Donald Trump welcomes Poland's request for permanent US military base

US President Donald Trump has said he is seriously considering establishing a permanent military base in Poland, at Warsaw's request. Such a move would fuel tensions between NATO and Russia. 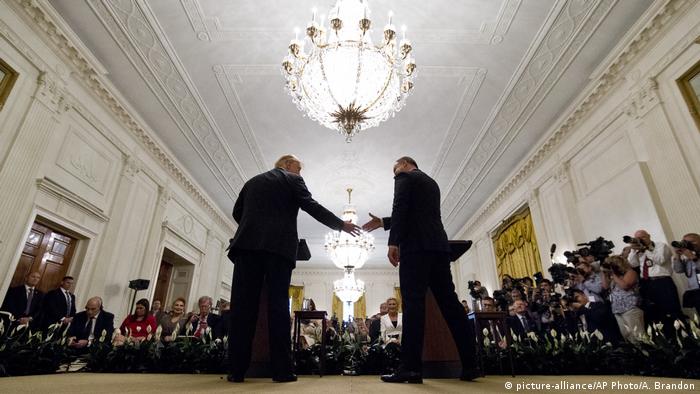 President Donald Trump has said he is considering Poland's request to establish a permanent US military presence on its soil.

"We're looking at it very seriously," Trump told reporters during a joint press conference with Polish President Andrzej Duda in Washington on Tuesday. "Poland is willing to make a very major contribution to the United States to come in and have a presence in Poland."

Duda used the press conference to make a direct appeal to Trump before the cameras, even saying he would name the new base Fort Trump.

"I hope you will take the decision to deploy more units and equipment," he said. "I would like to see a permanent American base in Poland."

According to reports, the Polish Defense Ministry has offered up to $2 billion (€1.7 billion) to fund such as base. Some 3,000 US troops are currently stationed in Poland as part of NATO's back-to-back rotation.

A permanent US military presence in Eastern Europe would add fuel to the tensions between NATO and Russia. In May, when reports of Poland's request first emerged, Moscow warned that the Western alliance's eastward expansion would undermine stability in Europe.

Poland joined NATO back in 1999, along with Hungary and the Czech Republic. Since then, despite Moscow's vocal opposition, a number of former Soviet states have joined the Western military alliance, including the three Baltic States on the Russian border.

Trump and Duda also used Tuesday's meeting in the Oval Office to discuss trade and energy policy. Trump took the opportunity to once again criticize the planned Nord Stream 2 gas pipeline linking Russia and Germany, describing it as "ridiculous" and bad for the German people.

The US president also announced he was considering a visa waiver program for Polish nationals.

Does Trump have a point about NATO?

Duda's visit to Washington prompted comparisons between the two conservative and increasingly populist governments. As the Polish president sat in the Oval Office, officials from Warsaw were in Brussels as part of an unprecedented EU hearing into accusations Poland has violated democratic norms and rule-of-law.

The EU has reprimanded Poland's euroskeptic government for pushing through a swathe of judicial changes, including forcing several Supreme Court judges to retire early and replacing them with its own nominees.

European Commission Vice President Frans Timmermans told reporters Tuesday there had been limited progress in Poland since the EU decided to launch an Article 7 procedure against the country — a process which could, in theory, see Poland lose its EU voting rights.

The Commission is expected file a lawsuit against the Polish government before the European Court of Justice on Wednesday.

The United States did not break from NATO, but President Donald Trump sent wildly conflicting messages at the Brussels summit. The uncertainty over the future of the alliance still remains, says DW's Barbara Wesel. (12.07.2018)