NATO summit: Poland pins its hopes on the USA

Poland is expected to use the Brussels meeting to urge a greater presence in Eastern Europe. Warsaw is also lobbying for what it regards to be a key guarantor for stability: A permanent US troop presence in the country. 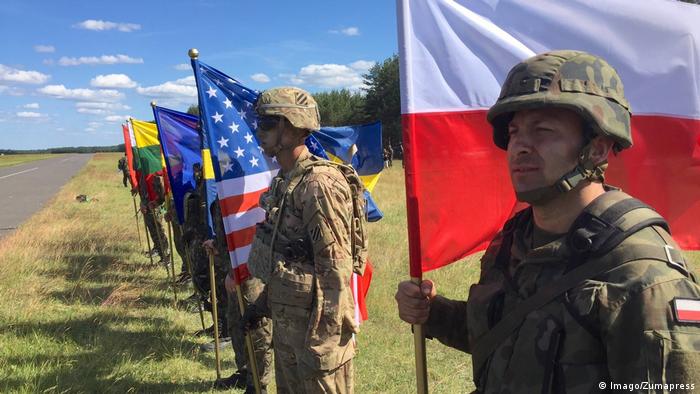 NATO is currently debating plans to expand its rapid deployment forces, but that in itself is not a true safety guarantee for Warsaw.

Polish Defense Minister Mariusz Blaszczak welcomes the new "4 x 30" NATO initiative that aims to significantly raise the troops' preparedness by 2020, but he only sees "real military potential" on the US side, and not among European NATO partners.

"We're striving for a permanent US troop presence," Blaszczak said, arguing that this is important for Poland and the Polish people. Thousands of US soldiers have been stationed in Poland since 2017 in the framework of the "Enhanced Forward Presence" NATO initiative.

These troops rotate every few months, and their numbers are not set. As far as the Polish government is concerned, only permanent military bases equal security.

And Warsaw is prepared to pay. A document entitled "Proposal for a US Permanent Presence in Poland" surfaced in the media in May, with the Polish government urging permanent deployment of a US armored division in the country. The Polish government will offer significant funding for this action, about $1.5 billion to $2 billion (€1.3 billion to €1.7 billion), "as it is important to share the burden of defense spending," according to the document.

The Polish Defense Ministry confirmed the document, which was not kept secret but sent to various institutions and think tanks, as real. The government argues it feels threatened by Russia. The US Senate Defense Committee has suggested the Pentagon assess the Polish proposal.

Recent media reports about US President Donald Trump's alleged plans to withdraw troops from Germany and move them to Poland raised hopes in Poland. The reports were denied, but a new debate about a permanent US military presence in Poland was already underway.

No matter their political convictions, most Poles — and not just supporters of the national-conservative PiS (Law and Justice party) government — are in favor of the plan. According to a recent opinion poll by the CBOS polling institute, 67 percent of Poles are in favor of stationing US soldiers permanently in the country.

The 1997 NATO-Russia Founding Act forbids stationing troops permanently on the alliance's eastern flank, but Warsaw doesn't see that as a problem. 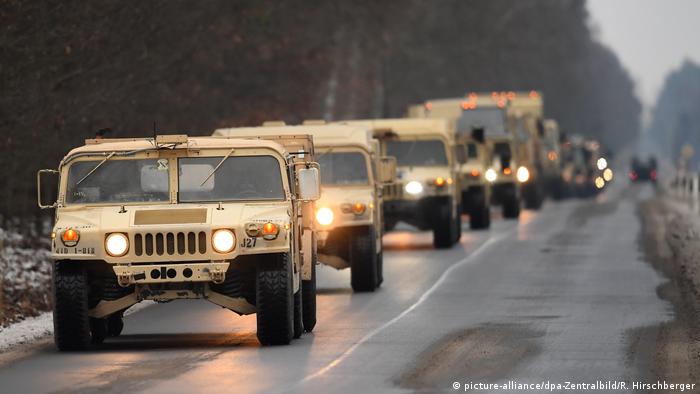 For many Poles, US military vehicles like these are a welcome sight

Poland would also regard a permanent US presence as a reward. The country has long been a model NATO member state, as it is one of the few states that actually spend the required 2 percent of the GDP on defense.

At a press conference with German Chancellor Angela Merkel in Washington in April, Trump sharply criticized an imbalance in payments in the alliance, while he praised Poland for its NATO commitment. "We appreciate it," he said. The NATO states' financial readiness is one of the issues sure to be addressed at the NATO summit in Brussels.

Poland also plans to shine a light on the entire region at the summit. A statement by the Bucharest Nine states last month stressed the importance of "further strengthening of the Alliance, most notably its deterrence and defense posture," as the countries "remain fully committed to implementing all the initiatives developed as part of NATO's forward presence on the Eastern flank."

The group that has since 2015 been trying to heighten awareness within NATO of the threat posed by Russia includes Poland, Slovakia, Hungary, Romania, Bulgaria, the Czech Republic and the Baltic States, Estonia, Lithuania and Latvia.

Poland wouldn't mind seeing Trump as the advocate of Eastern European interests in Brussels. It's not just about a stronger NATO presence, but also about history and shared values. Many Poles see it as a given that the US should be responsible for their security, as the country suffered at the hands of neighboring Germany and Russia in the past and feels cheated by other European states.

The PiS government agrees wholeheartedly with Trump's climate and migration policies, as well as criticism of the German-Russian Nord Stream 2 gas pipeline project. And there are concrete economic interests, too: Poland buys US aircraft interceptor systems and liquefied natural gas, the latter in hopes to decrease its dependency on shipments from Russia.

There is a bit of uneasiness with regard to the fact that during the election campaign Trump called NATO obsolete, and the sure knowledge that the US president meets with Russian President Vladimir Putin right after the NATO summit. But it doesn't shake Poland's great sympathy for the US and the people's belief that America represents safety and stability.