NATO members are worried that US President Donald Trump could cause serious damage to the alliance. These are testing times for the trans-Atlantic relationship, DW's Bernd Riegert writes. 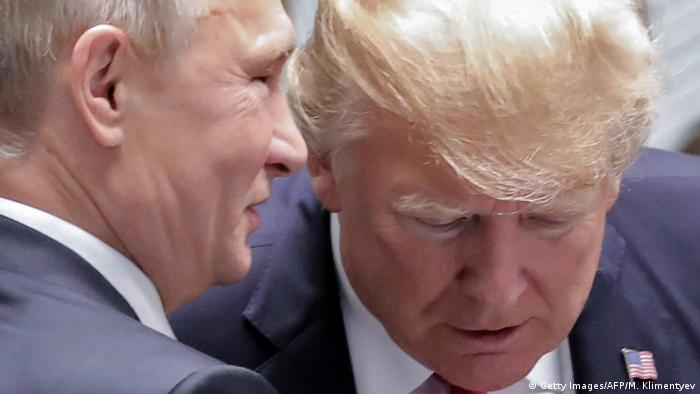 Donald Trump is bringing his show to Europe. And it is bound to make headlines. On Wednesday, the US president will be in Brussels for the NATO summit, where he will likely continue to ruffle feathers. Two days later, the president will meet Queen Elizabeth in England. And then, on July 16, Trump will travel to Finland to meet his Russian counterpart, Vladimir Putin, which could mark the beginning of a new, deep bond between the presidents.

There is great anxiety at NATO about how the meeting will go. It is to be expected that Mr. "America First" will cause irritation among his allies for stressing defense-spending quotas. Though European members have raised their expenditures as promised, Trump remains dissatisfied. In a recent speech in the state of Indiana ahead of the US midterm elections in November, Trump made clear his anger about Germany in particular. He directly attacked Chancellor Angela Merkel, claiming that the United States pays for Germany's security, but receives little in return. And then he accused Germany of prioritizing energy deals with Russia and leaving the United States to foot the bill. Trump wants to change this. And he has already indirectly threatened to pull US troops from Germany if the country does not increase its defense spending.

In the worst-case scenario, NATO diplomats reckon, the United States could demand that European members directly pay for US troops to be stationed on the continent: Cash for security. That would represent a radical break with the philosophy of NATO, an alliance built on shared political beliefs. But that is exactly what Trump appears to have in mind. He is always out to secure his advantage, and to do it he will stop at nothing; he will even affront long-term allies. This mentality has already manifested itself at the recent G7 summit in Canada. So, one can expect Trump to adopt a similarly uncompromising stance in Brussels on Wednesday. The European members will have to prepare for Trump attempting to tie trade issues to security policy. It is possible that he will threaten that "either you lift European import tariffs on US goods, or you lose the US nuclear deterrent against Russia."

The president prefers the company of dictators and autocrats to that of trusted allies. But NATO will make it clear that ever more members have begun increasing their defense spending, edging toward the target of 2 percent of GDP. Germany's not there yet, and its military, the Bundeswehr, remains woefully underfunded. The scenario is similar for other armies across Europe. Merkel has no option but to acknowledge this fact — and Trump will gladly seize this opportunity to drum up domestic support ahead of the elections.

Poland's Defense Ministry has suggested that it would be willing to pay $2 billion (€1.7 billion) a year to station additional US troops on its soil. That would be music to Trump's ears, and he may seek to establish similar deals with other NATO members. The alliance, however, can only hope that the president continues to stand by NATO's principle of mutual defense and does not make it conditional on his getting his way. After all, on the campaign trail just two years ago, Trump referred to NATO as "obsolete." That's a troubling prospect, given that so far no real progress has been made on establishing an EU-wide military alliance that could serve as an alternative to NATO. Creating such a force would take years, and it would not be able to match the US's military might.

NATO diplomats, many of whom consider Russia a serious threat, are also concerned about Trump's meeting with Putin. Members hope to agree on a list of thorny issues that they expect Trump to raise with his counterpart. Among them are the ongoing conflict in Ukraine and the issue of cyberwarfare. But nobody can predict what Trump will do in Helsinki. He claims to be well-prepared for the encounter. But what does that mean, exactly? Will he raise NATO's concerns with Putin? Or will he further alienate his allies?

One thing is certain: However Trump's meetings with NATO, the Queen and Putin turn out, the president will tell Americans that it was all a major success.

Every day at 1830 UTC, DW's editors send out a selection of news and features. Sign up to receive it here.

Opinion: Egypt is synonymous with hopelessness 3h ago