Merkel said that the country was likely a decade off from the required 2 percent. Germany has long avoided increased spending on defense, despite international pressure. 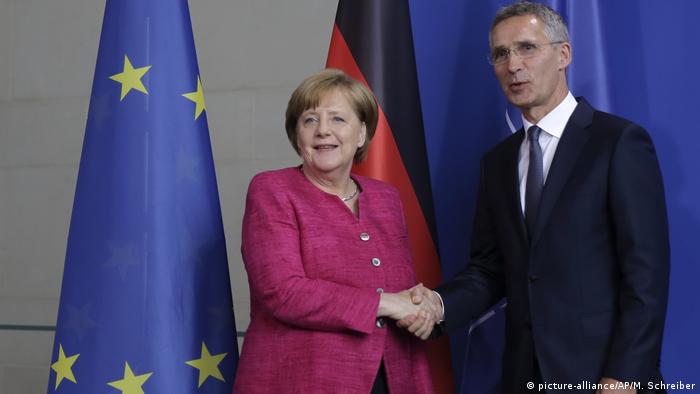 German Chancellor Angela Merkel said on Friday that Germany would not be able to meet its NATO spending obligation until well after 2024. All members are encouraged to spend 2 percent of GDP on defense as members of the alliance, though few have met the target.

After meeting with NATO Secretary-General Jens Stoltenberg, Merkel said that the process "may seem too slow, but things are going in the right direction."

Merkel said that Germany had a new framework for defense spending that would see an increase to 1.5 percent of GDP by 2024.

Defense spending is hugely unpopular in Germany, and its military has long been suffering from outdated equipment and a lack of necessary supplies. The constitutional limitations on what Germany's postwar military is permitted to do is also often cited as a reason against increased defense spending.

However, uneven spending between NATO allies has become a major bugbear for US President Donald Trump, who blasted Europe during a recent G7 meeting in Canada.

"The US pays close to the entire cost of NATO — protecting many of these same countries that rip us off on trade ... The European Union had a $151 billion surplus — should pay much more for military!" he wrote on Twitter.

The US pays about 22 percent of the 29-nation organization's budget.

While NATO chief Stoltenberg agreed with Merkel that there should be "trans-Atlantic unity" between the allies, he, too, pressed her on Germany's defense spending, considering its relatively healthy economy.

"I encourage Germany to do more because Germany is the biggest economy in Europe, so it really matters what Germany does," he said.

"We need German leadership in this issue. We're moving in the right direction, but we still have a long way to go."

Near-bankrupt Greece famously spends a far higher proportion of its GDP on the military than Germany, although there are numerous historical reasons for this on both sides.

NATO defense ministers have unveiled a new plan to bolster troop numbers, aircraft and navy vessels on the European continent. The initiative comes despite a festering trans-Atlantic trade dispute. (07.06.2018)