EU Commission ups the ante on Poland over judges

The EU leadership has set a deadline for Poland to fix its law on retiring Supreme Court judges or risk a lawsuit. The dispute happens as Brussels and Warsaw are locked in a much bigger conflict over rule of law. 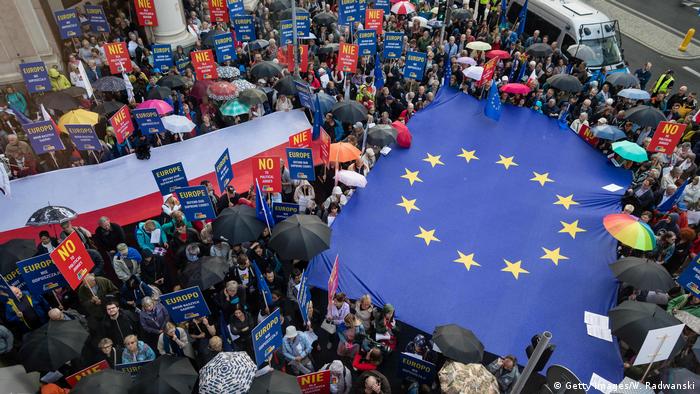 The EU's top executive body, the European Commission, announced on Tuesday that Poland now has one month to amend its controversial law that would retire 27 Supreme Court judges. If the demands are not met, the EU Commission is likely to sue Poland before the European Court of Justice (ECJ) in Luxembourg.

Last month, Poland's ruling "Law and Justice" (PiS) party affirmed that judges would be required to retire at 65 instead of 70 years of age. The move would affect 27 of 76 Supreme Court judges, cutting short their six-year-terms, and retire the rebellious Chief Justice Malgorzata Gersdorf. The PiS says the changes are necessary to jolt the justice system, but Gersdorf and other judges describe the move as a "purge" and refuse to step down.

The EU commission has already urged Poland to change the law, which the government refused. Polish authorities also sent out a 36-page document to justify their position, and said the judges would be able to ask the Polish president for an extension of their terms.

On Tuesday, however, the EU Commission restated their criticism of the law.

"The response of the Polish authorities does not alleviate the Commission's legal concerns," officials said in a statement.

'Defend' until the end

In response, Polish officials  accused the Commission of acting "politically" and vowed to fight any court case.

"I believe we will defend our position until the end," said deputy justice minister Lukasz Piebiak.

"We certainly don't see any reason to abandon court reforms that are under way, and we are convinced that they will continue to be put into effect, because that is what the Polish people want."

If the ECJ sides with the EU Commission, Poland could face paying huge fines.

The law on retiring judges is only one segment of a larger standoff between Brussels and Warsaw over the moves made by the right-wing PiS.

Read more: Poland's judicial overhaul and the EU... It's complicated

In December 2017, Brussels triggered the so-called Article 7 procedure over judicial reforms in Poland which critics describe as muzzling the country's judges. The procedure, which had never been invoked before, could lead to Poland's voting rights being suspended. This is only possible if all other EU members vote in favor of it, however, and the Hungary's Viktor Orban has already announced he would not endorse the measure.

EU members can, in certain cases, refuse to enforce Polish arrest warrants, the EU's top court has ruled. Previously, a Polish man cited changes to Poland's judiciary as a reason for halting his extradition from Ireland. (25.07.2018)