The European Parliament has backed a plan for unprecedented punitive action against Poland for undermining the rule of law with a series of judicial reforms. Poland could, theoretically, lose EU voting rights. 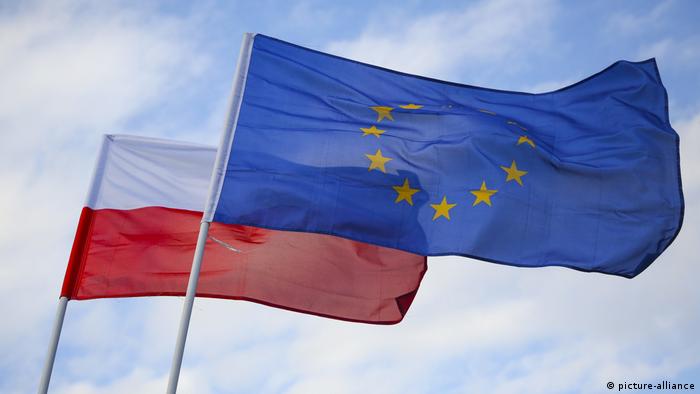 The European Parliament has backed a resolution supporting a recommendation from the European Commission to invoke Article 7 against Poland. The lawmakers voted in favor of taking action against Poland for undermining the EU rule of law with reforms to the Polish judiciary.

Following two years of talks with Poland's ruling nationalist Law and Justice party (PiS) that have achieved no results, the European Commission, the bloc's executive arm, last December recommended Article 7 be triggered against the Polish government, a move that could result in the suspension of its voting rights in the EU, unless it concedes ground by March 20.

The European Parliament on Thursday voted 422 in favor to 147 against, with 48 abstentions, on a nonbinding resolution to support the Commission's action against the EU's largest former communist state.

Poland has adopted 13 laws in the past two years that created a situation where the state "can systematically interfere with the composition, powers, the administration and the functioning" of the judiciary, Commission Vice President Frans Timmermans said when he announced the Article 7 decision in December.

The Commission said one of the most controversial reforms was the Polish government's decision to grant the president greater powers to appoint judges to the Supreme Court, whose duties include confirming election results.

"Despite efforts for a constructive dialogue for 2 years, we have concluded that there is a clear risk of a serious breach of the rule of law in Poland," the Commission said in a statement posted on Twitter in December.

"Judicial reforms in Poland mean that the country's judiciary is now under the political control of the ruling majority. In the absence of judicial independence, serious questions are raised about the effective application of EU law," it added.

Poland's new prime minister, Mateusz Morawiecki, has wanted to ease tensions since the start of this year and is due to meet Commission President Jean-Claude Juncker on March 8.

Read more: Opinion: Poland will be the EU's biggest challenge in 2018

Taking away Poland's EU voting rights would still be unlikely as it would require agreement from all the member states. Hungarian Prime Minister Viktor Orban has said he would block any such action against his Polish ally.

It is possible the dispute could also see member states cut funding allocated to Poland in the next EU budget, which starts from 2021. Poland is the biggest recipient of EU handouts for infrastructure and other projects.

Poland is due to publish a white paper to explain some 13 laws the PiS government has passed on the courts.

Dariusz Zawistowski, the head of Poland's top judicial watchdog, has resigned over controversial court reforms introduced by the PiS government. He has warned that the reforms would undermine the body's independence. (12.01.2018)