The European Commission has launched proceedings against Poland for breaching European common values and rule of law. While only a warning, Article 7 could lead to sanctions and a suspension of EU voting rights.

In a statement posted on Twitter, the Commission said "despite efforts for a constructive dialogue for 2 years, we have concluded that there is a clear risk of a serious breach of the rule of law in Poland."

"Judicial reforms in Poland mean that the country's judiciary is now under the political control of the ruling majority. In the absence of judicial independence, serious questions are raised about the effective application of EU law," the Commission added.

Polish President Andrzej Duda rejected the EU's rhetoric as lies and said its push to invoke Article 7 was driven by political motives.

"Very many representatives of European institutions tell lies about Poland; They're lying. They lie when they say that there are changes in Poland that lead to violations of the rule of law because we are improving democratic standards," Duda told Poland's Polsat commercial television.

"Unfortunately, I believe there is a lot of hypocrisy in the actions of the European Union. I'm sad to say it, but that's what I think," he added. 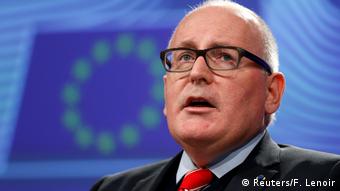 Announcing the decision to launch the censure process against Poland, Commission Vice President Frans Timmermans said the ruling Law and Justice party (PiS) had adopted 13 laws in the last two years that  created a situation where the state "can systematically interfere with the composition, powers, the administration and the functioning" of the judiciary.

One of the most controversial reforms in Poland, the Commission said, was the government's move to grant the president greater powers to appoint judges to the Supreme Court, whose duties include confirming election results.

EU member states must now decide by a two-thirds majority whether they agree with the Commission's recommendation to trigger Article 7. If agreed, Poland could see its voting rights suspended.

However, Poland also has three months to remedy the situation by implementing a series of recommendations by the Commission aimed at restoring judicial legitimacy.

PiS vows to carry on

PiS spokeswoman Beata Mazurek dismissed the Commission's decision to trigger Article 7, saying the decision "had no merit" and that it was "solely a political decision."

Justice Minister Zbigniew Ziobro, who also serves as chief prosecutor as part of the judicial reforms, said Poland's government "must continue the reforms."

Just hours after Wednesday's EU rebuke, Duda signed two of the offending judicial reforms into law, prompting accusations from opposition politicians that the government was "going to war with the EU."

Poland's national-conservative government has justified the measures, claiming the courts need to change because they are inefficient and remain steeped in a communist-era mentality.

Ahead of Timmerman's announcement, the German government said it would support the Commission if it decided to open proceedings against Poland.

"If it comes to the decision we will support," German Chancellor Angela Merkel's spokesman Steffen Seibert told reporters on Wednesday morning. Earlier reports suggested that France would back the move.