Opinion: Poland will be the EU's biggest challenge in 2018

Poland refuses to reinstate the rule of law, yet happily accepts EU funding. Authorities in Brussels can no longer accept this. It puts the bloc at risk of falling apart, says DW's Bernd Riegert. 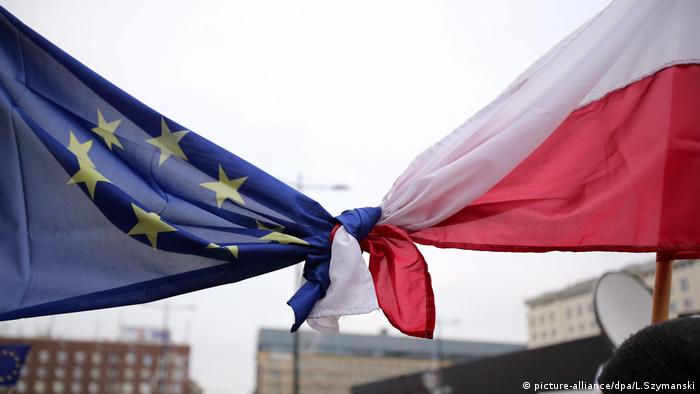 Organizing Britain's voluntary departure from the European Union in 2018 won't be simple — but at least all of the bloc's remaining 27 member states are on the same page.

Even more difficult will be punishing one or several EU member states who blatantly breach the bloc's principles, yet insist on remaining in the EU.

If Poland does not change course, the EU will for the first time in its 61-year-history officially declare in spring 2018 that one of its member state no longer upholds the rule of law and therefore no longer qualifies as an EU member state.

This procedure, known as Article 7 of the Treaty of Lisbon, would produce a rift in the EU that stems out of deep-seated distrust between various member states.

This dispute is about much more than Poland's ideologically stubborn ruling PiS party that accuses the EU of trying to undermine the country's sovereignty — something that took a long time and much endurance to achieve. The dispute also encompasses Poland's neighboring countries that appear to not yet have fully completed the transition from erstwhile communist dictatorships to societies based on the rule of law. The populist governments of Poland, the Czech Republic, Slovakia and Hungary in particular, are refusing to accept EU law or implement majority decisions regarding migration issues, and are thereby disregarding the very rules they themselves signed up to.

A matter of principle

It appears that Poland's Jaroslaw Kaczynski, Hungary's Viktor Orban and their like-minded peers need reminding that their countries helped overcome the division of Europe when they voluntarily joined the EU back in 2004. The overriding question in 2018 will be: Can the EU member states force the four Visegrad countries (Poland, the Czech Republic, Slovakia and Hungary) to comply with and respect the rule of law?

Or will one sit back and watch these nationalist governments continue down their respective paths? This could make it impossible for the EU to continue operating as it does today. The EU as we know it would be finished.

It may be tricky to find a consensus over how to deal with these countries given that many right-wing populist parties have now joined other European governments, as well. Austria is the latest example. There, the nationalist FPÖ party has joined a coalition government. Italy might be next. Elections will be held in March 2018 and the country's Five Star Movement could do well.

Germany, France, Belgium and other EU states who want to preserve the bloc and contribute to its funding, will have to threaten to cut off the money supply to Poland and its neighboring renegade states.

This is what's most perplexing about Poland's and Hungary's nationalist babble: Both countries are more than happy to accept EU funds, while simultaneously railing against the EU system and disregarding its principles. It's paradoxical.

Thus far, the EU's threats have fallen on deaf ears. But things could change in 2018 when negotiations over the bloc's budget as of 2021 commence. So far, Poland has profited handsomely from EU structural funding and agricultural subsidies. And it won't want to be cut off from future funding. But things won't look too rosy for Poland if it's caught up in the Article 7 procedure. The EU could expel Poland from the single market before 2021 — it, too, is tied to the rule of law. This would deal a heavy blow to Poland's economy and severely restrict movement for Polish workers.

One might hope that the Polish electorate opts to vote the ruling national-conservative government out of office in two years time. Otherwise, Poland might have to be expelled from the bloc. Or worse yet, right-wing populist pressure could gradually transform the EU from a community of shared values back into a mere customs union.

The EU Commission is triggering the bloc's rule-of-law mechanism against Hungary — the first country to face proceedings under the tool — over law violations. It means the country could face major funding cuts.