Polish lawmakers have approved changes to the judiciary which would give parliament control over the selection of judges. The decision came in defiance of EU standards for member states to keep an independent judiciary. 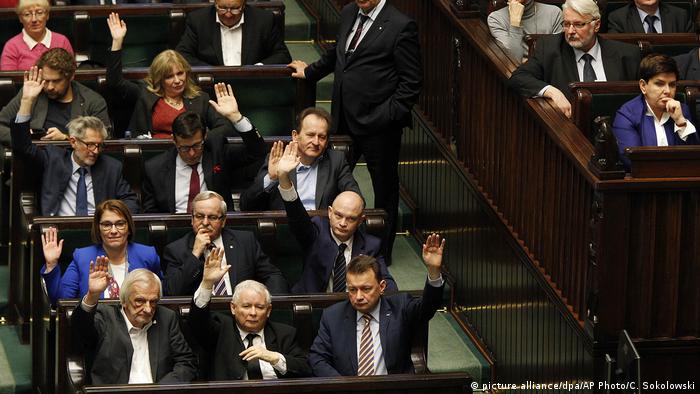 The lower house of parliament voted 237-166, with 22 abstentions, to pass the bill on appointments to the National Council of the Judiciary (KRS) — as opposition lawmakers shouted "dictatorship!"

The legislation, which would give lawmakers the right to choose 15 out of 25 judges on the KRS, will likely heighten tensions between Poland and the EU if it is agreed by the Senate and Polish President Andrzej Duda. The EU has threatened Poland with taking legal action over proposed reform which it says would subvert the rule of law. 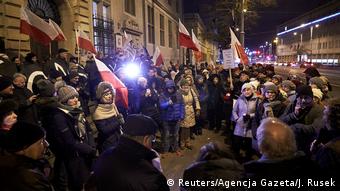 The changes have attracted protests in various cities, including this one in the northern Polish city of Gdansk

Poland's euroskeptic Law and Justice (PiS) party, which holds a majority in the lower house of parliament, argues that the country's judiciary needs to be changed for its courts to become more efficient. Critics, however, see the proposed reforms as part of a broader shift towards authoritarianism by the deeply conservative government. The EU meanwhile regards the proposed changes as a threat to the impartiality of courts, as it would give politicians a say in appointing judges.

A lawmaker with the ruling PiS party told the Associated Press news agency, however, that the much-criticized legislation would put courts at the service of regular citizens. Parliament member Wojciech Skurkiewicz said that judges would "now be equal to ordinary people, they cannot be above them."

"The judges are to serve the people, not humiliate them, as the party believes has been the case."

The EU is also facing a standoff with the PiS-led government over a number of other issues, including Poland's migration policy and the government's efforts to take control of a number of state institutions such as public media.

Under the proposed legislation, which is heavily supported by PiS lawmakers, parliament would have a free hand in choosing members of the KRS, the powerful body in charge of deciding judicial appointments. This role was previously reserved for the judges themselves. 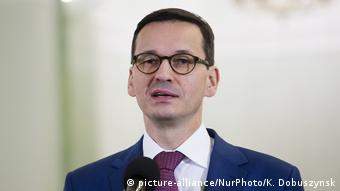 The KRS has repeatedly voiced its opposition to the plans. Its spokesman Waldemar Zurek said that the changes would "hurt the citizens because politicization of courts means that no citizen will be assured that a judge presiding over a case isn't being influenced by politicians."

Constitutional law experts at the Council of Europe also said that the proposed reforms jeopardized all aspects of the judiciary and would "lead to a far reaching politicization of this body."

Lawmakers also voted 239-171, with 24 abstentions, to pass a law on the Supreme Court, whose duties include confirming election results. Polish President Andrzej Duda had vetoed an earlier version of the bill during the summer. The updated one which was passed by the lower house of parliament would give the president greater power over the naming of judges to the high court. Duda indicated in the past that he would sign the bill into law if its updated version was passed.

The vote came a day after the PiS Party announced that Poland's finance minister Mateusz Morawiecki would replace Prime Minister Beata Szydlo following reports of infighting within the party. The outgoing prime minister said that she would continue to fight for the government's conservative program in another government position, with one official suggesting that she would serve as deputy prime minister.

Despite all the criticism abroad, Poland's PiS government remains one of country's most popular governments since the collapse of communism in 1989. It has been credited with lowering unemployment levels, increasing public spending and its support of the traditional Catholic values that many Poles believe in.

The party faces three consecutive years of elections. A local ballot will be held in 2018, a parliamentary vote in 2019, and a presidential election in 2020.