Dariusz Zawistowski, the head of Poland's top judicial watchdog, has resigned over controversial court reforms introduced by the PiS government. He has warned that the reforms would undermine the body's independence. 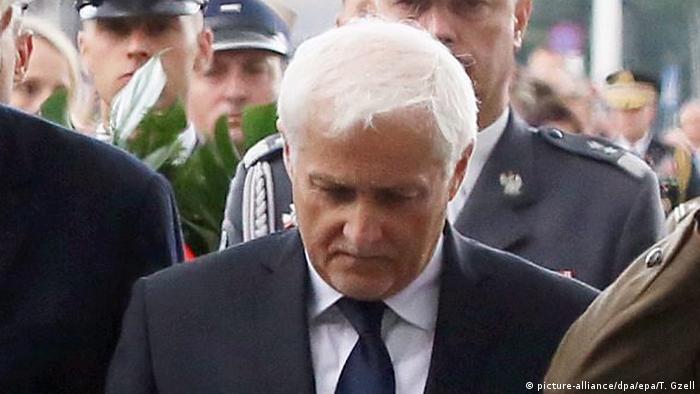 The president of Poland's National Council of the Judiciary (KRS), the body overseeing judicial impartiality, announced on Friday he was resigning "as a sign of protest" over the governing Law and Justice (PiS) party's controversial court reforms.

Dariusz Zawistowski said the government's new regulations imposed on the KRS would reduce its independence. The new laws will allow lawmakers to choose the body's members and prematurely terminate its current term.

Zawistowski's resignation comes as part of a wider judicial reform package that will also grant the government greater control over Poland's Supreme Court and Constitutional Court.

KRS spokesman Waldemar Zurek said Zawistowski's decision to step down was "a cry of despair" for the organization and that "the laws reforming the judiciary are on several grounds a violation of the Polish constitution."

Zurek said Zawistowski will officially resign on Monday, "on the eve of when the laws reforming the judiciary come into effect."

The PiS began planning sweeping changes to Poland's judiciary shortly after coming to power in late 2015. It maintains that the overhaul is necessary to rid the judicial system of its corruption-ridden Communist past.

The nationalist-conservative government's court changes have plunged Poland into a political crisis and put in on a collision course with the European Union.

Brussels, which has decried the reforms as a "systemic threat" to Poland's rule of law and democratic principles, launched unprecedented disciplinary proceedings against the country last month. The European Commission's decision to trigger Article 7 of the European Treaty could lead to sanctions and see Poland's EU voting rights suspended.

On Wednesday, Donald Tusk, the EU Council president and former prime minister of Poland, warned that the PiS government could push the country towards exiting from the EU, particularly if the balance of payments into Brussels ever saw the country become a net contributor. Tusk told Polish media: "For PiS the benefit of being in the EU boils down to the balance of payments, with a complete disregard for other benefits like the common market, legal order, guaranteed security, etc."

Poland's new Prime Minister Mateusz Morawiecki, who has chosen by the PiS to mend ties with Brussels, said on Wednesday that he hoped the Commission would understand the basis for the party's reforms without forcing it to make any concessions.