New laws are putting Poland's judiciary under government control. The minister of justice can name and recall judges, placing ones critical of the country's leaders at risk, as one Warsaw justice is finding out. 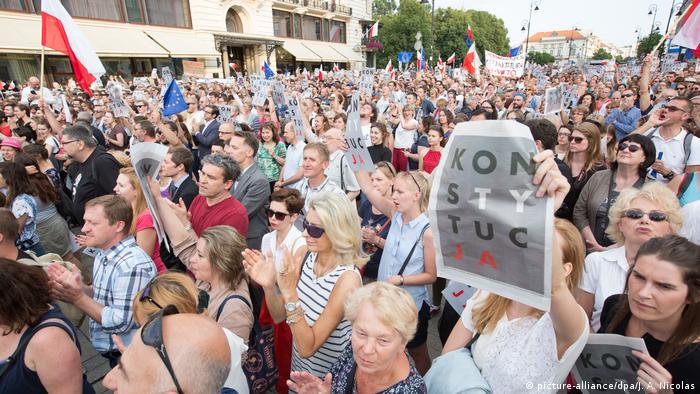 "The constitution is our highest law," Waldemar Zurek told a cheering crowd of demonstrators outside the parliament building in Warsaw on a sunny July afternoon. "That's why I will protect it until the end. This was the oath I swore."

Zurek is a judge on Krakow's district court and spokesperson for Poland's National Council of the Judiciary, which oversees judiciary independence. It is this council the ruling national-conservative Law and Justice Party (PiS) hopes to bring under its control with a series of judicial reforms.

"It is a war on the rule of law," Zurek told DW. Though the government wants to change the state with "simple laws," he said, "it lacks the power because it lacks the necessary constitutional majority in parliament."

The minister of justice already has the power to remove and replace the heads of any normal court, thanks to a new law now in effect.

Zurek's willingness to speak out has come at a price. For months, he has been subject to what he calls "an absurd labyrinth." An investigation was launched, he said, after the public prosecutor's office learned from media reports that he had told his colleagues about receiving threatening letters. Zurek himself had, however, not filed any report with the police. Soon enough, he said, the investigation's focus shifted from the letters to his own affairs. 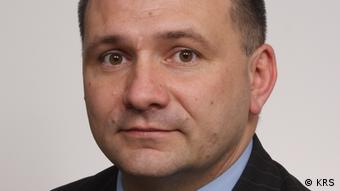 The judicial spokesperson fears his computer will be seized for the information and contacts it contains. "They've already looked at my phone records - without my permission," he said, which Polish law allows. The threatening letters were just a pretext to monitor him, Zurek said.

An anticorruption probe confirmed the judge's fears, which "just happened" to coincide with an audit of his tax records, he said. He considers investigators' handling of him to be harassment.

The anticorruption authority declined DW's request for an interview, but said in a statement that the tax audit was routine. Despite hinting to an internet report of the judge's "considerable assets," the authority presented no concrete accusations or charge.

Zurek is no stranger to scrutiny. PiS allies have accused him on state-run media of being a representative of the "interests of a class of judges comprised of old communists," despite the fact that during the Soviet era, Zurek was part of the opposition movement against Poland's communist government. "The government presents us as an elite, connected to the old system, out to block reform," he said.

Prospects of a change in course are dim, as far as the 47-year-old judge sees it. Neither protest at home nor criticism from Brussels is likely to stop PiS leader Jaroslaw Kaczynski from trying to restructure the Polish state. Many, he believes, will blindly follow him on his quest to put the judiciary firmly under government control.

Poland's Constitutional Tribunal is already run by government-friendly judges. Though President Andrzej Duda blocked two judicial reforms, the law granting the Justice Minister power over judges went into effect a few days ago. Kaczynski is still pushing for the right to oversee the National Council of the Judiciary and the Supreme Court, which has the authority to confirm election results.

Since Zurek's appearance at the demonstration in Warsaw, a disciplinary proceeding has begun against him, he said, due to his alleged political activities. He presumes it is just a matter of time before he loses his position on Krakow's district court. However, his removal will not be voluntary, he said.