After days of public outcry, Polish President Andrzej Duda has said he will block two bills to reform Poland's judiciary. However, he endorsed the third one, with the government pledging not to back down on their plans.

Polish Prime Minister Beata Szydlo said Monday night that 'necessary' judicial reforms had been promised to voters and that the president's move would only slow down the process.

In an unexpected move earlier in the day, President Duda refused to endorse two of the three reform bills which critics say would give the ruling Law and Justice Party power to choose judges.

"I have decided that I will send back to Sejm [lower house of parliament], which means I will veto the bill, on the Supreme Court, as well as the one about the National Council of the Judiciary," Duda said at a televised press conference.

One of the bills Duda said he would veto was intended to put new controls on the Supreme Court, making the justice minister, who is also prosecutor general, responsible for appointing judges. The second bill facing a veto would give lawmakers far reaching power over the National Council of the Judiciary. The committee is made up of a mixture of judges and politicians and recommends judges for appointment.

However, the president signed the third bill, which grants the justice minister the power to hire heads of local courts.

During the Monday press conference, Duda restated that the judiciary needs urgent reforms, but stressed that those reforms must not lead to fears of an oppressive government. 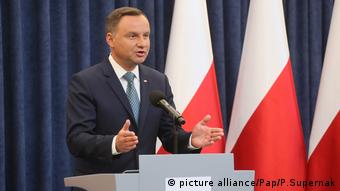 Poland's President Andrzej Duda is a lawyer by profession

"The changes must be implemented in a way that does not create a division between the state and the society," said Duda.

Ruling party politicians met with Duda on Monday in an unsuccessful bid to convince him to support the bills. After the meeting Duda reiterated his decision to veto the judicial reform. Spokesman Krzysztof Lapinski said on TVN24 that the president was not "deaf and blind" to the nationwide protests, and that his decision was based on deep analysis of the facts and on consultations.

His decision comes after the proposed judicial overhaul riled the opposition and Poland's foreign partners. Thousands of people protested against the reform on the streets of Warsaw and other Polish cities last week, urging Duda to use his veto power. The EU Commission threatened to suspend Poland's voting rights over the move. Despite the protests, however, the bills were backed by the majority of lawmakers in the Polish parliament on Saturday.

Veto is 'a great success'

Duda's decision also marks his first open break with Law and Justice Party leader Jaroslaw Kaczynski, believed to be the most powerful politician in the ex-communist country. While Kaczynski holds no high-ranking position in the government, he has the reputation of being the undisputed ruler in the conservative ruling faction. The former prime minister also hand-picked Duda as the party's presidential candidate in 2015. 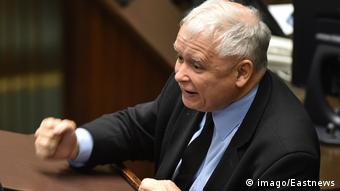 Commenting on the veto, Polish Deputy Prime Minister Mateusz Morawiecki said he was "disappointed" and surprised by the president's decision.

In turn, the government's opponents praised the Monday announcement.

"What we had was not a reform, but appropriation of the courts. I congratulate all Poles, this is a great success, really," said Katarzyna Lubnauer, head of the parliamentary caucus of the opposition party Nowoczesna.

However, DW Polish correspondent Wojciech Szymanski says that the political battle is far from over, as Duda endorsed the third bill on local courts.

"The president also said he would prepare his versions of the bills on the Supreme Court and the [Judicial] Council," Szymanski told DW News. "I think the government will later somehow get their influence on the other courts as well."

The Polish currency, the zloty, rose immediately after Duda announced his decision.

In an interview with Die Welt newspaper, MP Michael Roth, also state minister for European affairs at the German foreign ministry, said Europeans could be proud of the massive street protests in Poland.

"The question now is whether President Duda's veto will truly prevent curtailment of judicial independence in Poland," Roth said. "[The EU] is not just a cold internal market, but above all a community of values."