Freedom leader Walesa has urged the younger generation in Poland to take action against a controversial judicial reform bill. Opponents of the new law say it would put an end to an independent judiciary.

The former president of Poland and iconic freedom fighter Lech Walesa spoke to protesters Saturday evening in the northern port city of Gdansk, urging them to continue to fight for the nation's democracy and against plans to reform control of the judicial system.

Protests broke out across Poland on Saturday with Poles taking to the streets to voice anger over the senate's green light earlier in the day of the ruling conservative party Law and Justice's (PiS) legislation that would give the government control to select supreme court judges. 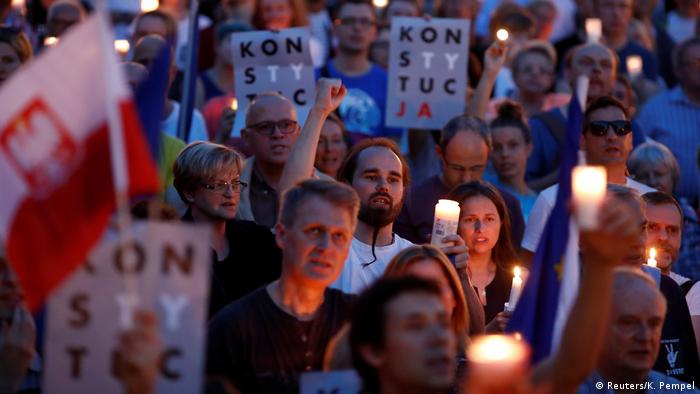 In his speech to the protesters, Walesa invoked the Solidarity strikes he lead in his hometown of Gdansk in the 1980's, a movement that helped lay groundwork for the eventual downfall of the communist government and Poland's transition to democracy.

"Our generation succeeded in putting Poland back on track and ensuring the separation of powers," the 73-year-old said. "We cannot allow anyone to destroy that," he added, highlighting that the separation of the legislative, executive, and judicial power was one of the most important accomplishments of the Solidarity movement.

"In 1989 we gave you a democratic Poland. You must fight for it with all means," he said.

Walesa, who won the 1983 Nobel Peace Prize for his leadership in founding the only free trade union in the Soviet bloc, also said that "despite my health, I will always be with you." He has recently undergone cardiac testing. 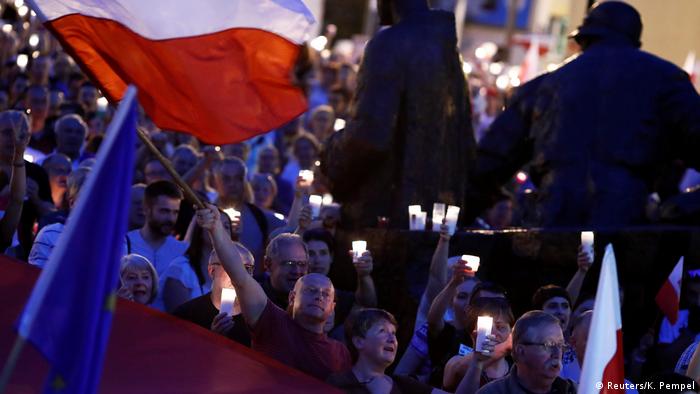 Read more: 'Somebody has stolen Poland and its values'

Thousands of protesters poured on to the streets in numerous Polish cities in the hours after Poland's upper house approved the PiS judicial reform measure. The lower house had approved the bill on Thursday. The legislation now needs the signature of President Andrzej Duda within 21 days to go into effect. As a member of the PiS, Duda is likely to sign the legislation. However, he could also veto it or send it to the constitutional court for review – measures which protesting Poles urged him to do.

In the streets, some demonstrators held up signs reading "3 X veto" while other placards read "Constitution" – a cry out against the bill that, protesters argue, undermines Poland's constitutional structure.

Proponents of the bill from the PiS, such as party leader Jaroslaw Kaczynski, say the proposed reforms will help remove former communists who have remained in the justice system since Poland's transition to democracy.

At present, supreme court candidates are selected by an independent body made up of judges with a few politicians.

The European Union (EU) has threatened to sanction Poland if Duda signs the bill into law. However, sanctions would require unanimity from the bloc's 27 member nations, and Hungarian Prime Minister Victor Orban said on Saturday that he would fight to defend Poland from what he called the EU's "inquisitorial campaign."

Former Polish President Lech Walesa has denied cooperating with Communist intelligence agencies during the Soviet era. He did, however, admit to making a "mistake." (19.02.2016)