The EU executive has warned it will launch legal procedures and sanctions against Poland if controversial judicial reforms are passed. The EU said it views the reforms as an assault on judicial independence.

The European Union executive on Wednesday warned Poland to halt controversial supreme court reforms that threaten judicial independence or else face unprecedented sanctions by the bloc.

After a meeting of the European Commission in Brussels, commissioners threatened to sanction Poland and suspend its voting rights in the Council of Ministers, a top EU decision making body.

"Recent measures taken by the Polish authorities on the judicial system greatly amplify the threat to the rule of law in Poland," European Commission Vice President Frans Timmermans said.

Read more: What are the Polish court reforms

"If implemented in their current form, these laws would have a very significant negative impact on the independence of the judiciary and would increase the systemic threat to the rule of law in Poland," he added.

Timmermans said the proposed content of the draft laws and the voting process are still incomplete so the Commission could not make a formal decision yet, but that "we are getting close to triggering Article 7."

Procedures for a breach of EU law could be launched as early as next week.

Article 7 is a never-before-used sanction against EU members who violate fundamental rights.

Since being elected to power in 2015, the governing nationalist Law and Justice (PiS) party, has sought to expand its influence over the courts and media, prompting the European Union to launch a review of the rule of law in Poland last year.

Read more: Opinion: Reforms are a catastrophe for democracy 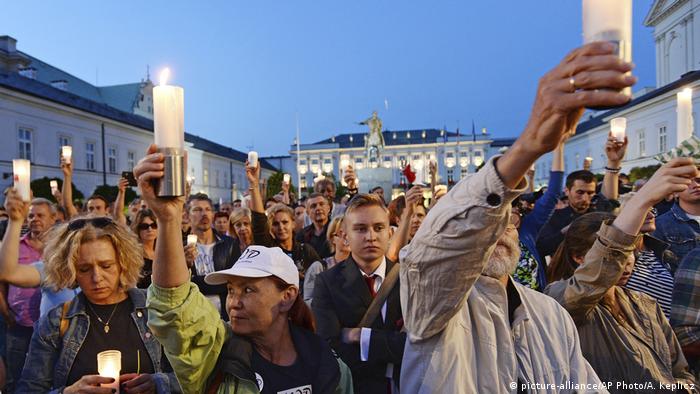 The proposed changes have brought thousands of protesters out on the streets.

Polish lawmakers sent a controversial draft bill to revamp the supreme court to a parliamentary committee on Wednesday after a number of heated exchanges late on Tuesday forced the deputy speaker to suspend proceedings overnight.

If approved, the legislation would trigger the immediate dismissal of current judges in the Supreme Court and give parliament control over the National Council of the Judiciary, a body responsible for maintaining the independence of the judiciary. The reforms would also give the justice minister authority to appoint chief justices of common courts.

The opposition has warned that such a change will politicize the judiciary and threaten the separation of powers.

Politicians from the PiS party passed the bill in its first reading on Tuesday before moving on to the second and final reading. But opposition members keen to delay the bill's passage for as long as possible submitted more than 1,000 amendments.

The government says its judicial reforms are necessary measures that will make the courts more accountable. The supreme court bill still needs the approval of the upper house, but is expected to pass as the PiS controls both houses.

President Andrzej Duda, who is closely allied with PiS, said Poles were "not satisfied with how the justice system functions" and that there was a need for "smart reform."

But during Tuesday's session, he unexpectedly put forward a proposal of his own - warning he would only sign the bill into law if parliament agreed to increase the majority needed to appoint the panel that would pick future judges.

Both houses last week adopted separate legislation giving parliament responsibility for choosing members of the panel, known as the National Council of the Judiciary (KRS). Duda on Tuesday put forward an amendment calling for the appointments of judges to the KRS to require a three-fifths majority in parliament. The condition means they won't be able to push through panel choices on their own.

"This draft bill should stop the Council from being subject to a single party, a single political group," Duda said.

KRS spokesman Waldemar Zurek told the PAP news agency Duda's bill was a "glimmer of hope" but not a satisfactory solution, arguing that judges should only be appointed by other jurists.

Following huge protests over the weekend, thousands of Poles took to the streets again on Tuesday night to voice their opposition to the legislation. Many congregated outside the presidential palace in Warsaw, chanting "free courts, we want a veto."