′Russia is the only conceivable threat to Poland′ | Europe | News and current affairs from around the continent | DW | 10.10.2018

'Russia is the only conceivable threat to Poland'

Former Polish Foreign Minister Radoslaw Sikorski told DW why he sees Russia as a threat to European stability – and why he supports a possible US military presence in Poland.

Radoslaw Sikorski, the former Polish foreign and defense minister, explains in an interview with DW's Zhanna Nemtsova why the current right-conservative Polish government is against the Kremlin and expresses his full support for the deployment of the American military base in Poland, which President Andrzej Duda has already suggested calling Fort Trump.

Zhanna Nemtsova: The current Polish government demonstrates a tough anti-Kremlin line and accuses the previous government for underestimating the risks that could come from Russia.

Radoslaw Sikorski: I worked for a more pragmatic relationship with Russia and we had some successes. We established an area of visa-free travel between the Kaliningrad Oblast [Editor's note: Kaliningrad Region is a Russian federal subject, an exclave bordered by Poland and Lithuania] and the relevant part of Poland. President Putin came to Gdansk for the 70th anniversary of the beginning of the Second World War and he was the first Russian leader to visit Katyn, where the Soviet NKVD murdered in cold blood 20,000 Polish prisoners of war.

We thought that we were establishing a more normal relationship between neighbors. But three things intervened: Russia's invasion of Crimea, the fact that Russia no longer wanted to be on a convergence course with the West (until about 2011-2012 Russia was negotiating a partnership and cooperation agreement with the European Union, such as the one that Ukraine signed) and the tragic accidents of the Polish presidential plane and current Russia's cruel and disrespectful treatment of the wreckage of our Air Force One [Editor's note: The Polish Air Force Tu-154 plane crashed near the Russian city of Smolensk in 2010, killing almost 100 people on board, including Polish president Lech Kaczynski]. 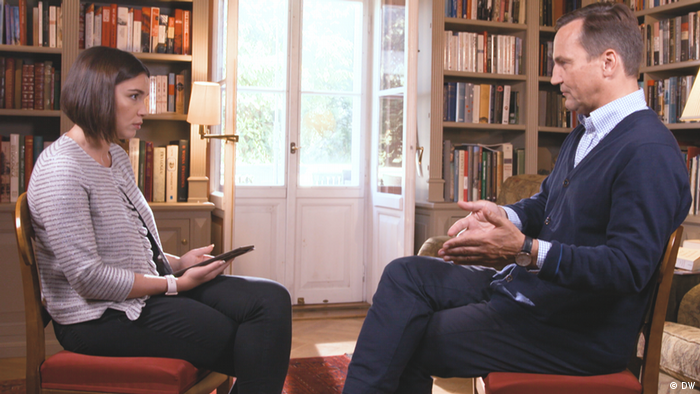 Read more: US-Poland base must be 'cohesive' NATO plan

Could you characterize the current Polish government as really Russophobic?

When Russian generals threaten us with nuclear weapons, what are we supposed to feel? When Russia conducts "Zapad" military exercises in which Poland is the target of a nuclear strike — that's a very good way of maintaining the phobia. What worries me is that we don't seem to have any relations now. You know we talk to each other through the media or shout at each other through a keyhole. And that can be dangerous because it creates room for misunderstandings. But at the same time remember that the current Polish ruling party, ideologically speaking, is indistinguishable from the "United Russia" [Editor's note: Russia's ruling party].

This is a good point that you have just mentioned. If you look at other parties like this across Eastern and Central Europe you would see that populists basically like Putin because they share the same values. But it is not true for Polish populists.

Because there is a fundamental difference: Other right-wing populists in Europe don't have a border with Russia and they were never occupied by Russia. Russia is the only conceivable existential threat to Poland. We don't think it's a current threat, but Russia exercises scenarios and some Russian politicians say things that are very dangerous to us. So yes, many people in Poland fear Russia.

Read more: Is a new US-Poland base realistic?

The Polish minister of defense announced the stationing of a US military base in Poland. He wants to be sure that it just somehow deters Russia from a possible invasion. Do you support it?

What would you say about the possible reaction from Russia if you had a permanent US military base here in Poland?

Russia withdrew from the Conventional [Armed] Forces in Europe Treaty, which limited the presence of conventional troops with the argument that Russia should be able to move its troops around its territory as they please. Well, if you can move as you please, so can NATO.

Donald Trump welcomes Poland's request for permanent US military base

US President Donald Trump has said he is seriously considering establishing a permanent military base in Poland, at Warsaw's request. Such a move would fuel tensions between NATO and Russia. (19.09.2018)