Russia has warned NATO that US President Donald Trump's pledge to send 1,000 US troops to Poland will "destabilize" Europe. NATO forces in member Poland already include a rotating pool of 4,500 US soldiers. 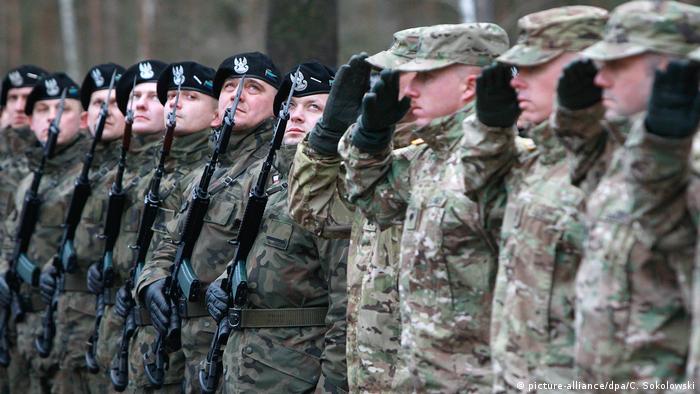 Trump told Duda he would send 1,000 US troops from Germany into Poland, whose leaders have long wanted an installation they have code-named "Fort Trump."

A joint US-Polish declaration said drones of a US Air Force squadron, MQ-9, would also be deployed to Poland.

Poland would provide "jointly determined infrastructure" for the initial package of additional projects "at no cost to the United States," it added in a post relayed by US European Command in Stuttgart.

Russian Deputy Foreign Minister Sergei Ryabkov was quoted by Russian news agencies on Thursday as saying the US move reflected "aggressive" intentions and had a "destabilizing and escalating character."

The Russian Foreign Ministry said the planned US boost to Poland was a betrayal of Russia's deal with NATO reached in 1997 under which the Western alliance would not permanently site significant forces inside the territories of its newer members.

The importance of NATO's headquarters in Poland would increase, the Russian ministry said, adding that Moscow would "take this into account in its own defense planning and its practical actions."

"We see in this signs of preparation for further large-scale deployments," it said, adding: "Such actions undermine one of the few remaining documents designed to ensure military stability in Europe."

Vladimir Shamanov, ex-commander of Russia's special forces and now a Russian lawmaker, said he was concerned that US drones, if deployed in Poland, would be capable of carrying nuclear weapons.

The world was drifting toward a "dangerous moment" akin to the 1962 Cuban Missile Crisis, warned Shamanov.

Reacting to Trump's pledge, NATO Secretary General Jens Stoltenberg tweeted late Wednesday that the troop move showed "the strong commitment of the US to European security & the strength of the transatlantic bond."

The United States currently has some 64,000 troops stationed in Europe, about 33,000 of whom are in Germany under NATO's Status of Force Agreement (SOFA) of 1951 and amended for reunified Germany in 1993.

Duda had accused Russia of "always looking out to take our territory" as he watched an F-35 combat plane fly over the White House, a type Trump said Poland had on order.

"Russia again is showing its unkind, unfriendly imperial face," said Duda — referring to Kaliningrad, a fortified Russian enclave between Poland and Lithuania, and Russia's seizures of territories in Georgia and Ukraine over the past decade.

Trump, Putin differ ahead of G20

Ahead of a G20 summit in Japan due in two weeks' time and to also be attended by Russian President Vladimir Putin, Trump told Duda that he hoped for "great" relationships between Poland and Russia and between the United States and Russia.

Putin, in an interview published earlier on Thursday, said relations between Moscow and Washington were getting worse and worse.