With Trump due to attend the G-7 in France and later visit Poland, many are wondering why a stopover with Angela Merkel in Berlin isn't on the list. Experts say the cold shoulder move is part of a wider strategy. 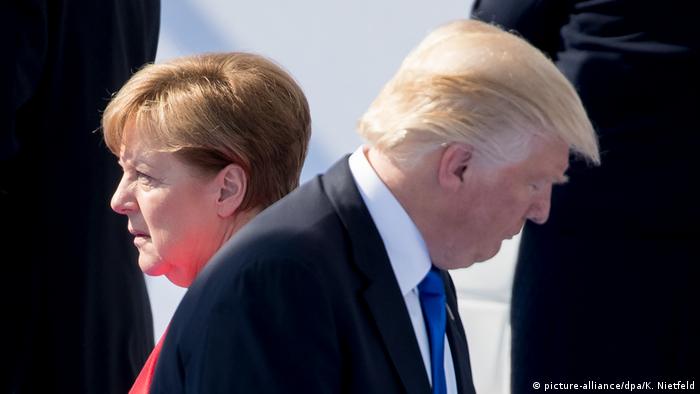 US President Donald Trump is about to return to Europe. He sets off on Friday for the G-7 summit in France and is back again at the end of August for a trip to Poland to commemorate the 80th anniversary of the start of World War II.

Although he'll be right next door, Trump has made no moves to visit  German Chancellor Angela Merkel either on this trip or in the foreseeable future.

In over two years as president, Trump has only met Merkel in Germany once — at the 2017 G-20 summit in Hamburg — and never as her guest in Berlin.

The list is long. From Germany's defense spending, its stance on Iran, its support of the Nord Stream 2 gas pipeline with Russia, and Merkel's resistance to banning China from major infrastructure projects — there are many issues that the two countries don't see eye-to-eye on.

Besides the political tensions, Trump and Merkel aren't known for having particularly good chemistry when they do meet in person. At the D-Day commemorations this summer, Trump did not even offer Merkel a handshake.

The snub to Germany and Trump's cancellation of a planned trip to Denmark in September over their refusal to sell him Greenland are typical of his "transactional leadership style," Josef Braml, a US expert for the German Council on Foreign Relations, told DW.

"He sees himself as a boss, articulates clear goals and demands and rewards or punishes subordinates with advantages or disadvantages if they fail to meet his requirements," Braml said.

"This is why Germany and Denmark are being punished with neglect. Poland, on the other hand, has been able to curry favor with the US president with material concessions for the time being," he added.

Poland has 'more influence' than Germany

While Berlin's sway in Washington has weakened, Warsaw has seen its trans-Atlantic profile significantly boosted since Trump took office.

"Poland has a greater influence than Germany. I would describe Poland as currently the second-most important partner [for the US] after Britain," Nile Gardiner of the Washington-based Heritage Foundation told German public broadcaster ARD.

Braml, who also runs the analysis blog "USA Experte," warned that Poland and others should be wary of their newly strengthened diplomatic ties.

"Trump's current 'friends' in eastern Europe should not be fooled. Sooner or later it will be necessary for US geo-strategists to seek to reconcile interests with Russia in order to curb China's extensive activities," he told DW.

'An attempt to divide the EU'

Treating Europe's economic powerhouse like a flyover country while giving special attention to countries that have clashed with Brussels likely serves a larger strategic purpose — widening divisions within the European Union.

"Trump's travel itinerary in Europe is an obvious attempt to divide the EU. His administration has already made that quite clear. That's what they believe. They are opponents of multilateralism," Jacob Kirkegaard, a senior fellow at the US-based Peterson Institute for International Economics told ARD.

Peter Beyer, the German government's trans-Atlantic coordinator, told the Südwest Presse newspaper that although maintaining good ties with the US remains a high priority, Washington's standpoint on the EU threatens the fragile unity of the bloc.

Trump has repeatedly supported Brexit hard-liner and current British Prime Minister Boris Johnson, while the US ambassador to Germany, Richard Grenell, recently threatened that the US could pull its troops from Germany, moving them instead to Poland.

"His government has tried from the beginning to drive a wedge between EU member states," Beyer said. "We should take that seriously."