Nord Stream 2 builders forge ahead despite renewed US sanctions threat | Business| Economy and finance news from a German perspective | DW | 13.06.2019

Nord Stream 2 builders forge ahead despite renewed US sanctions threat

Despite a new US sanctions threat, companies involved in the Baltic Sea gas pipeline are ploughing ahead with plans to finish the project by the end of the year. But are Trump's latest remarks more serious? 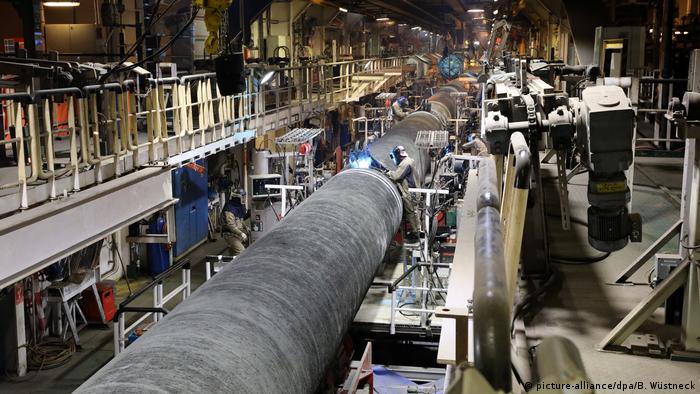 While gas major Gazprom is pushing ahead with the development of its giant Bovanenkovo field on the remote Yamal Peninsula in Russia's Arctic north, US politicians have upped their pressure on European companies and governments involved in the project.

On Wednesday, US President Donald Trump singled out German Chancellor Angela Merkel for his criticism, warning that Germany would become dependent on Russia for the fuel.

"We're protecting Germany from Russia and Russia is getting billions and billions of dollars from Germany. Germany is making a tremendous mistake," Trump told reporters at an appearance with Polish President Andrzej Duda at the White House.

In his attempt to shield Germany from Putin's influence, Trump is even considering to impose sanctions on companies to block Nord Stream 2, the undersea pipeline which is expected to deliver the Russian gas to Germany and other parts of Europe.

Noting that Europeans "have a right to do what they want," Trump added that sanctions were "something that I've been looking at and I've been thinking about."

The cost of building the €9.5-billion (€10.6-billion) energy link is financed in half by Gazprom, with the rest covered by its European partners: Germany's Wintershall and Uniper, Anglo-Dutch Shell, France's Engie and Austria's OMV.

OMV chief executive Rainer Seele told the German business daily Handelsblatt recently that Washington had engaged in a "policy of confrontation rather than cooperation with its allies."

More than a thousand kilometers of pipes have already been laid in the Baltic Sea. Pipelay vessels are working to install eight kilometers (4.97 miles) of pipelines a day. The project had been due to be completed in late 2019, but Gazprom has recently admitted it might not go online before 2020. One reason for the delay is that Denmark has still not issued a permit for the pipeline to cross its waters. 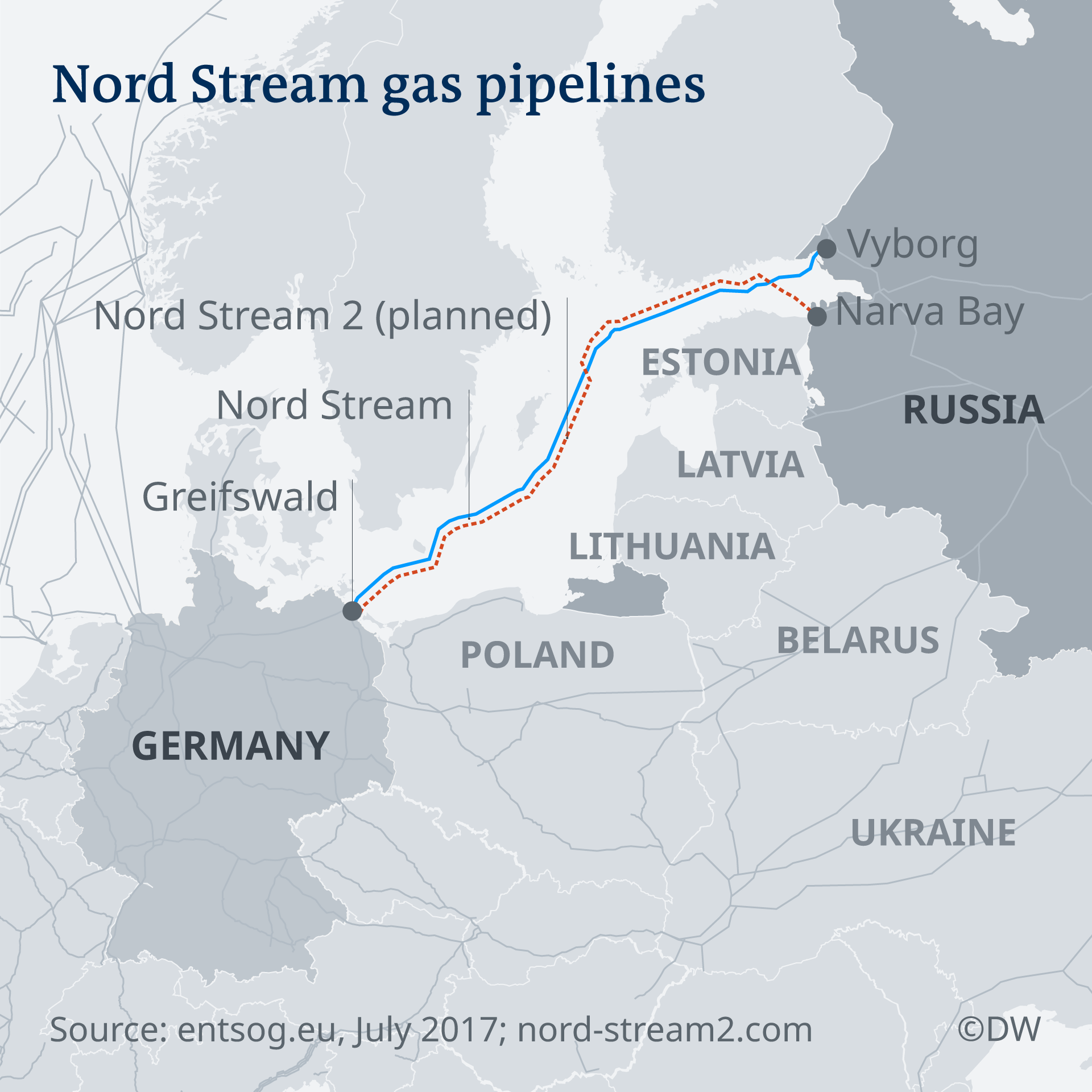 Critics of the project say the pipeline aims to increase Europe's reliance on Russian gas and isolate Ukraine.Washington, Kyiv and some EU countries like Poland argue the pipeline would help Russia bypass infrastructure in Ukraine, allowing Moscow to use energy supplies as a weapon against its neighbors without disrupting flows to Western Europe.

Russia and Germany, however, assert that Nord Stream 2 is a purely commercial project, and the consortium insists that Ukraine will retain its role as a transit country. Henning Kothe, chief projects officer at Nord Stream 2, said the pipeline would help secure Europe's rising gas needs at lower prices.

"The shortest way for gas to reach Europe is via Nord Stream 2, which is 2,000 kilometers shorter than the existing route through Ukraine. That is for me a fact and not politics," he told reporters during a tour of the Bovanenkovo field last month.

Last month, a bipartisan initiative in the US Congress filed a bill that would impose sanctions on vessels used to build Nord Stream 2. Moreover, a 2017 US law called Countering America's Adversaries Through Sanctions ACT (CAATSA) offers the Trump administration the opportunity to impose sanctions against persons and companies investing in Nord Stream 2.

But some experts say the possible sanctions would hardly impact the project, but would put the European Union on a direct collision course with the United States. Elina Ribakova, deputy chief economist at the Washington-based Institute of International Finance, said it was too late to stop the construction so US Congress felt it can only call for sanctions. "It is a highly controversial issue for Germany and therefore particularly risky for US-German relations," she said on Twitter.

Michael Carpenter from the US think tank Penn Biden Center shares this view. He told DW that sanctions would "increase transatlantic tensions," but added: "If the next steps to halt the construction of Nord Stream 2 produce no results, imposing sanctions becomes more realistic." 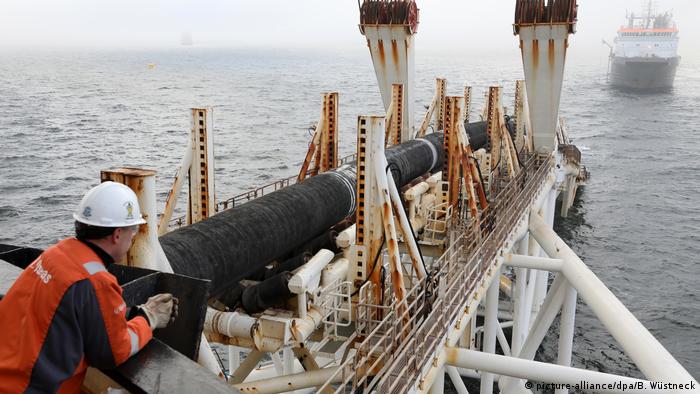 Allseas vessel Audacia is capable of laying pipelines in a depth of about 4 kilometers, a performance no other type of pipelaying vessel can master

According to project managers, some 627 companies are involved in building Nord Stream 2. Among them only two pipelaying specialist firms — Allseas Group from Switzerland and Italy's Saipem.

Michael Harms, managing director of the German Eastern Business Association, says they have unique expertise and would be hardest hit by possible US sanctions. "Any sanctions against these two firms would delay construction massively and could even put the whole project at risk," he told DW.

Mikhail Krutichin, a partner in Russian consultancy RusEnergy, also believes an exit by Allseas would halt construction completely. "There are no replacements [to their pipelayer vessels]," he told DW, because a likely alternative vessel, Russia's MRTS Defender, can only lay pipes in depths of up to 150 meters (164 yards).

Sanctions against the members of the consortium financing Nord Stream 2 would be less harmful, the experts agree. That is because the Russian state, or even Gazprom itself, had sufficient funds to continue building.

Nevertheless, pushing back the pipeline's launch date could create considerable difficulties. Currently, most of Russia's gas destined for Europe passes through Ukraine. But the transit agreement between Kyiv and Moscow expires at the end of the year, and the two governments —at loggerheads over Crimea and the Ukraine conflict — are struggling to agree on the deal's extension.

Gazprom already said ending the year without completing Nord Stream 2 and without a transit deal would be a "nightmare scenario" that could come at a heavy cost for the gas company.