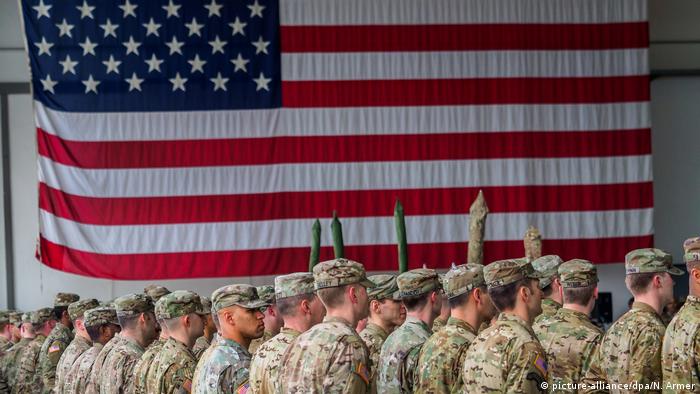 The Federal Republic of Germany has been a vital part of United States defense strategy in Europe ever since the end of World War II, when US forces were part of a 10-year Allied occupation of the country. Though troop numbers have fallen drastically since those days, the US military still maintains a major presence and over the intervening decades, US military communities have formed around a handful of German towns.

Read more: US to withdraw more troops from Germany than previously thought

Germany's strategic importance for the US is reflected by the location of US European Command (EUCOM) headquarters in the southwestern city of Stuttgart, from which it serves as the coordinating structure for all American military forces across 51 primarily European countries.

The mission of EUCOM is to protect and defend the US by deterring conflict, supporting partnerships such as NATO and countering transnational threats. At its command are the US Army Europe, the US Air Forces in Europe, and the US Marine Corps Forces Europe and Africa, all of which have installations in Germany.

In fact, Germany hosts the largest portion of US troops in Europe — roughly 38,600, though the numbers vary as troops are regularly rotated to other countries. This is also more military personnel than the US keeps in any other country except Japan.

However, the numbers have fallen in recent years. German government figures show that between 2006 and 2018, the number of US troops stationed in Germany more than halved, from 72,400 to 33,250, as the US military responded to a shifting and increasingly complex global security situation.

Germany is home to five of the seven US Army garrisons in Europe (the other two are in Belgium and Italy), and the US Army Europe is headquartered at the garrison in Wiesbaden, a city close to Frankfurt in central western Germany.

Figures provided to DW by the US military show that these five garrisons, each consisting of various installations at different locations, currently comprise around 29,000 military personnel. This number includes the US Marine Corps Forces of Europe and Africa, which are headquartered in Böblingen, southwestern Germany, as part of the US Army Garrison Stuttgart.

In addition, roughly 9,600 US Air Force personnel are spread across various locations in Germany, including the two US Air Force bases of Ramstein and Spangdahlem.

US military in Germany: More than troops

Because US military installations also employ American civilians, and servicemen and women can sometimes bring their families with them overseas, sizable civilian communities can form around bases. In fact, some US bases in Germany, such as the one near Ramstein, are small towns in themselves. They include not only barracks, airfields, exercise terrain and material depots, but also their own American shopping malls, schools, postal services and police force. Sometimes the only legal tender is the US dollar.

Meanwhile, the US Army Bavaria Garrison, headquartered at Grafenwöhr, near Bavaria's border with the Czech Republic, is the largest overseas US Army base in the world, both in population and acreage, covering over 97,000 acres (390 square kilometers).

Bases also often employ significant numbers of local nationals and serve as an economic boost for the surrounding German communities, whose businesses provide goods and services. Past installation closures, such as the army garrison at Bamberg in 2014, took a toll on the local economy, and many Germans living near active US military installations have expressed opposition to potential troop reductions. 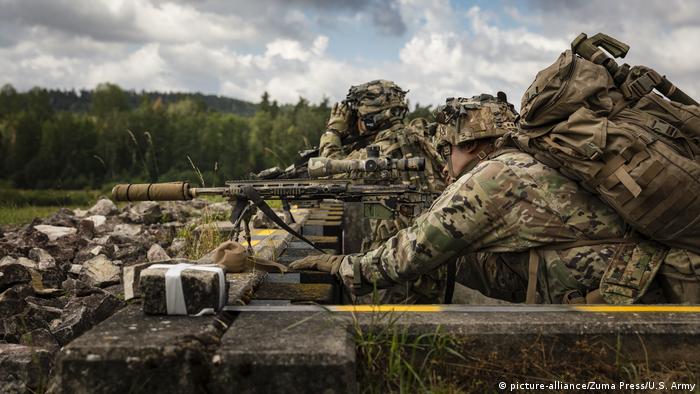 But the extent of US military presence in Germany is not limited to personnel: The US also keeps planes at other non-US air force bases in Germany. Additionally, thanks to NATO's nuclear sharing arrangement, an estimated 20 nuclear weapons are believed to be kept at Germany's Büchel Air Base in western Germany — something which has attracted much criticism from Germans.

Another contentious arrangement is the fact that the Ramstein Air Base is used as a control center for drone strikes in Yemen and elsewhere.

Allied postwar occupation and its legacy

The US military presence in Germany is a legacy of the post-WWII Allied occupation, which lasted from 1945 to 1955. During this time, millions of US, British, French and Soviet troops were stationed in Germany.

The northeastern part of the country, which officially became East Germany in October 1949, fell under Soviet control.

In West Germany, the occupation was regulated by the Occupation Statute, signed in April 1949, when the country was founded. The statute allowed France, the UK and the US to keep occupational forces in the country and maintain complete control over West Germany's disarmament and demilitarization.

When the military occupation of West Germany officially ended, the country regained control of its own defense policy. However, the Occupation Statute was succeeded by another agreement with its NATO partners. This deal, known as the Convention on the Presence of Foreign Forces in the Federal Republic of Germany, was signed in 1954 by West Germany. It allowed eight NATO members, including the US, to have a permanent military presence in Germany. The treaty still regulates the terms and conditions of the NATO troops stationed in Germany today.

The number of US military personnel has been declining ever since the end of the Cold War in 1990, when, according to the German government, there were an estimated 400,000 foreign troops stationed on German soil. Roughly half of these were US military personnel, but they were gradually withdrawn as tensions with what was left of the Soviet Union eased, and conflicts elsewhere, such as the first Gulf War in Iraq, drew more US military away.

US President Donald Trump has announced a reduction in American troops stationed in Germany. He faulted Berlin for failing to meet its NATO spending obligations and accused it of treating the US "unfairly" on trade. (16.06.2020)

US transferring 1,500 soldiers to Germany

Despite repeated bluster from US President Donald Trump about NATO, the US will increase its presence in Germany. Germany has welcomed the move as a commitment to the defense of Europe. (07.09.2018)

Foreign Minister Heiko Maas said Germany will not be taking part in a US-led mission to secure oil tanker ships sailing near Iran. The US ambassador in Berlin slammed the decision, saying Germany has responsibilities. (31.07.2019)

The US Army is undertaking one of its biggest troop movements in Germany since the end of the Cold War, as part of a NATO operation. Not everyone in eastern Germany is happy to see US military hardware rumbling past. (30.05.2018)

US Department of Defense Base Structure Report - Fiscal Year 2015 Baseline

US President Joe Biden promised this week to send more US troops to bolster NATO's allies in Central and Eastern Europe. The West believes that Russia is preparing to invade Ukraine.

Heiko Maas and his US counterpart Antony Blinken have discussed "a joint approach" toward the Taliban at the Ramstein US military base in Germany, after the Islamist militants named a new Afghan government.