Heiko Maas in Tehran: Why Germany can't concede too much to Iran

German Foreign Minister Heiko Maas has held talks with his Iranian counterpart, Javad Zarif, in Tehran, in a bid to ease tensions in the Persian Gulf. But experts say the visit is unlikely to produce any breakthrough. 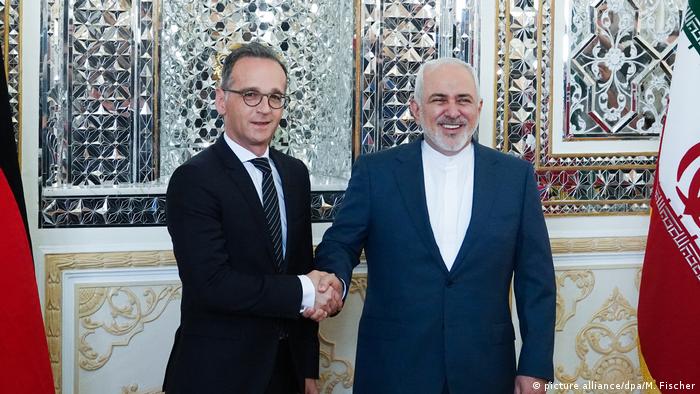 Iranian Foreign Minister Javad Zarif said on Monday that he and his German counterpart, Heiko Maas, held "frank and serious" talks on his country's nuclear deal with world powers, adding that "Tehran will cooperate with EU signatories of the deal to save it."

Last year, US President Donald Trump pulled his country out of the 2015 Iran nuclear agreement, officially called the Joint Comprehensive Plan of Action (JCPOA), labeling it a "terrible deal" that does not do enough to curtail Iranian nuclear development.

After the US reimposed sanctions on Iran, the government in Tehran threatened to pull out of the nuclear deal unless other signatories could offer help to stem the effect of US sanctions. In May, Tehran said it would begin enriching uranium closer to weapons-grade levels if Europe didn't come up with new terms for the deal by July 7.

Against this backdrop, the German foreign minister is trying to salvage the agreement that curtailed Iran's nuclear program in exchange for the lifting of international sanctions. Maas' four-day Middle East trip, which also saw him visiting Jordan, Iraq and the United Arab Emirates, is being seen as a major diplomatic undertaking by Germany to scale down tensions and possibly avert a military confrontation in the Middle East.

In Tehran, Maas reemphasized the importance of the nuclear deal, saying it is "extraordinarily important" for Europe's security. He also said that Germany and its European partners "have made the greatest effort to meet (their) commitments.

But Iran thinks otherwise. "So far, we have not seen practical and tangible steps from the Europeans to guarantee Iran's interests ... Tehran will not discuss any issue beyond the nuclear deal," said Iranian foreign ministry spokesman Abbas Mousavi.

"What we expect from the European Union is that they act on their commitments," he added.

Tensions between Washington and Tehran are no longer restricted to the Iran nuclear deal. They have escalated significantly over the past month, with the US accusing Iran of continued malign activity and unspecified threats against the United States and its allies. Washington has also increased its military presence in the region, most recently by deploying an aircraft carrier group, missiles and a B-52 bomber squadron.

"From Iran's point of view, Tehran would lose all leverage against the US if it gave up Yemen and Syria, and renounced its missile program," Mehdi Mahdavi Azad, an Iranian journalist and political analyst, told DW. Maas views them as "small compromises," but for Tehran, they're "real trump cards" against Washington, the expert said. Balancing this divergence in expectations is the "core challenge" for Maas, he noted. "That's why it's clear from the very beginning of his trip that the German foreign minister would be confronted with ifs and buts."

Maas now has a difficult task at hand. While Iranian authorities want to restrict the talks to only the nuclear deal, the Islamic country's weapons development program and its alleged support to Shiite groups across the Middle East remain a cause of concern in not only Washington but also European capitals.

On Sunday, Maas called Iran's ballistic missile program "problematic" during a visit to the United Arab Emirates. The remarks didn't go down well in Tehran, with foreign ministry spokesman Mousavi saying that "European officials are not in a position to comment on Iran's issues beyond the nuclear deal."

Iranian officials have also accused the Europeans of lacking a consensus on their dealings with Tehran.

German-Iranian relations haven't been in a good shape over the past several months, Mehdi Mahdavi Azad said. "Germany is unhappy about Iran's missile activities and Tehran's role in Yemen and Syria. Iran, meanwhile, is unhappy with Germany's inability to help it circumvent US sanctions." Other sources of German-Iranian tension involve Iran's alleged terrorist activities in Europe and Tehran's reluctance to enforce international guidelines against money laundering and financial support for terrorist groups, the expert pointed out.

The German foreign minister partly acknowledged the EU's limitations, saying in Tehran that it would be difficult for the Europeans to help Iran economically "without the Americans."

"But I think there are also political and strategic interests in maintaining this agreement and thus the dialogue with Europe. That must also be recognized in Tehran," Maas said.

Germany's main interest is to deescalate tensions in the Persian Gulf, as it is aware that without bringing all players to the negotiating table on the nuclear deal, the risk of a US-Iran military confrontation could rise.

Zarif has also warned the US that it "cannot expect to stay safe" after launching an "economic war" against Tehran. "The only solution for reducing tensions in this region is stopping that economic war," he said during a press conference with Maas on Monday.

"The German government has so far witnessed the intensification of tensions between the US and Iran from the sidelines. But Berlin has now understood that the tensions could escalate into a full-blown confrontation," Mehran Barati, a Berlin-based expert on Iranian affairs, told DW. "Maas' trip is an attempt by Germany to mediate between the US and Iran so that there's no military confrontation in the Persian Gulf."

Paulo Casaca, a Portuguese member of the European Parliament from 1999 to 2009 and an Iran expert, told DW that the chances of success for Germany's diplomatic intervention in the Iran crisis are very limited.

"I think Germany is not so much trying to 'save' the Iran nuclear deal but rather looking for a new arrangement," Casaca, who is also the founder and executive director of the Brussels-based South Asia Democratic Forum (SADF), told DW.

"It remains to be seen whether a possible new deal would amount to appeasing Tehran or forcing it to come to the negotiating table," he added.

"The Trump administration offered talks without preconditions to Tehran, but Iranian authorities have declined them. The Iranian regime expects more appeasement from the international community, particularly from the Europeans, to influence the US public opinion," the expert underlined.

This raises an important question: Will Germany's peace efforts inadvertently strengthen the Iranian regime? Casaca is critical of German diplomacy, as he believes it borders on Iran appeasement. "Germany has consistently been the strongest Western appeaser. There is no sign of any change in policy," he alleged.

"International appeasement of the Iranian theocracy allowed it to suppress its people and destabilize the Middle East. The nuclear threat is more real than ever. I believe that President Trump's Iran policy is the only realistic hope to control this situation."

Meanwhile, the International Atomic Energy Agency (IAEA) said on Monday that Iran has accelerated its production of enriched uranium.

"I... hope that ways can be found to reduce current tensions through dialogue," IAEA chief Yukiya Amano said in a speech opening the agency's quarterly board of governors meeting.

"As I have constantly emphasized, the nuclear-related commitments entered into by Iran under the JCPOA represent a significant gain for nuclear verification," Amano said.

"It is essential that Iran fully implements its nuclear-related commitments under the JCPOA," he added.

The latest developments pose a big challenge to Germany, which wants to mitigate the situation.

Ali Vaez, director of the Iran project at the International Crisis Group think tank, told DW in an interview last month that Tehran could use the nuclear enrichment as a bargaining chip with the West.

"Iran is likely to partially cease its commitments under the nuclear deal as a last-ditch effort to get an economic lifeline from the remaining signatories to the deal. At the same time, a military confrontation with the US would be a godsend to Iran's hard-liners. They would try to use it to further militarize the domestic sphere and appropriate all levers of power," the expert added.

DW Farsi contributed to this report.