The top German diplomat has made a surprise trip to Iraq to discuss regional security matters as he attempts to salvage the Iran nuclear deal. His trip comes amid increased tensions between Washington and Tehran. 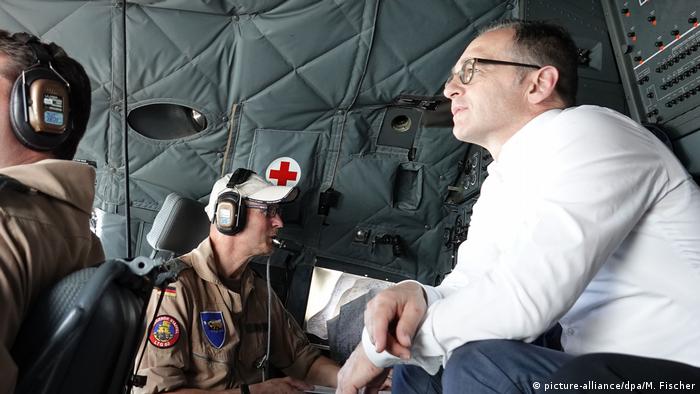 German Foreign Minister Heiko Maas arrived Saturday in Iraq to hold talks with Prime Minister Adel Abdel Mahdi and President Barham Salih over the increasing tensions between Iran and the US. Maas' Iraq trip was unannounced due to security reasons.

"There is a clear danger of miscalculations, misunderstandings, provocations leading to unforeseeable consequences in this highly tense region," Maas said as he arrived in Baghdad.

"The latest escalation requires us as European neighbors to intervene in favor of de-escalation and peaceful coexistence," he added. "We cannot just seek dialogue, we must lead it, precisely where the differences seem insurmountable and long-simmering conflicts run deep.

"We Europeans are convinced that it is worth every effort to work toward upholding the Vienna nuclear agreement with Iran."

On Friday, Maas was in Jordan for the first stop of his high-profile four-day Middle East tour.

He landed at Al-Asrak air base, where German troops center their operations against the "Islamic State" (IS) militant group. On Friday, Der Spiegel newsmagazine reported that the US had asked the German military to extend its aerial reconnaissance and tank missions in Syria to help US troops fighting against the remnants of the "Islamic State" terrorist group.

Reacting on Saturday, Maas called the German mission "absolutely essential at the moment to prevent IS from building new underground structures and enabling it to continue to operate.

The focus of Maas' Middle East trip will be his talks with Iranian officials in Tehran on Monday. After the US reimposed sanctions on Iran, the government in Tehran threatened to pull out of part of the Iran nuclear deal unless other signatories could offer help to stem the effect of US sanctions.

Washington has increasingly burdened Iran with sanctions in an effort to force Tehran to accept stricter controls on its nuclear program. US President Donald Trump has consistently called the JCPOA a terrible deal, saying it does not do enough to curtail Iranian nuclear development.

Iranian officials said Friday they were prepared to talk to Maas solely about the nuclear deal.

"To address topics beyond the nuclear agreement is irrelevant and will also not help the deal," said an Iranian Foreign Ministry spokesman.

Maria Adebahr, a spokesperson for the German Foreign Ministry, said Berlin wanted to "preserve the nuclear agreement because we believe it is a good agreement that prevents Iran from acquiring nuclear weapons."

Read more: US pressures Europe on Iran at summit in Poland

Tensions between Washington and Tehran are no longer restricted to the Iran nuclear deal. They have escalated significantly over the past month, with the US accusing Iran of continued malign activity and unspecified threats against the United States and its allies. Washington has also increased its military presence in the region, most recently by deploying an aircraft carrier group, missiles and a B-52 bomber squadron.

Maas' Iran trip is being seen as a major diplomatic undertaking by Germany to scale down tensions and possibly avert a military confrontation in the Middle East.

The German foreign minister reportedly coordinated his trip with the UK and France and informed US Secretary of State Mike Pompeo of the trip when the US diplomat was in Berlin last week. A top adviser, Jens Plötner, traveled from Berlin to Tehran two weeks ago to lay the groundwork for Monday's meeting, provoking US irritation.

German Green Party lawmaker Omid Nouripour told DW it was "praiseworthy" that Maas had sought consultations with the UK and France. "He needs to reaffirm the twin message that we are prepared to invest more in saving the nuclear deal, as it is in our security interests to not have a nuclearized Middle East," the foreign policy expert added.

Maas will also try to convince Tehran that a dialogue with the US is the "only way to avoid military conflict," Nouripour said.

Last week, Pompeo said Washington was willing to hold talks with Iran to lower tensions in the Persian Gulf "with no preconditions." Responding to Pompeo's remarks, Iranian President Hassan Rouhani said the US needed to return to the negotiating table and stick to the 2015 nuclear deal.

Envoy Jens Plötner had been involved in drawing up the 2015 JCPOA treaty and went to Tehran with the aim of seeing it preserved. He was told that Iran's patience was over. (23.05.2019)

Speaking on the 30th anniversary of the death of Grand Ayatollah Khomeini, Ayatollah Ali Khamenei has said "resistance has a cost, but the cost of surrendering to the enemy is higher." He also criticized Saudi Arabia. (04.06.2019)

The Organization of Islamic Cooperation has indirectly condemned Washington for recognizing Jerusalem as Israel's capital. But the 57-nation bloc backed US-ally Saudi Arabia over an ongoing conflict with Iran. (01.06.2019)