Interceptions cut off another source of North Korean fuel | Asia | An in-depth look at news from across the continent | DW | 02.01.2018

Interceptions cut off another source of North Korean fuel

As international sanctions increasingly bite, what course will North Korean leader Kim Jong Un take if he senses his isolated regime in Pyongyang is grinding to a terminal halt? Julian Ryall reports. 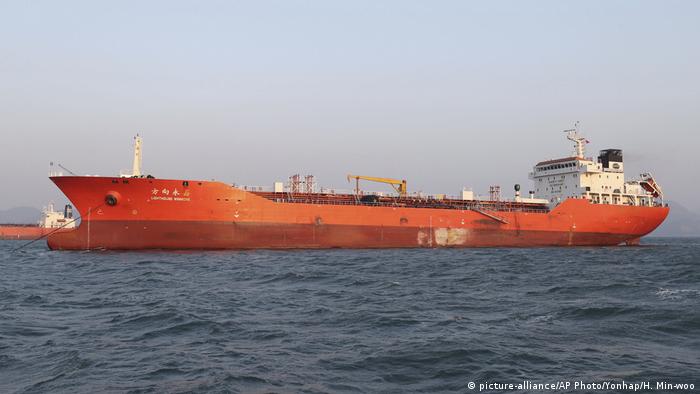 The seizure of two foreign ships suspected of providing oil to North Korea, in violation of United Nations sanctions, suggests that global restrictions on Pyongyang's trade are having an impact.

The impounding of the Hong Kong-flagged tanker Lighthouse Winmore in November and the Panamanian registered Koti in December have highlighted the lengths to which North Korea has been willing to go to in order to obtain fuel.

Similarly, satellite images of Chinese and Russian vessels trans-shipping fuel to North Korean ships in international waters will have further off tipped authorities about sanctions-busting maneuvers and will effectively close a loophole that the regime had been exploiting.

Analysts worry, however, about Pyongyang's reaction when its fuel reserves fall to levels at which its industry and — more importantly — its military are no longer able to function. That situation, they say, is likely to be considered an existential threat to the nation and it is not clear how Kim Jong Un will react if he fears his regime is about to grind to a terminal halt.

"I think it is very likely that the Russian and Chinese authorities did not know about their ships delivering fuel to North Korean tankers and that it was just a case of a lucrative opportunity for someone," said Garren Mulloy, a defense expert and an associate professor of international relations at Japan's Daito Bunka University.

"Beijing and Moscow have probably quietly told the people behind these deals to stop, but I would think that they were only providing a fraction of what the North actually needs since the UN's latest sanctions," he told DW.

Under its most recent resolution, imposed by the UN in early December, North Korea is only permitted to import 500,000 barrels of refined petroleum a year, a reduction of 86 percent of its previous imports.

The international community has stated that it hopes that measure will be sufficient to convince Kim to halt his belligerence and the development of nuclear warheads and long-range ballistic missiles.

That aim has not yet come to fruition, however, with the North Korean dictator using his New Year's speech to defiantly declare that he has no intention of scaling back the production and deployment of his weapons.

"We should always keep readiness to take immediate nuclear counterattacks against the enemy's scheme for a nuclear war," Kim said. "The US should be aware that the North's nuclear force is reality, not a threat." He added that a "nuclear button" is constantly on his desk.

"I have seen various reports that suggest that the North has as little as four weeks' supply of oil and others that suggest they have stockpiles lasting a year or more," Mulloy said.

Backed into a corner

"But my sense is that the international community is backing his very volatile and well-armed regime into a corner, very much in the same way that Imperial Japan was backed into a corner by an oil embargo imposed by the US in 1941," he said.

The result of that policy, he points out, was that Japan opted to go to war with all those it perceived as limiting its imperial ambitions and the globalization of a conflict that caused millions of deaths.

"And even if North Korea only has four weeks of fuel for its military, it can do a lot of damage in that time if that is the road that Kim wants to take," Mulloy said. "It is very possible that he will gamble that the rest of the world will sue for peace if he goes on the offensive and has nuclear weapons to back him up because the alternative is just too unpleasant to think about."

Ahn Yin-hay, a professor of international relations at Korea University in Seoul, says the Pyongyang regime will care little for the well-being of its people and is therefore able to withstand sanctions longer than many anticipate.

"Senior officials and the military will be fine for a while yet, but the ordinary people — and especially the old, women and children — are probably already suffering," she said. "In the 1990s, when they called the mass starvation that claimed more than 1 million lives the 'arduous march,' the regime made sure it survived comfortably."

And she played down suggestions that shortages of fuel and food might encourage ordinary people to rise up against their oppressors.

"The system there is incredibly durable, the people are constantly faced with propaganda and that is being stepped up to portray the outside world as a threat to them personally," she said. "They may be suffering, but I do not think that a coup can happen in this situation."

Mulloy believes that more moves will be made to interdict foreign vessels that are attempting to break international sanctions, with the South Korean Coast Guard — aided by US satellite and monitoring capabilities — likely to be active in seeking out ships that it believes are attempting to feed the North Korean regime.

And he does not believe that Beijing or Moscow would object if their ships are named and shamed for taking part in contravening the sanctions. Neither government, he believes, would want to be seen to be condoning anything that breaks the UN embargo.

Yet China, in particular, does not want the sanctions to trigger the implosion of Kim's regime, he adds.

"They want to keep the North Koreans going because they really do not want the collapse of a volatile regime on their border, to have all that uncertainty made worse by nuclear weapons and potentially millions of refugees," Mulloy pointed out.

And that concern is likely to be sufficient for China to keep sufficient fuel flowing across the border, in pipelines and train bowsers, to prop Kim up for a little longer.

Halting exports of fuel to North Korea could bring the nation to a halt within months, but can China and Russia be trusted to fully implement sanctions? And how would Pyongyang react? Julian Ryall reports from Tokyo. (04.09.2017)

South Korean officials say they are probing a second ship thought to be violating UN sanctions by taking oil to the North. Germany has warned that the world must act to stop the communist state's nuclear weapons program. (31.12.2017)