It has been one year since German Chancellor Angela Merkel's coalition government set out to make a policy push toward a more united Europe. So what has Berlin actually achieved over the past 12 months? 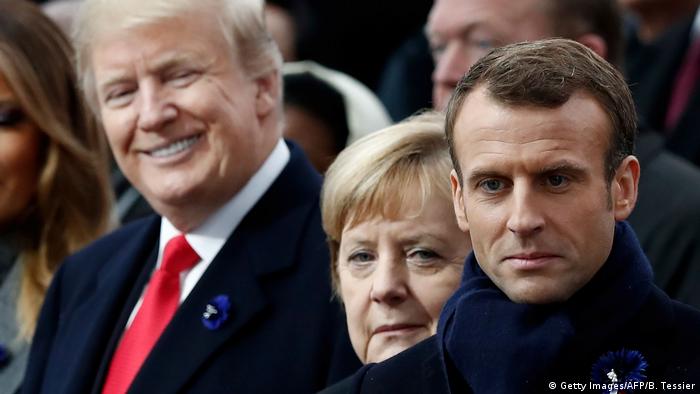 "A new dawn for Europe" — Germany's pledge toward the EU is enshrined in the title of the coalition agreement between Chancellor Angela Merkel's Christian Democrats (CDU), their Bavarian sister party the Christian Social Union (CSU) and their junior partner, the Social Democrats (SPD). Indeed, the EU outlook forms the very basis for the coalition government that Merkel has led over the past 12 months.

Brexit and growing populism across Europe threaten the bloc's stability and momentum, but Berlin is also reluctant to embrace  EU enthusiasm a la Emmanuel Macron. The French president has persistently prompted Germany to help build Europe into a strong protecting power, and proposed concrete measures. But Merkel has remained elusive on many demands, preferring symbolism instead, like renewing German-French friendship vows in the Treaty of Aachen.

Instead she let her successor as CDU party leader — and potentially as chancellor — Annegret Kramp-Karrenbauer, reject many of Macron's key ideas for Europe, many of which point toward a common welfare system. While Kramp-Karrenbauer backs a joint EU migration policy and more defense cooperation, she said "European centralism, European statism, the communitarisation of debts, the Europeanization of welfare systems, and the minimum wage would be the wrong approach" in her point-blank refusal to simply sign up to Macron's vision.

She even went as far as questioning the second base of the EU Parliament in the French city of Strasbourg and calling for an EU seat in the UN Security Council. Both would be large concessions for France. Diverging weapons export policies also remain in the way of closer military cooperation, something for which both countries have signed up.

Problems in the East

The Visegrad states of Poland, the Czech Republic, Slovakia and Hungary continue to resist Berlin's drive toward an EU asylum policy that would include the EU-wide distribution of migrants. The authoritarian tendencies of the Polish and Hungarian governments are straining relations with Berlin.

Germany is no longer calling for EU payments to be dependent on cooperation on migration and EU values. It appears the government wants to avoid any move that could buoy populist sentiments ahead of EU elections in May.

Germany's relations with Russia remain under strain. Berlin is walking a fine line in trying to maintain good relations with Moscow, despite its annexation of Crimea and its apparent arms buildup. The German government wants to be able to continue its role as mediator in the Ukraine conflict. But there are also business interests at play, with Germany pushing ahead with the joint Nord Stream 2 gas pipeline despite criticism from EU partners, most notably Poland.

Washington and the EU Commission in Brussels have managed to force significant changes to the project. The fact that France's opposition made that interference possible in the first place is a bitter pill to swallow for Berlin.

Tackling the root causes of migration increasingly dominates Germany's relations toward African countries. It was not until the migration crisis of the past few years that the chancellor framed Africa as a strategically important partner.

Most recently, she traveled to Senegal, Ghana and Nigeria as well as Algeria and Morocco. There, she defended the UN Compact on Migration as a "clear commitment to multilateralism and stressed that legal migration also creates prosperity."

Huge investments in development programs have been made to propel growth and facilitate investment by German companies. Moreover, German troops on the ground in Mali are the most tangible sign of Germany's growing security interests in the region. Yet Merkel told this year's Munich Security Conference "all of that won't make a difference if these countries don't have an economic perspective."

The conservative-led coalition has reaffirmed its commitment to relations with the United States. However, Berlin is decidedly sober about working with the administration of US President Donald Trump. Washington's cancellation of the Iran nuclear deal was heard in Brussels and Berlin as a wake-up call to develop both national and European political and military capabilities.

A trans-Atlantic trade war is off the table for now, but still regarded as a possibility in the future. Merkel has responded to Trump's "America First" doctrine by calling for increased multilateralism. At this year's World Economic Forum, she pledged that one "must also think of others' interests to create 'win-win' situations."

German policy in Asia remains dominated by China; the coalition agreement identifies not just "opportunities" but also "risks" in relation to this strategically important partner. Berlin and Brussels are carefully monitoring China's Belt and Road strategic investment initiative and have pushed for equal access to markets and investment opportunities where China keeps pushing back.

In addition to human rights, the question of whether Chinese technology is strategically safe enough for Western infrastructure has become a delicate issue. The question of whether Chinese communications giant Huawei should be allowed to compete for providing Germany's 5G mobile network infrastructure is expected to have an impact on bilateral relations.

The "value partnership" Germany has with Japan, however, could not be more different. The German chancellor traveled to Japan in early February to mark the free trade agreement between the EU and Japan coming into force. Merkel described the EU-Japan Economic Partnership Agreement as "a new opportunity in all directions" and hopes it will help demonstrate the benefits of multilateral agreements.