Annegret Kramp-Karrenbauer has presented her own proposals to deal with populism, economic uncertainty, international security and migration. "Europe must become stronger," she wrote in response to the French president. 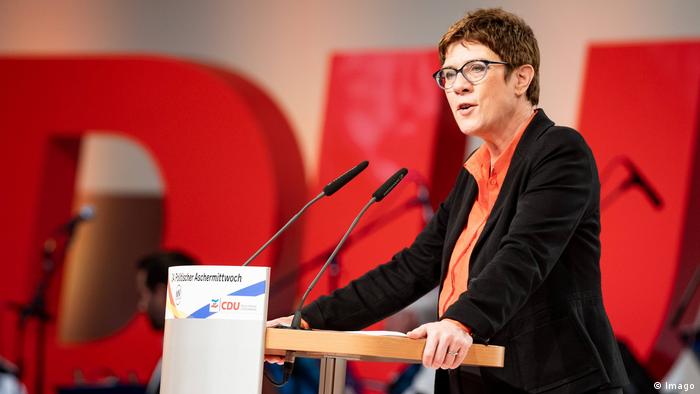 In an op-ed published in the Welt am Sonntag newspaper, Chancellor Angela Merkel's successor as head of the Christian Democratic Union (CDU) contrasted a "European way of life" with social and political models in China, the US and Russia. "Europe must become stronger," she wrote.

While Annegret Kramp-Karrenbauer echoed some of the plans set out by French President Emmanuel Macron on Monday, there were some issues on which she took a different stance.

Kramp-Karrenbauer was specific in terms of what she did not want: "European centralism, European statism, the communitization of sovereign debt, a Europeanization of social systems and of the minimum wage would be the wrong way."

As she responded in detail to the letter published by Macron, Kramp-Karrenbauer, or AKK as she is popularly known, focused on a number of proposals:

Kramp-Karrenbauer suggested that when migrants first enter the EU, controls should be made to determine if there was an "asylum claim, a refugee status or any other reason for travel to Europe." She proposed "an electronic entry and exit register" and the "expansion of the Schengen Information System" to include all national and European authorities.

Kramp-Karrenbauer said each EU member state should play its part in dealing with the causes of migration, border management and refugee reception. But she also suggested a sliding scale of responsibilities for each state: "The more it does in one area, the less should be its contribution in other fields."

She also called for amendments to existing EU treaties with discussions involving all member states, and not just the "Brussels elite." Macron had suggested a "European conference" to propose changes for the EU's political project, including a revision of the treaties.

The CDU leader also said EU officials should no longer be exempt from national income taxes.

The German government says it supports a call by the French president for reforming and bolstering the European Union. But some say Berlin itself needs to show more initiative. (05.03.2019)

The CDU leader mocked the idea of gender-neutral bathrooms during a Carnival-themed program on public broadcaster SWR. Politicians and activists called the incident a "travesty." (03.03.2019)