The CDU leader mocked the idea of gender-neutral bathrooms during a Carnival-themed program on public broadcaster SWR. Politicians and activists called the incident a "travesty." 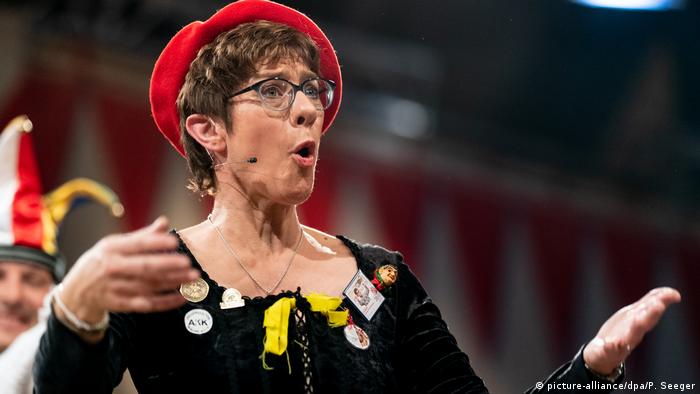 Annegret Kramp-Karrenbauer, German Chancellor Angela Merkel's hand-picked successor as leader of the Christian Democrats (CDU), came under fire on Sunday as a video of her making jokes at the expense of minorities began to do the rounds on social media.

Kramp-Karrenbauer appeared on a live broadcast of a Carnival celebration on Thursday, dressed in festive clothing and charged with entertaining the audience in the southern state of Baden-Württemberg.

Making fun of Berlin's reputation as a hip and progressive haven, she referred to the "latte macchiato party" that has "installed third-gender bathrooms," in hipster cafes. Mocking the idea of neutral bathrooms that are made with a mind to making gender non-confirming and transgender individuals more comfortable, the conservative leader joked: "It's for the men who can't decide if they want to sit or stand when they pee."

The comment was immediately slammed by LGBT activists across Germany, noting that Kramp-Karrenbauer was already crowned "Miss Homophobia 2018", an annual distinction bestowed by the equal rights NGO Enough is Enough.

The CDU chief was given the title after making statements against gay marriage, and comparing marriage equality to incest and polygamy.

Dietmar Bartsch, leader of the opposition Left party, wrote on Twitter that this was "another reason to fight against this woman becoming chancellor," and Berlin's Deputy Mayor Klaus Lederer called the footage a "travesty."

"The chairperson of the largest party in the Bundestag finds it funny to condemn groups of people," using Carnival festivities as an excuse, he added.

Kramp-Karrenbauer was also criticized by the business-friendly and sometime-coalition partner of the CDU, the Free Democrats (FDP). Bundestag lawmaker Jens Brandenburg called the incident "embarrassing" and added: "Is it so difficult to make a humorous joke without attacking minorities?"

The Christian Democrats have chosen Annegret Kramp-Karrenbauer to lead the CDU into its next phase. DW traces the unlikely rise of a conservative with a very long name from one of the most provincial parts of Germany. (07.12.2018)

The moderate pragmatist with the double-barreled name beat out Merkel critic Friedrich Merz in a second-round runoff to take over from the chancellor as party leader. For Merkel herself, it was a late-career victory. (07.12.2018)

The most prominent inner-party critic of former Chancellor Angela Merkel has vowed to unite the Christian Democratic Union. The 67-year-old staunch conservative is now reaching out to women and young voters.