German Chancellor Angela Merkel's Christian Democrats have met in an effort to shore up their credentials on immigration. The party, which now has a new leader, has seen support hemorrhage since the 2015 refugee crisis. 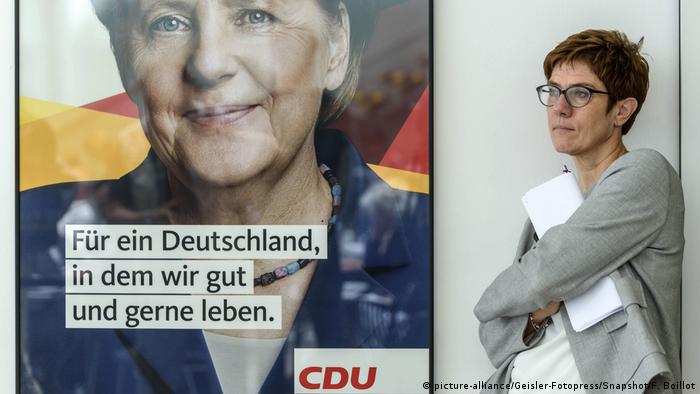 Christian Democrat (CDU) leader Annegret Kramp-Karrenbauer said the party had to prevent any repeat of the 2015 refugee crisis, which saw hundreds of thousands of migrants and refugees arrive in Germany.

"We must do everything we can to prevent this from happening again," the CDU leader said. "We have learned our lesson."

Kramp-Karrenbauer took over the conservative CDU leadership from Chancellor Angela Merkel in December.

She called for "comprehensive and conclusive monitoring of migration" to provide an "early warning system" in the event of any future refugee crisis.

The comments came as the party conducted a series of Monday workshops with migration, integration and security experts.

Kramp-Karrenbauer praised Germany's "very individual right of asylum," saying it was "one of the highest assets that we have." The right to asylum is anchored in Germany's national constitution, because of the displaced populations returning to postwar Germany after World War II.

However, she added that those who abused the system and committed criminal acts should be given a "clear signal."

"We are a state with the rule of law that will not allow itself to be exploited."

Germany's big two seek to win back base

Both the CDU and their coalition partners, the center-left Social Democrats (SPD), have been trying to counter a loss of support among their core voters in recent years.

In the case of the CDU, the party has lost a significant number of voters, ostensibly to the far-right Alternative for Germany (AfD), which entered the national parliament for the first time in 2017 as the third largest party.

Merkel's 2015 decision to allow almost a million migrants, many of them refuges from Syria, proved highly divisive. The CSU, the Bavarian sister party of the CSU, was hit even worse by the hemorrhage of votes to the AfD and the crisis threatened to bring a decades-old alliance between the two on immigration and security to an end.

Meanwhile, the SPD on Monday signaled that it was shifting to the left with greater spending on welfare.

The move represents a clear break from the "Hartz” social welfare reforms of former Chancellor Gerhard Schröder, who led Germany from 1998 to 2005 before losing to Merkel. While the reforms have been credited with revitalizing the German economy, they've also been blamed for the social pain that has seen support for the party lurch away from its traditional working class base.