The moderate pragmatist with the double-barreled name beat out Merkel critic Friedrich Merz in a second-round runoff to take over from the chancellor as party leader. For Merkel herself, it was a late-career victory.

Annegret Kramp-Karrenbauer was voted successor to Angela Merkel as leader of the Christian Democratic Union (CDU) at the party's conference in Hamburg on Friday.

In a razor-thin decision, the centrist politician received 51 percent of the vote from delegates in a second-round runoff against her main rival, the businessman and traditional conservative Friedrich Merz. The third candidate, Jens Spahn, was eliminated in the first round.

Addressing delegates ahead of the vote, Kramp-Karrenbauer spoke of perceptions that she was a "mini-Merkel," saying: "People consider me a copy, just more of the same, but I can tell you that I stand here as my own person, as myself."

Kramp-Karrenbauer, who was the state premier of Saarland between 2011 and 2018, was Merkel's favored successor. She has served as the CDU's secretary general since February.

Merkel remains Germany's chancellor and can look forward to working with a close ally at the head of her party. But given that German chancellors are almost always party heads, AKK, as she's known, must now be considered a favorite to succeed Merkel in Germany's top political post as well.

A new leader for the 'last unicorn'

In her speech to delegates before the vote, Kramp-Karrenbauer sought to hit positive notes. She recalled joining the CDU in the 1980s because the party was, in her eyes, the only one that offered a centrist alternative to doomsday scenarios like nuclear war.

It was "the party that didn't see everything pessimistically" and "that drew people from all political realms into the middle," she said.

The implication was that with her at the helm, the CDU would be a moderate force capable of negotiating challenges like the rise of far-right populism and resurgent nationalism.

While acknowledging that the party was going through a trough in popularity, Kramp-Karrenbauer argued that the CDU's dip was far less drastic than other conservative parties around the world. She even went so far as to call the Christian Democrats the "last unicorn in Europe."

This vaguely surreal image was in keeping with a speech that was a bit general at times but surprisingly passionate for a self-proclaimed moderate who envisioned a party that "had the better ideas" rather than "attacking opponents most sharply." 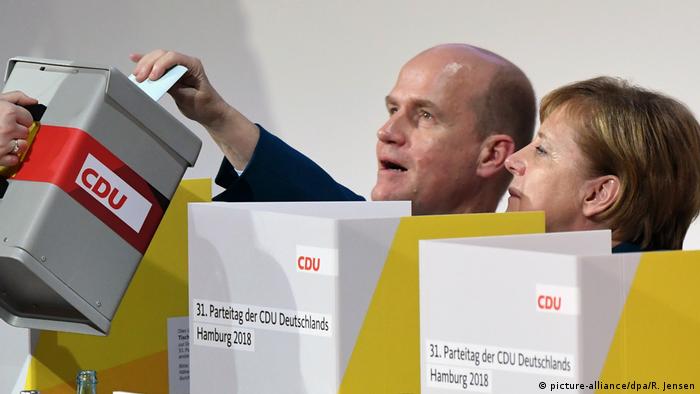 One final victory for Merkel

The big winner on the day, other than Kramp-Karrenbauer, of course, was Angela Merkel.

Not only did Kramp-Karrenbauer run her campaign for the party chair by promising a large measure of continuity. Significantly, when arguing that CDU had to remain a big-tent association of the center, she turned to "Angela" to acknowledge the role of the chancellor and former party chairwoman of 18 years in moving the conservatives into the middle.

Kramp-Karrenbauer's election is essentially an endorsement, if not a particularly ringing one, for a centrist course and more diverse party than the return to conservative fundamentals and the male-dominated past offered by Merz. His cause was perhaps hurt by a rather impersonal speech that got off to a slow start, although he almost pulled off an astonishing comeback.

Notwithstanding statements by all parties to contrary, it would have been difficult to imagine Merkel seeing out her last term as chancellor until 2021, if a fierce critic like Merz had led her own party. With her protegee and ally AKK occupying that position, Merkel's political end is far more likely to be gradual and harmonious. 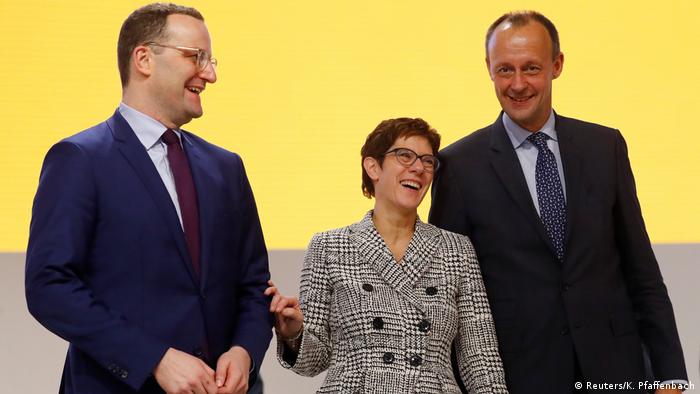 A huge task to come

Nonetheless, the wafer-thin margin of Kramp-Karrenbauer's victory underscored the urgency of her first task: to bring the two factions of the party together. The new Christian Democratic leader was commensurately inclusive in victory.

"It was a race for which other parties envy us, conducted in the spirit of fairness," Kramp-Karrenbauer said. "I would be very happy if both Jens Spahn and Friedrich Merz participated in our work to come."

For his part, Merz asked his followers to give Kramp-Karrenbauer their support and to vote for Spahn as a member of the party executive. But he declined to put himself forward for any other party offices.

In a last gesture, the new party chairwoman invited her two more conservative male competitors up on stage for a final photo op and a bath in applause. But it is anyone's guess as to how long this sort of harmony will persist in a party whose deep divisions were on more than ample display in Hamburg.

Germany’s largest party has elected Chancellor Merkel’s close ally Annegret Kramp-Karrenbauer as its next leader. The party now desperately needs her to shake it up, writes DW Editor-in-Chief Ines Pohl. (07.12.2018)