Conservatives to pick Angela Merkel′s successor as CDU head | Germany | News and in-depth reporting from Berlin and beyond | DW | 07.12.2018

Riding high in opinion polls, Christian Democrats are meeting this weekend to choose Angela Merkel's successor. Party leadership is often a springboard to the chancellorship, and whom to choose will be a tricky decision. 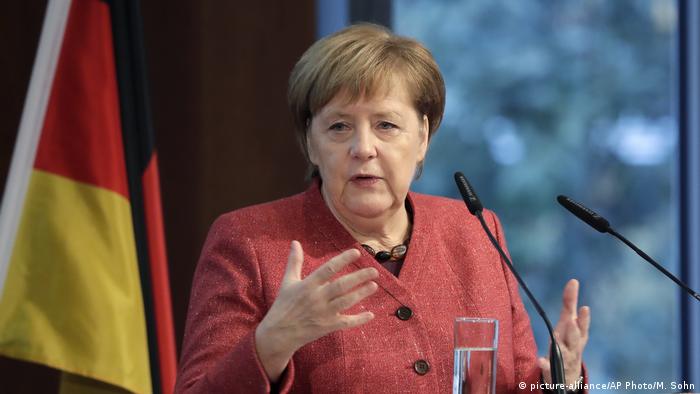 The 1,001 delegates of the Christian Democrats (CDU) have been tasked with electing a new party chair and other internal leaders during a two-day conference starting on Friday in Hamburg. De facto, they will also be seeking their front-runner to take over power, sooner or later, from Angela Merkel when her long tenure as the head of the German government ends.

"I'm very grateful that I could be party chairwoman for 18 years — it is a very, very long time and the CDU of course had its ups and downs," Merkel said as she arrived at the conference venue. "But we won four national elections together ... and I am happy I can remain chancellor."

The question of who would succeed Merkel became urgent in late October when she announced that she would not seek to extend her 18 years as CDU party chairwoman this year or run again for re-election as chancellor when the current Bundestag expires in 2021.

Several candidates immediately expressed interest in the post, with two favorites and one dark horse emerging. The favorites are Annegret Kramp-Karrenbauer, an ally of Merkel's and the party's current general secretary, and the Merkel detractor Friedrich Merz, who went into private business after his tenure as the CDU's parliamentary whip.

German Health Minister Jens Spahn, a frequent critic of Merkel, is the other prominent name in contention, but, at the age of 38, he is considered quite young and seems to lack the support that the other two aspirants have found.

According to Germany's latest Deutschlandtrend survey, carried out by public broadcaster ARD, some 45 percent of polled voters backed Kramp-Karrenbauer to lead the CDU, with Merz receiving 30 percent support. Spahn trailed with 10 percent.

Ahead of the vote on Merkel's successor, support for the CDU jumped four points to 30 percent, according to the Deutschlandtrend survey, which was released Thursday.

Delegates will elect their new chair on Friday. All candidates will be given the chance to address the conference, and nominations for the office are possible until shortly before balloting begins. The winner must take an absolute majority, with a runoff between the top two in case no one clears that hurdle on the first pass.

All of which means that there could be considerable drama as Germany's biggest political party determines the direction that it — and quite possibly the country — will take in the future.

Merkel's name is not on the ballot, but there is no question that Friday's vote is a referendum on the sitting chancellor.

She took the decision to begin to end her political career after opinion polls and a pair of disappointing regional elections showed that the CDU's popularity had hit new lows. Many grassroots members blame the decline on Merkel's relatively welcoming stance toward displaced people, which the far-right Alternative for Germany party seized upon to nick voters from the CDU. The Christian Democrats are thus very much split into pro- and anti-Merkel camps. 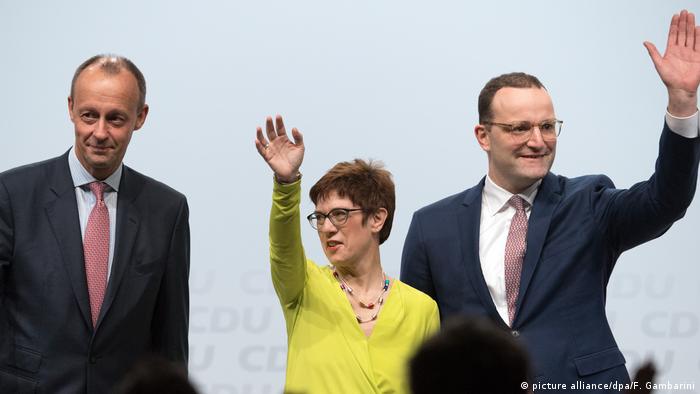 Merz (left), Kramp-Karrenbauer (center) and Spahn have different visions for the CDU

The chancellor's defenders are lining up behind the 56-year-old Kramp-Karrenbauer, whom many regard as her preferred choice for a successor and who is sometimes even called, not always positively, "Mini-Merkel." In any case, AKK, as she's known for short, is the most moderate of the three main candidates and would represent continuity.

The most radical departure from Merkel and her policies would be the 63-year-old Merz. Once considered a CDU rising star, he is perhaps best remembered for launching a debate in the early years of the millennium about whether Germany needed to defend its "leitkultur" (guiding culture) against foreign influences. After losing a power struggle with Merkel shortly thereafter, he withdrew from politics. Many observers expressed surprise when he threw his hat into the ring for the CDU leadership this fall.

Polls among CDU members and voters suggest that Kramp-Karrenbauer carries a narrow advantage going into the conference. But Merz performed well in a series of regional debates and is likely to attract votes from supporters of the much more conservative Spahn should the decision require a runoff. So, the race is too close to predict, which should have everyone on the edge of their seats — especially Merkel.

The candidates to succeed Merkel as CDU party leader

Chancellors have almost invariably headed their parties, which is why Friday's winner will have an inside track on becoming Germany's first post-Merkel leader. Conversely, chancellors who don't lead their parties tend not to last very long.

By forgoing another term as party chair, Merkel has weakened her hold on power. And, although she says she intends to see out her current tenure as chancellor, an office she has held since 2005, her ability to do that will depend directly on whom the delegates in Hamburg pick.

The Deutschlandtrend survey also showed that most voters support Merkel finishing out her term as chancellor. Only supporters of the business-friendly Free Democrats (FDP) and the far-right AfD backed her early departure from office.

Whatever happens, the CDU will move to the right: Even Kramp-Karrenbauer has taken a more restrictive stance on migration. But it's not hard to imagine Merkel as chancellor working smoothly together with another moderate woman, particularly one whom she herself picked for the party's general secretary.

The same most decidedly cannot be said of Merz. Not only is the businessman far more conservative than the chancellor on almost every issue: He may also long to usher Merkel off the political stage in much the same way as she did to him in the early 2000s. Whether that would be a good thing for the CDU remains to be seen.

The mood at the regional debates was notably collegial, particularly when compared with US or UK politics. Nonetheless, the delegates' vote on Friday has the potential to divide the party.

Much like Germany as a whole, the CDU is very much split on the chancellor. Many party members favor a swing back to the right. All the same, Merkel remains one of the country's most popular and magnetic political figures and has established herself as part of an iconic trio of long-standing conservative chancellors. The others were Konrad Adenauer and Helmut Kohl.

If delegates in Hamburg are more or less evenly split and disagreements about the CDU's future direction turn rancorous, it will be even more difficult for Merkel's successor to live up to her legacy.

Some of the CDU's recent decline in popularity may be the fault of Merkel herself, but it would be ludicrous to attribute all of the party's misfortune in these generally disruptive political times to its leader alone. To reverse the party's bleeding of support, delegates in Hamburg will need to make a strong statement about the CDU's future course — and unify members behind it.

If not, in replacing Merkel, the CDU could lose its hold on Germany's top political office.