Angela Merkel′s potential successors: What is their foreign policy? | Germany | News and in-depth reporting from Berlin and beyond | DW | 01.11.2018

The race to take over from Angela Merkel as leader of the Christian Democratic Union (CDU) has been narrowed down to three main candidates. And the choice could turn out to be a consequential one for Germany's neighbors. 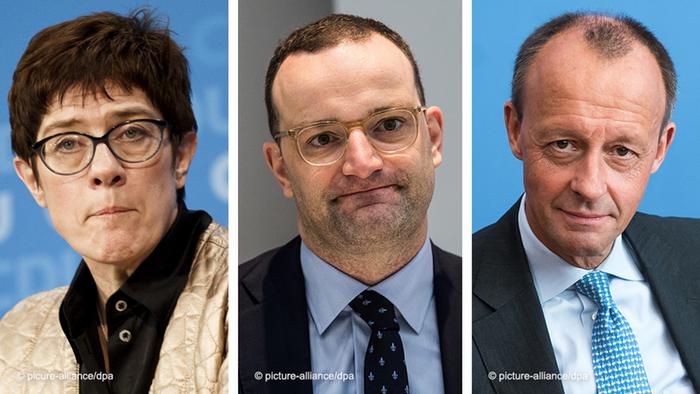 It's been a long time since the 1,000 or so delegates of Angela Merkel's Christian Democratic Union (CDU) have had this much power. They are about to choose who will succeed the German chancellor as head of the party.

The appointee will almost certainly run as candidate for chancellor at the next federal elections in 2021 for Germany's major center-right party. Given that the CDU is still the biggest party in the country, the next party leader could well be the next German leader.

That means that the opinions of the three major candidates are suddenly of keen interest to Germany's allies and enemies alike. Though the three figures are still setting out their agenda, there are clues to be gleaned. Here's what one might expect:

The surprise candidate, an old Merkel rival who rose dramatically in the aftermath of her announcement on Monday, is also the only one to have given a public press conference so far. Though Wednesday's 20-minute appearance did not offer much concrete policy, Merz did criticize Merkel's approach to one key issue: the future of the European Union.

More specifically, the reforms proposed by French President Emmanuel Macron to deepen integration in the bloc.

"I am indeed concerned that we have too few answers to the proposals of Emmanuel Macron," he told reporters. "I think he deserved more, and to get a substantial answer from Germany. By the way the same goes for the largely unknown white paper by the European Commission on the future of the EU."

That paper, which was published in spring 2017 after the Brexit referendum in the UK, included five proposals on how the EU should move forward. "There was practically no answer to that from the member states," Merz said. "Europe's biggest challenge in the next few years will be holding the Eurozone together."

Merz described himself as "a committed European and trans-Atlanticist," and given that he works for a huge US asset management company, BlackRock, and that he is chairman of Atlantik-Brücke (Atlantic Bridge), a private association that promotes ties between Germany and the US, it seems clear that his main focus will be Germany's traditional ties with the West.

But while he considers himself a great friend of America, he has criticized US President Donald Trump's trade policy.

As a supporter of NATO he considers Russia a serious risk, but has also noted that the West occasionally ignores Russia's sensibilities.

The candidate considered closest to Merkel has been working for some time to address her perceived foreign policy deficits. The CDU general secretary's only major political post to date has been state premier of Saarland, which at least means she has good ties to France.

To that end, she visited the US in the spring, where she addressed a meeting of US governors and visited a BMW auto factory.

Indeed, Kramp-Karrenbauer's reputation and her support for Merkel's migration policy suggest that she will pursue a similar line. Despite taking a tough line on undocumented migrants, and calling for an "obligatory age check" for unaccompanied minors, she also spoke out against unilateral border closures in the EU, on the grounds that it would destabilize unity in the bloc.

The same goes for Kramp-Karrenbauer's Russia policy, such as it is: like Merkel, her public statements suggest she would maintain contact with President Vladimir Putin, while remaining skeptical.

The young health minister began his rise in politics last year by depicting himself as the CDU's young anti-Merkel populist, not afraid to publicly criticize the chancellor's migration policy. That helped him gain national attention, though since rising to the cabinet he has kept his focus and his public statements largely to his departmental issues.

But on Thursday, pitching his candidacy as CDU leader in a guest article in the Frankfurter Allgemeine Zeitung, Spahn returned to the theme, describing the question of migration as "the elephant in the room."

"The pious plea to simply no longer talk about September 2015 will not get us anywhere," he wrote, before identifying Merkel's decision in that year to open Germany's borders to a group of refugees as the crucial dividing issue for his party.

He went on to demand "functioning EU external border protection, inner-European distribution, and conditions for successful integration," all of which suggest that his foreign policy will be fairly one-note.

It's also likely that he would be the one most likely to get on with US President Donald Trump. Spahn was one of the first to visit the president's new ambassador to Germany, Richard Grenell, and has already visited the White House, though mainly for a chat with National Security Advisor John Bolton.

In fact, while his foreign policy opinions are similar to those of Merz, the way he expresses them is a lot more pugilistic: "Look at Russia or Islamist terror, it's getting much less secure in our neighborhood."