Angela Merkel rises to the occasion after her party's disastrous showing in the Hesse state election. Offering to step down as CDU head is a clever way to prepare to bow out altogether, says DW Editor-in-Chief Ines Pohl. 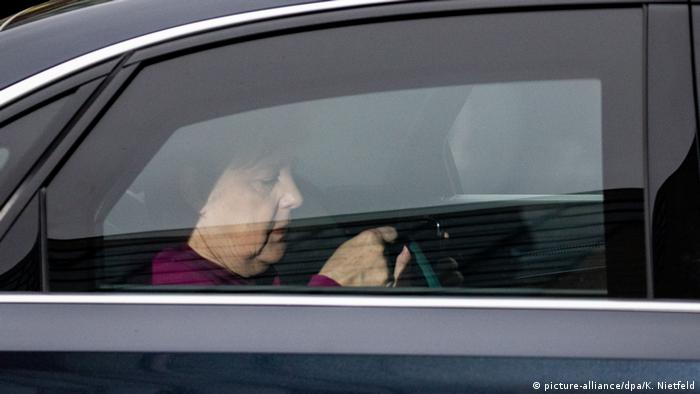 The governing coalition of the Social Democrats (SPD), Christian Democrats (CDU) and Christian Social Union (CSU) has been in office for all of half a year. And, for half a year, a government that is for the most part busy navel-gazing hasn't led Germany but, rather, paralyzed the country. In-house squabbling dominates the agenda instead of urgent issues such as the rise of right-wing nationalism, not just in Germany and other European countries but worldwide. The challenge of migration remains unanswered, nor is a well-thought-through position on how to handle the dangers and opportunities of artificial intelligence in sight. Not to mention climate change.

The German people have had enough of this self-centeredness and self-flagellation. Sunday's vote in the economically strong state of Hesse proves that the country wants change. The majority no longer trusts Angela Merkel — after 13 years in office — to steer the process of renewal.

Merkel is aware of this. With surprising candor, she has mentioned over the past few days how difficult it is to manage one's own succession after so many years at the helm. Today, she grasped the last opportunity to play an active role in this process at all.

Traditionally, a CDU chancellor also heads the party. That is not dictated by the party's charter, but by the logic of power: It makes governing far easier.

Merkel has always made it clear that she would not relinquish that tool. Her announcement not to run for party chair again in December shows how serious the situation is. It's proof that Merkel is losing the backing of her own party. It also proves that Merkel has not lost her instinct for survival even as she is on her way down.

She would rather waive the party leadership than not be reelected. Once again, she is proceeding in a pragmatic fashion — surprisingly, always at her best when times are toughest.

Support for her candidate of choice

That wins her a bit of time. She can work on backing her successor of choice, Annegret Kramp-Karrenbauer. Most of all, she remains the chancellor for a while longer.

In the end, the move won't just be good for her, but for her party, too. The ball is now again in the court of the government coalition partner, the SPD.

Merkel's decision has made it even more likely that the SPD will withdraw from the coalition, which would shift the burden of responsibility for the government's failure onto the Social Democrats' shoulders.

Merkel remains true to herself — to the very end, which has now moved considerably closer.

Despite a large drop in support, the CDU has won the Hesse state regional poll, giving the chancellor some welcome breathing room. But the weakness of the political center in Germany remains glaringly obvious. (28.10.2018)

When Angela Merkel became Germany's first female chancellor in 2005, many saw this as proof that it is not always a disadvantage to be underestimated by inner-party rivals. DW looks back at the beginnings. (29.10.2018)

German Chancellor Angela Merkel has offered to give up the leadership of her Christian Democratic Union (CDU), reports from within her party have said. The conservatives suffered massive losses in two regional elections. (29.10.2018)