Despite a large drop in support, the CDU has won the Hesse state regional poll, giving the chancellor some welcome breathing room. But the weakness of the political center in Germany remains glaringly obvious. 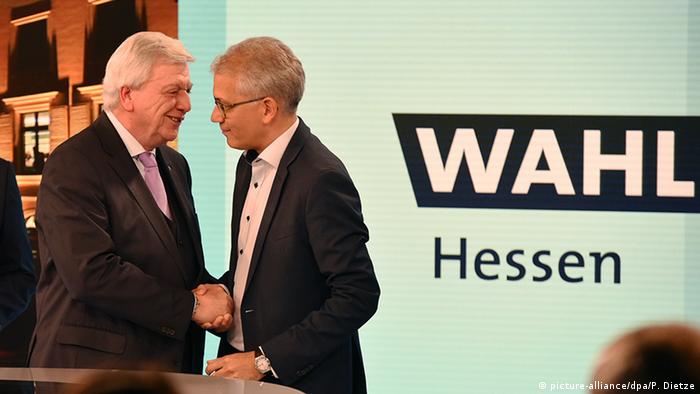 There were a couple of points of solace for Angela Merkel's conservative Christian Democratic Union (CDU) as preliminary results were announced for Sunday's regional election.

The CDU's tally of 27 percent may have been down some 11 points compared with the last Hesse vote in 2013, but it was slightly better than pre-election polls had predicted and gives incumbent state premier and Merkel ally Volker Bouffier a mandate to form the next government.

The Social Democrats (SPD) suffered a similar drop, claiming 19.8 percent of the vote — the party's worst result in Hesse since 1946. That didn't have anyone in red dancing for joy, but it's probably just respectable enough to counter demands from the SPD's left wing that the party quit its grand coalition with conservatives at the national level. That, too, should be welcome news for Merkel.

A good day for the Greens

The big winners on the day, compared with five years ago, were the Greens, who rose more than eight points to take 19.8 percent of the vote. This result is good enough to ensure a continuation of the current Bouffier-led, conservative-Green coalition in Hesse, though only just. 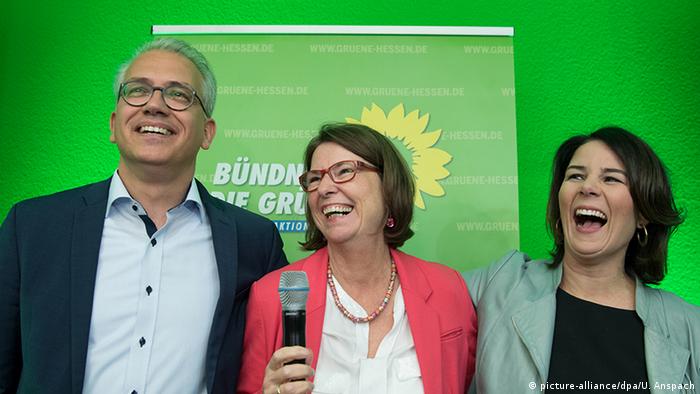 Hesse's Green politicians were all smiles when the results were announced

"It's painful for the CDU that we lost so many votes," CDU General Secretary Annegret Kramp-Karrenbauer told supporters in Berlin. "But it's good that Volker Bouffier headed off a left-wing government and will get the chance to continue his work with the Greens in the regional government."

Meanwhile, the far-right populist Alternative for Germany (AfD) can now celebrate being represented in all of Germany's 16 regional parliaments. On the other hand, their fourth-place 13.1 percent share of the vote suggests that the party's appeal may have hit a momentary ceiling in western Germany.

The Left Party got 6.3 percent of the vote while the center-right Free Democrats (FDP) received 7.5 percent, both of which were improvements over 2013 and continue the trend of Germany's smaller parties gaining at the expense of the country's traditional political powers.

Both the CDU and the SPD are interpreting their losses as a sign of popular dissatisfaction with the national government, and rightly so. In one survey, half of respondents said that they had used their vote to send a message to Berlin.

Both partners were keen to blame conflicts within the government over migrant policy, implicitly pointing the finger at Interior Minister Horst Seehofer, the head of the CDU's Bavarian sister party, the CSU. The suggested message was that if the quarrels stop, a recovery will follow.

"We knew that this was a special sort of election, one that was overshadowed by the national coalition," Bouffier told supporters. "The message for the government is that people want less fighting and more solutions."

The mood among Social Democrats was far more downbeat, and their chairwoman, Andrea Nahles, also called for the government to change the way it worked. Nahles said that national politics had "contributed a lot" to the SPD's poor showing in Hesse. While acknowledging that the SPD would "have to change," she demanded change from conservatives as well, saying that she and SPD General Secretary Lars Klingbeil would present a "road map" to that end Monday.

But there were no immediate signs that Social Democratic leaders were seriously considering pulling out of the government. 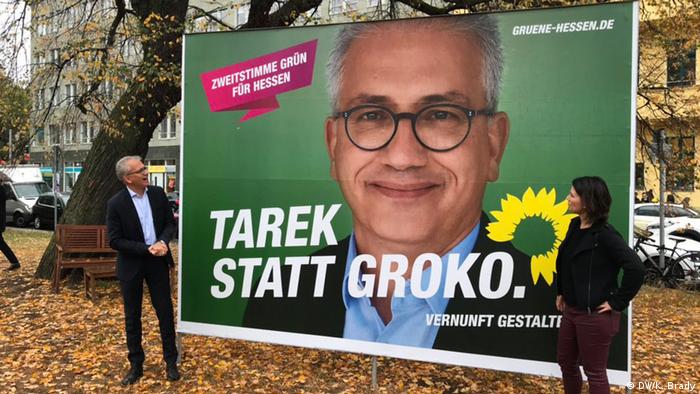 Green Party co-leader Robert Habeck said on Sunday evening that he didn't believe the Hesse results would doom the national coalition. But that did nothing to dampen the environmentalists' mood as they celebrated their best ever showing in the western German state.

"Hesse has never been this green," Baerbock told German television.

The Greens also recorded historic highs in Bavaria two weeks ago but are unlikely to receive a share of power there. In Hesse, however, things are different. While Bouffier could perhaps try to form a coalition involving the SPD, there's little appetite for that constellation, and the incumbent is expected to team up with the Greens again — perhaps with the help of the FDP.

The SPD and Greens were neck and neck at second place, and 24 percent of respondents in an opinion survey said that of all the parties, the Greens offered the best solutions for the future. The environmentalists are threatening to replace the SPD, Germany's oldest party, as the main political force on the left. 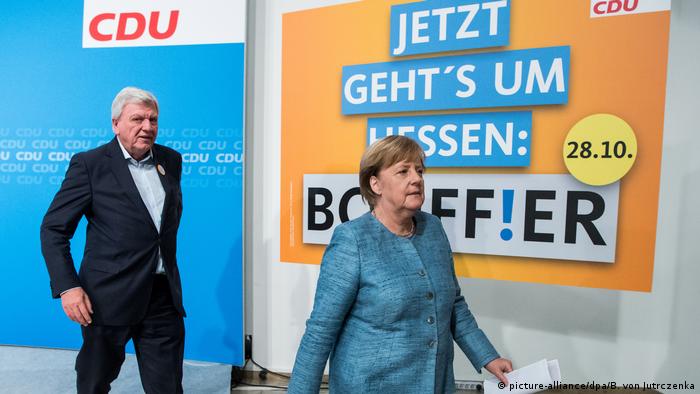 The consensus is that Merkel wasn't much help to Bouffier

Getting through the year

No matter how you slice it, 2018 has been a difficult year for the grand coalition, German conservatives and Angela Merkel. The goal now will be to get through the year without any further crises. But no one is out of the woods yet.

Both conservatives and Social Democrats are facing party executive and other committee meetings at which their respective leaderships will certainly get an earful about poor electoral results and dismal poll numbers.

Merkel also has to deal with a full party conference from December 6 to 8, ahead of which she must decide whether to run for another term as party chairwoman. In making up her mind, she may ponder the history of her predecessor as chancellor, the Social Democrat Gerhard Schröder.

Schröder gave up the chairmanship of the SPD in 2004 in a gambit to save his chancellorship. The following year, he was voted out of power – after calling an early election and narrowly losing to Merkel.

After the election in Hesse, the right-wing nationalist AfD is now represented in all of Germany's parliaments. The main focus for the Bundestag will now be its own problems, writes DW's editor-in-chief Ines Pohl. (28.10.2018)

With the legitimacy of her big-tent coalition in question, the German chancellor hopes for a positive outcome in the final regional election of 2018. But the political wind is blowing against big parties. (27.10.2018)