After the election in Hesse, the right-wing nationalist AfD is now represented in all of Germany's parliaments. The main focus for the Bundestag will now be its own problems, writes DW's editor-in-chief Ines Pohl. 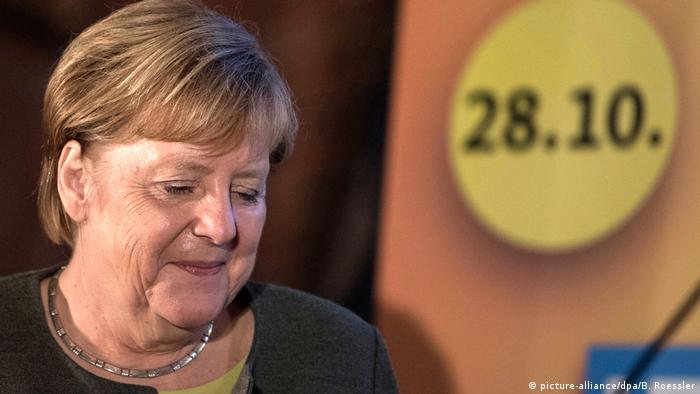 This weekend, as the world mourned the murder of 11 Jews in Pittsburgh, USA, Germany's right-wing nationalist AfD party gained entry to the last state parliament where they lacked representation. More than 12 percent of the electorate voted for them in the state of Hesse, home to Germany's banking and economic hub, where salaries are the highest in the country and unemployment has been falling for years.

This parallel is particularly alarming when one considers that one of the co-leaders of the AfD recently described the Holocaust as mere "bird shit in […] German history."

So this party is now represented not only in the federal German parliament, the Bundestag, but also in all 16 state parliaments. My country should be appalled by this; it should dominate the domestic headlines. The fact that this is not the case has a lot to do with the reason why the AfD was able to become so successful in the first place.

Voters fed up with the quarreling

Angela Merkel has been in power for 13 years. And her opinion poll ratings have never been as bad as they are now. This is partly because a degree of weariness has set in. It's also because of the chancellor's controversial refugee policy. Above all, though, it's because of the constant quarreling within the government. Right from the beginning, the coalition of CDU/CSU and SPD was an alliance of necessity, and lacked a vision with which it could have won the people over. However, all the surveys now show that the open power struggles are what irritate the voters most.

A clear majority of Germans want no more of this grand coalition. So this election in Hesse was a fateful one for Merkel and her government. Had Merkel's ally, the head of government in Hesse, not been re-elected, she would have had an open rebellion on her hands. As it is, the CDU has suffered heavy losses but is still clearly the strongest force in the state. Right now, then, Merkel has nothing to fear on that front.

However, her governing alliance is still far from secure – because in this state election her SPD coalition partners again lost heavily, languishing at around 20 percent. This in a federal state where the Social Democrats have deep roots.

SPD no longer a reliable partner

After this election debacle the calls from those who insist the SPD can only survive if it leaves Merkel's governing coalition as fast as possible will grow even louder.

This internal discussion will continue to preoccupy Germany over the coming weeks – preventing the government from doing its job. It's almost superfluous to comment on what a disaster this is, not only for our own country but for Europe, too, which is growing ever more polarized and coming apart at the seams.

There is some good news, though, on this election night. Hesse will be able to form a governing coalition whose members are all firmly anchored in our constitution, and will govern on a solid constitutional basis. Right-wing nationalist forces may now have representation in all German parliaments, but the anti-Semites have no seat in government.

A small number of Jewish people are founding a group to support the far-right Alternative for Germany party. They say the reports of the AfD's anti-Semitism are overblown. (07.10.2018)

With the legitimacy of her big-tent coalition in question, the German chancellor hopes for a positive outcome in the final regional election of 2018. But the political wind is blowing against big parties. (27.10.2018)