German Chancellor Angela Merkel says she will not run again as the leader of her Christian Democratic Union (CDU), but will remain chancellor until 2021. Her conservatives suffered massive losses in two state elections. 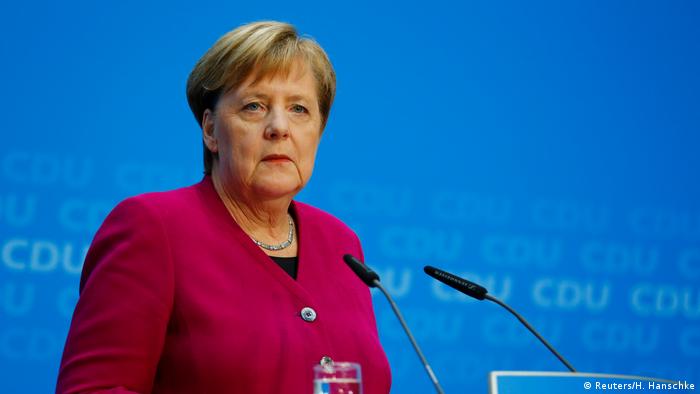 14:33 Polish Foreign Minister Jacek Czaputowicz said he supported Merkel's decision to keep her post of chancellor, adding that the German politician plays an important role in stabilizing the EU.

14:24 The head of the SPD youth wing, Kevin Kühnert, called to bring forward the SPD party summit scheduled for next year. Following Merkel's decision not to run as head of the CDU, the SPD leadership should also face a new vote and obtain a new mandate from the party base, he said.

14:13 Frankfurt's DAX trading index climbed some 2 percent by Monday afternoon, a development believed to reflect the German market's positive response to Merkel's announcement. At the same time, the value of the euro slightly receded to 1.138 US dollars.

14:08 Merkel says we should "wait and see" who would replace her as the CDU head.

"I am someone who can work very well together with a lot of different people, and I think I have a reputation for it."

German Chancellor Merkel says she will not seek re-election

13:40 SPD chief Andrea Nahles says Merkel has done an "extraordinary" job at the helm of the CDU, steering it out of deep crisis. Nahles also told reporters that changes at the top of the CDU might benefit the grand coalition by smoothing over "these arguments over personnel and direction" between the partners.

13:36 Bavaria Premier Markus Söder from the CSU, CDU's sister party, says that the CDU leadership is an internal issue for Merkel's party.

"We are respectfully acknowledging it," Söder said of Merkel's decision not to run. "We'll see now what happens."

13:28 The Green Party chief Annalena Baerbock declares "respect" for Angela Merkel's leadership of the CDU, especially for being "the first woman in this place which is sometimes rather dominated by men."

The Green Party is the most likely coalition partner for Merkel's CDU in Hesse after gaining ground at Sunday polls.

13:00 Merkel says she feels it is time for her to stand aside to make room for new leaders within the CDU.

"I do know this hasn't been done before, it is unprecedented, but I believe it offers far more opportunities than risks for the country, for the German government and for my party," she says.

12:47 Standing next to her at the press conference in Berlin, Hesse state premier Volker Bouffier praises the chancellor's decision: "Angela Merkel has made a noble decision, a right decision, a strong decision."

12:40 Merkel says she made the decision not to run for re-election as the head of the CDU before the summer recess in parliament. She adds that she will not influence talks within the party about her successor.

"I will accept any democratic decision taken by my party," she says.

12:35 Responding to a reporter's question about what she plans on doing after she leaves office in 2021, Merkel wryly responds: "I'm not worried that I won't think of anything."

She says she wanted to dispel any rumors that she might pursue a post in the European Union.

12:25 Chancellor Merkel confirms that she will not be running again as CDU chair during the party congress in December and says she is "willing" to stay on as chancellor until her term ends in 2021. The 64-year-old politician adds that she won't be taking up any other positions.

"The time has come to open a new chapter," she says.

12:18 "As the chancellor and the chair of the Christian Democrats, the buck stops here, both for successes and failures," Merkel says.

12:15 German Chancellor Angela Merkel, speaking at a press conference in Berlin, described the election results in Hesse as "bitter" and "disappointing" and said that the state branch of the party should have be able to achieve a better result.

"I feel the need to pause to think — I am certainly doing that, and I want yesterday's election to be seen as a cutoff point."

"I am not suggesting that the voters had any blame for this at all," she says, thanking those voters who did support the party and helped it win the highest percent of the vote on Sunday. 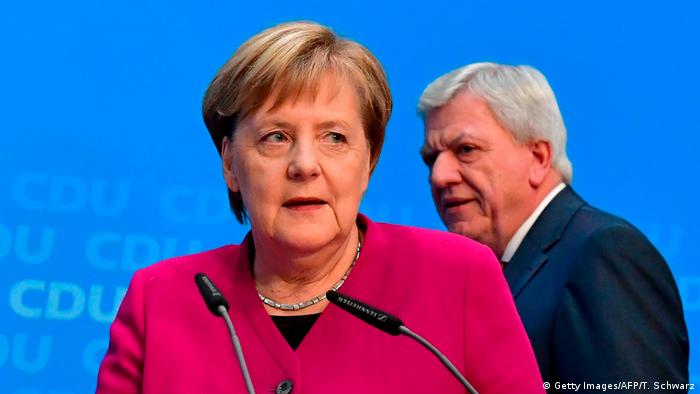 11:55 Health Minister Jens Spahn will also be running to replace Merkel when she steps down from her post, according to CDU sources. The 38-year-old has frequently criticized Merkel and belongs to the party's right-wing branch.

11:30 The SPD has set a deadline for their conservative coalition partners to clear up internal party conflicts by December and to suggest improvements for better cooperation within the federal government, news agency DPA reported. The SPD particularly noted that CSU leader and Interior Minister Horst Seehofer, the head of Merkel's Bavarian allies, has become a burden.

Seehofer said "it's a shame" that Merkel will be leaving her post at the helm of the CDU. Seehofer has sparred with Merkel for years, particularly over refugee policies. His attempt to turn back migrants at the German-Austrian border and his push for a hard-line immigration plan nearly brought down Merkel's government this summer.

11:25 CDU Secretary General Annegret Kramp-Karrenbauer is also throwing her hat in the ring to lead the party after Merkel, according to party sources. Kramp-Karrenbauer, also known as AKK in Germany, previously served as the premier of the small southwestern German state of Saarland and was hand-picked by Merkel for the post of general secretary. 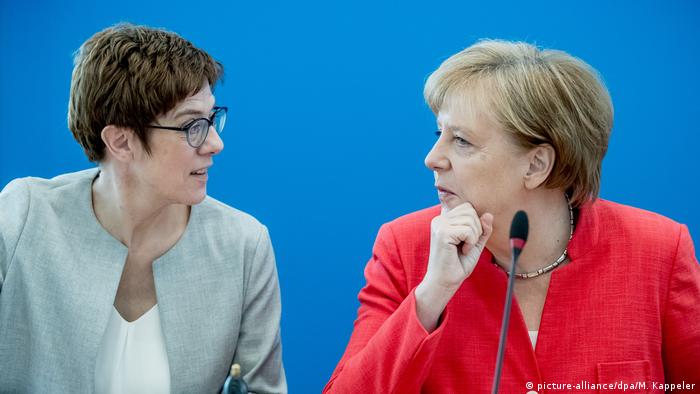 11:10 The far-right Alternative for Germany (AfD) welcomed reports of Merkel's exit as CDU party chair, with AfD co-leader Jörg Meuthen saying it is "good news" and that he expected her to "give up her chancellorship soon."

Alexander Gauland, who is also a co-leader of the AfD, said that most of the prospective Merkel successors won't pose a threat to his party, except for Health Minister Jens Spahn.

"If Mr. Spahn became chancellor tomorrow, then it would be more difficult for us," Gauland said. Spahn has been a vocal critic of Merkel from within the CDU, urging for the party to take a more conservative course.

10:55 Merkel intends to remain chancellor until her fourth term ends in 2021, her spokesman Steffen Seibert said. According to news agency DPA, after that point, she will no longer run as a member of parliament and will not take up any European Union positions in Brussels either.

10:50 The center-left Social Democrats (SPD), who are in a governing coalition with Merkel's conservative alliance, also saw their support drop sharply in Hesse and Bavaria's state elections. Unlike the CDU, however, the SPD says it isn't currently considering a party leadership shakeup.

"There's no discussion of a personnel restructuring in the SPD," party chairwoman Andrea Nahles told reporters in Berlin on Monday morning. The SPD leader also appeared to dismiss the possibility of pulling the center-left party out of Merkel's coalition, saying that the SPD was focusing on moving forward. Nahles has been under pressure to leave the governing coalition, particularly from the party's youth wing, the JUSOS.

10:30 The poor performace of the parties in Merkel's governing coalition in the Hesse election could have a negative impact on Europe, warned EU Economy Commissioner Pierre Moscovici.

"The fragility of a country like Germany is always a threat for Europe," Moscovici told French broadcaster Public Senat. "So we are paying attention."

10:15 The race is now on to replace Merkel, not only as the leader of the CDU, but also possibly as chancellor. DW has broken down a list of potential successors:

10:10 Christian Lindner, the head of the business-friendly Free Democrats (FDP), called on Merkel to step down not only from her role as the head of the CDU, but also as chancellor. "Ms. Merkel is giving up the wrong position," he said in Berlin. He said her decision to give up one and not the other will make her government more unstable.

10:00 The former head of the CDU/CSU's parliamentary party in the Bundestag, Friedrich Merz — who has been a fierce critic of the chancellor — will reportedly be running to replace Merkel as CDU chair during the party's conference in December, according to the German daily Bild. He was also previously a member of the European Parliament and currently serves as the supervisory board chairman of BlackRock Germany.

9:55 The surprise news follows poor results for Merkel's CDU in Sunday's state parliamentary election in Hesse, which saw Merkel's party drop over 10 percentage points to score 27 percent of the vote. The CDU's sister party in Bavaria, the Christian Social Union (CSU), also bled support two weeks ago in Bavaria's state election. Both the CDU and CSU emerged the winners, but analysts and voters viewed the state elections as a referendum on Merkel's coalition government in Berlin.

9:47 CDU sources announced that Merkel does not intend to run again as party leader, leaving the position open for a new chair to be elected at the upcoming party conference in December. She insisted, however, that she would remain chancellor. The move represents a political capitulation for the chancellor, who has previously emphasized that the party leadership and the chancellorship must be tied together.