At school, Jens Spahn said he aimed to become chancellor one day. At 22, he won a seat in Germany's parliament. Today, critics of Angela Merkel's centrist approach in the CDU are pinning their hopes on the 37-year-old. 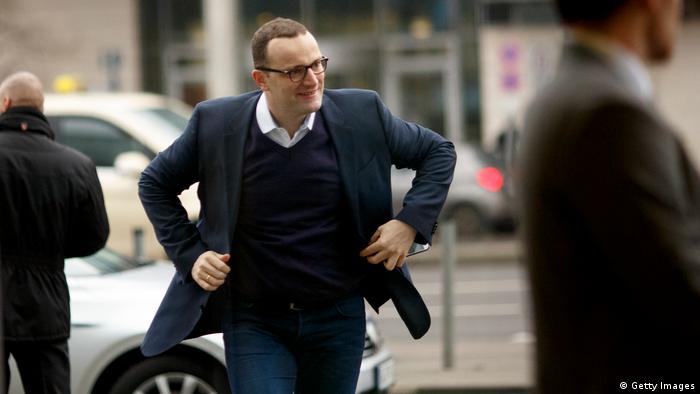 Not all members of Germany's Social Democratic Party (SPD) have yet cast their vote to decide on a possible future grand coalition. But if the majority is in favor, then Christian Democrat (CDU) MP Jens Spahn will serve as health minister in Chancellor Angela Merkel's government. That is what the party's leadership has decided. It would be a big step in Spahn's political career. But what would it mean for Merkel?

Despite being members of the same party, Spahn and Merkel are in many ways political opposites. Spahn champions much more conservative positions than Merkel, which could have boded well for a career with the CDU's Bavarian sister party, the Christian Social Union (CSU). The 37-year-old supports law-and-order policies, wants to cap the number of refugees allowed into the country and demands a burqa ban. He rejects the right to dual citizenship and favors the idea of a so-called German "Leitkultur" (which roughly translates as "guiding culture").

Spahn is passionate about his beliefs and thinks consensus-building equates to a political standstill. And yet, he doesn't want to be misunderstood as a "far-right" figure inside the CDU. Instead, he describes his politics as liberal-conservative. "I want to fight far-right extremists and their slogans just as much as I oppose right-wing Islam," he said.

In 1995, at the age of 15, Spahn joined the CDU's youth organization, Junge Union — because, he said, everyone was "so left-wing" around him. In 2002, Spahn won the majority of votes in one of Münster's electoral districts in North Rhine-Westphalia, near the Dutch border. At just 22, he became a member of Germany's parliament, the Bundestag.

From bank clerk to MP 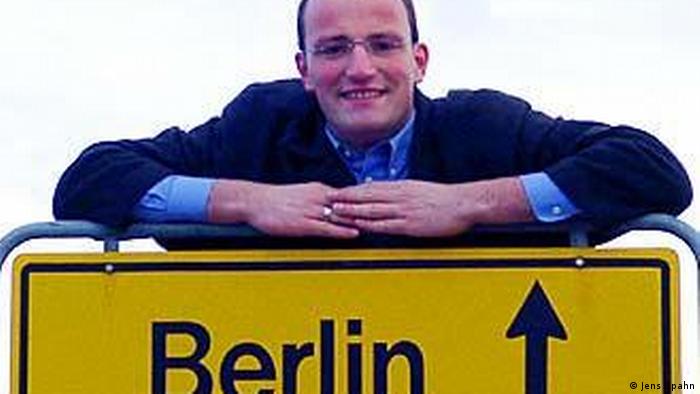 Spahn came to politics early, joining the Bundestag in 2002

Spahn was born and raised in the town of Ahaus, north of Dortmund. After graduating from a Catholic high school, he trained to become a bank clerk. Then, after getting involved in local government, he began studying politics and eventually obtained his master's degree in 2017.

He consecutively won his electoral district in every election since 2002 by a significant margin. Even in last year's 2017 general election, which saw the CDU lose seven percentage points in terms of second-votes compared to 2013. Spahn, too, did not do quite as well as in 2013. But he still managed to win 51.3 percent of the vote, just 0.7 percentage points less than in 2013.

Spahn was never the diffident kind. From the very beginning, his ambition was to "crawl ahead" bit by bit, as he himself once said, and build his career in the CDU parliamentary group. He soon specialized in health care politics, a field which is unpopular with many lawmakers. This meant he faced little competition in this area. He worked hard, getting into the intricate policy details. In 2009, he became the CDU parliamentary group's spokesperson on health care policy.

His efforts didn't get him the post of health minister in 2013 — he became a state secretary in the Finance Ministry. Instead of Spahn, Hermann Gröhe, who also hails from North Rhine-Westphalia, became Germany's health minister. And it was Gröhe's place on the party's executive board that Spahn took in 2014 when contrary to intraparty agreements, he ran for the seat at the CDU conference — and won.

Read more: The beginning of the end for German Chancellor Angela Merkel?

By this time, it must have dawned on Merkel that the young, driven and ambitious Spahn could one day challenge her politics. And by 2015/2016, when Merkel found herself under pressure for her handling of the refugee crisis, Spahn was among the first to openly criticize her for championing a "culture of welcome" and called for a change of course.

He has never backed away from this demand and thinks the CDU's modified course still won't suffice. "In Germany, one in five voters chooses divisive left-wing and right-wing parties. That's because they lost confidence in us. Which has a lot to do with migration issues and refugees," Spahn has said. Many social policy issues, he thinks, are also linked to issues of security, social order and migration.

"The impression that basic social security is insufficient also stems from the fact that a grandmother who raised five children and helped raised 10 grandchildren may receive as little as a young man who only arrived in Germany three weeks ago or may soon be deported," he said. And he thinks children's prospects of acquiring a good education are diminished because too many classes are made up of 70 or 80 percent migrants.

Spahn complains about "some migrants' macho ways" and in 2016 opposed Merkel when he successfully fought for the party to oppose the right to dual citizenship. Spahn also fought for marriage equality and married his longtime partner, journalist Daniel Funke, last December, after parliament voted to approve same-sex marriage.

Spahn's confident nature has helped him deal with homophobic comments. His reply to a hateful Facebook comment recently garnered plenty of attention.

In a comment on one of Spahn's weekly Facebook livestream, an individual had written, "You homosexuals in the party must be quite familiar with kids." The person was clearly insinuating that Spahn is a pedophile. Spahn, in turn, remained calm and replied: "Instead of posting stupid comments, you could have simply said: Great to see you supporting families."

Spahn is well aware of the power of social media and knows how to use it to his advantage. His website boasts plenty of tweets and other social media content. And he's a popular guest on political chat shows, as well.

And he's certainly no fan of the understatement. If he does serve as health minister in a prospective grand coalition, he probably won't see this as the apex of his political career but merely as a stepping stone on his way up. He's certainly driven — a quality once observed by a former high school teacher, who remembers how Spahn once stated his ambition to become chancellor one day.