CSU′s Horst Seehofer: Under fire from Bavaria to Berlin | Germany | News and in-depth reporting from Berlin and beyond | DW | 16.10.2018

CSU's Horst Seehofer: Under fire from Bavaria to Berlin

CSU leader Horst Seehofer — the German interior minister and an uneasy ally of Chancellor Angela Merkel's — is back in Berlin and vowing to play nice after Bavaria's vote. But how long can he hold on before heads roll? 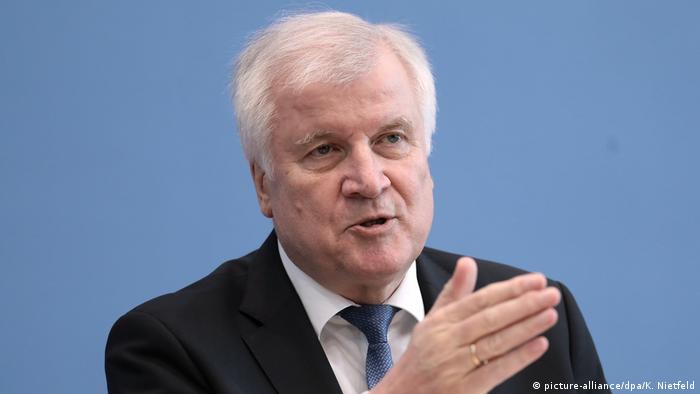 After Sunday's disastrous result for Bavaria's conservatives, Horst Seehofer prepared to face the music on Tuesday as he returned to work in Berlin. Focusing on the tasks at hand won't be easy in the shadow of the giant question mark about his future — both as interior minister and as the leader of the Christian Social Union (CSU), the Bavarian allies of Chancellor Angela Merkel's Christian Democrats (CDU).

Though Seehofer said on Tuesday that he was "open to any outcome" in personnel talks, planned for before Christmas, growing calls for him to resign from both posts could see him leave office earlier than he might have anticipated.

Seehofer has repeatedly come under fire for his combative stance in Merkel's government — not only when it comes to migration policy, but also more recently for his staunch defense of embattled former spy chief Hans-Georg Maassen, which led to the coalition government's second near collapse within three months.

Stammtisch: Bavaria state election - The times they are a-changing

Asked on Tuesday by an Egyptian journalist whether he would publicly fight less with Merkel following Bavaria's elections, Seehofer laughed and promised to demonstrate "polite behavior" going forward.

Questions remain as to who will take responsibility for the CSU's record-low result in Bavaria of 37.2 percent. Seehofer has signaled that he is not willing to bear the brunt of the blame alone.

"I didn't see a single election poster with my face on it as I was driving," Seehofer told DW ahead of the vote, when asked whether he would take responsibility if Sunday were to end badly for the CSU.

It appears that some party members are prepared to hold Seehofer responsible, however. First came the calls from CSU politicians for Markus Söder, Bavaria's state premier and their top candidate in Sunday's elections, to take over as leader, followed promptly by voices from party district groups calling for Seehofer to resign.

We want "a party congress with the goal of personnel renewal and the aim of replacing Horst Seehofer," Jürgen Baumgärtner, the chairman of the CSU's Kronach district branch, said on Tuesday.

Acknowledging Seehofer's "terrific" successes, Baumgärtner said, "We believe, however, that everything has its time."

Some say Seehofer miscalculated by aping the far-right Alternative for Germany party after the CSU lost voters to the AfD in last September's federal elections.

Instead of winning back supporters, the CSU began to hemorrhage votes to the center left, enabling the Bavarian Greens to surge through the polls on Sunday to become the state's second-strongest party, with 17.5 percent.

On Monday, Seehofer told the German broadcaster ZDF that the CSU had found itself in a "sandwich situation" on the issue of migration — with the Greens on one side and the AfD on the other. If it's deli metaphors that Seehofer is looking for, then the conservatives clearly don't cut the mustard in Bavaria.

According to the pollster Infratest dimap, migration ranked fourth in Bavarian voters' decision-making on Sunday — behind education, housing and the environment. And yet it was the political drum that Seehofer hadn't stopped beating since Merkel decided to keep Germany's borders open as displaced people began arriving in the tens of thousands in September 2015.

As support for the government wanes on a national level, Seehofer said the CSU would act as a stable force in Merkel's ruling coalition.

"I have no inclination at all for minority governments or fresh elections and everything that can come with them," he said. "This grand coalition must simply get on with reputable work and communicate it properly," he added. "In the CSU, we will do everything for the grand coalition to stay."

The coming weeks will be a test of exactly how committed Seehofer is to Merkel's government. But, with personnel changes still a possibility in the Cabinet and his party before the year is out, Seehofer's remaining well-wishers might be thinking twice about addressing his Christmas card care of the Interior Ministry just yet.

Once again, German Chancellor Angela Merkel is facing predictions that her "era" is over. But in the short-term, the main thing she will have to change is her relations with her own Christian Democratic Union (CDU). (26.09.2018)

The German chancellor needs her junior coalition partners, the Social Democrats, to govern, but the row over Germany's spy chief has opened old wounds in that party. Could an SPD meltdown spell the end of the Merkel era? (20.09.2018)