Opposition lawmakers have lodged hefty criticism against Merkel's could-be successor for questioning the right to asylum. The populist AfD said Merz has become more right-wing than they are. 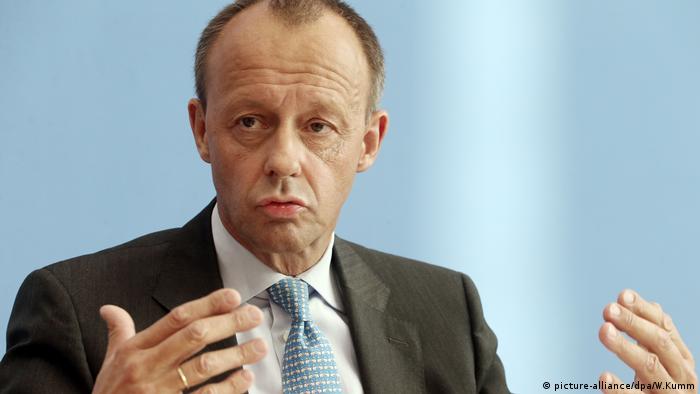 Friedrich Merz, the millionaire lawyer and financial manager who is hoping to lead the Christian Democratic Union (CDU) after Chancellor Angela Merkel steps down as party leader in December, was in trouble on Thursday after suggesting Germany should reopen the debate on the asylum guarantees in Germany's constitution.

The populist right-wing Alternative for Germany (AfD) accused Merz of stealing their policies while the Social Democrats (SPD), the CDU's partners in the federal government, called Merz "Trump light," referring to the anti-immigrant stance of US President Donald Trump.

Germany's Foreign Minister Heiko Maas, a Social Democrat, was also asked about Merz's statement at a press conference on Thursday morning. "I have no interest in commenting on the delusions and confusions of the internal CDU campaign every day," he told DW's Anja Köhler. "Whether the CDU will or should or can overshadow the AfD with such positions they will have to decide for themselves."

But Merz partially retracted the statement later on Thursday. "Of course I'm not questioning the basic right to asylum, because our politics is based on our Christian responsibility and against the background of German history," he told the AFP news agency. "But for me it is clear we can only resolve the issues of immigration, migration and asylum in a European context."

Other CDU heavyweights defended Merz's original statements. "I understood him to mean that he believed there should be a European solution to the problem," Daniel Günther, state premier of Schleswig-Holstein, told DW. "But I don't think considering undermining the right to asylum in the Basic Law is the correct path right now. That is a good tradition that we have in Germany."

Merz: We need to debate the right to asylum

On Wednesday, Merz and the other candidates for the CDU leadership, Annegret Kramp-Karrenbauer and Jens Spahn, set out their cases to about 500 party members in the eastern town of Seebach, near Eisenach. During the meeting, Merz said, "If we want to regulate immigration at the European level, then someday we will need a general debate on the fundamental right to asylum…I have long believed that we need to think about it."

Germany is the only country to have the individual right to asylum enshrined in its constitution, and many Germans believe it is the country's historical responsibility to accept refugees.

But as in other countries, debate has sprung up in Germany over whether to sign on to the UN migration compact, which aims to regulate immigration multilaterally. Merz said Germany needed to ensure the nonbinding UN agreement did not provide additional rights to migrants. Nothing in the compact offers any additional protections to what is already in German law.

AfD: Merz is more right-wing than we are now

SPD deputy chair Karl Lauterbach excoriated Merz, writing on Twitter that "he is in every way a Trump light, except that he's a millionaire not a billionaire. The Greens, who are now behind the CDU, will have to think about how nice that will be."

Germany's Green party has been surging in popularity as the fortunes of other mainstream parties have begun to wane. Merz has said publicly that he would enter into a coalition with the Green party.

Sebastian Hartmann, head of the SPD in Germany's most populous state of North Rhine-Westphalia, said Merz's statement could only come from someone "who has often sat in private jets in recent years."

Several politicians from the nationalist AfD accused Merz of stealing their ideas, including lawmaker Dirk Spaniel, who said the lawyer had even "overtaken us on the right."

German pundits echoed concerns about Merz steering too close to the nationalists' waters. The editor-in-chief of the Frankfurter Rundschau daily, Arnd Festerling, said Merz was "stirring up fears of migrants and resentment of foreigners…for personal profit," just like the "national dumbing-down" committed by the AfD.

Merz reappeared on the political scene at the end October after nearly a decade in the private sector, amassing a fortune as a corporate lawyer and sitting on the boards of several large companies, including the German branch of the largest asset management firm in the world BlackRock.

He had been a rising star in the CDU in the early 2000s at the same time as Merkel, but began opposing her after she emerged victorious over him in a fight to lead the party. He initially left politics in 2009 when it became apparent that he could not outmaneuver her and has publicly criticized her ever since.