The conservative politician left politics in 2009 after a protracted battle with the German chancellor. Now he will vie to replace her at the top of the CDU. Although they share a party, he and Merkel are poles apart. 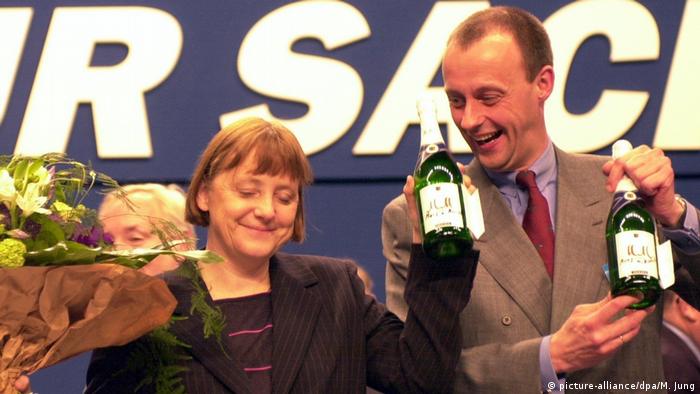 It was the surprise after the surprise: First, Angela Merkel announced she would not stand for re-election as the Christian Democratic Union's (CDU) party leader — a position she has held since 2000 — after the CDU suffered yet another embarrassing defeat in state elections on Sunday. Then, of all people, one of her most ardent critics, Friedrich Merz, announced on Tuesday that he would stand for the position.

The party leadership election will take place at the CDU's annual convention in Hamburg this December. Should Merz be successful in his bid it would be a moment of personal satisfaction as well as political revenge, for he was one of those who most clearly lost out as Merkel's political star rose.

During her ascent to party leadership, Merkel successfully dislodged Merz from the party's top echelons after a series of inner-party disputes. When the CDU and its Bavarian sister party — the Christian Social Union (CSU) — lost Germany's 2002 federal election Merkel also insisted on taking over parliamentary group leadership in the opposition, a position Merz had held for two years.

Complaints about the grand coalition

The dramatic break between the two would continue to deepen over the coming years. Merz's constant criticism of the Merkel-led grand coalition between CDU/CSU and the Social Democratic Party (SPD) that governed Germany between 2005 and 2009 was seen by many as sour grapes from a political loser.

Consequently, a frustrated and disappointed Merz withdrew from politics in 2009. When he announced his retirement he said he had made the decision in reaction to "the grand coalition's current policies."

Prior to that point, Friedrich Merz had been a powerful political player within the CDU. Trained as an attorney, he had served as the party's parliamentary leader from 2000 until 2002, as well as serving as deputy parliamentary leader from 2002 to 2004. A financial expert, he was considered to be one of the party's most-talented members and in many ways Merkel's political antipode: More business-friendly and conservative but also more provocative and entertaining.

Under fire for demanding 'Leitkultur'

Merz gained attention in parliament for his pointed and sharp-tongued floor speeches, something that further differentiated him from Merkel, who has a reputation for delivering analytical, sleep-inducing lectures.

Merz was well known for seeking to reduce complex issues into the simplest of terms. In 2004, he demanded a tax system where a family could calculate what they owed on the back of a beer coaster. The plan amounted to a 12 percent flat-rate tax on income, with a fixed rate of deduction per member of the household.

Perhaps his most contentious political appeal concerned immigration and what Merz called a "Leitkultur." The term roughly translates as leading, guiding, or even prominent culture. Merz never defined the term himself, but urged the government to incorporate it into migration policy, and to apply more strict rules on immigration and integration. The comments unleashed a wave of public debate and became a battle cry for those opposed to multicultural society. At the time, Merz said that anyone who wanted to live in Germany "must conform to liberal German leading culture."

Merz was vehemently attacked by politicians from the liberal Free Democratic Party (FDP) and the Left Party for the concept. Green Party politicians accused him of racism. Only the conservatives thanked him for his contribution to sociopolitical discourse — and they continue to do so to this day. Although Chancellor Merkel did not agree with Merz's vision, she nevertheless stood by him. The refugee issues that dominate German political debate today were not on the horizon at the time he made the contentious statement, though migration to Germany from the Balkans following the wars in the region in the 1990s was high.

Merkel's exit as a chance to make a comeback

Since leaving parliament, the conservative Christian Democrat has taken on a number of different jobs. In 2010, he managed the privatization of the beleaguered German state bank WestLB. He is also a board member at a number of German businesses, such as the Cologne/Bonn Airport. He has served as chairman of the non-profit Atlantik Brücke (Atlantic Bridge) association, which promotes German-American Atlanticism, since 2009. He is also a member of the Trilateral Commission, which seeks to foster cooperation between Europe, Japan and the US.

In March 2016, Merz was appointed head of the supervisory board at the German branch of BlackRock, the world's largest investment management firm. And in November 2017, he was named honorary Brexit representative for the state of North Rhine-Westphalia.

Now, at 62, Merz is attempting to jump back into politics at the very top having been eclipsed by Merkel in his prime. He would seem to be banking on support from ascendant conservative voices within the party. Should his long-shot candidacy succeed, it would be fair to expect some changes in the CDU.

Germany is at it again: The never-ending debate on what makes the country typically German is a hot topic once more. Other countries, however, are also in search of their cultural identities, like Denmark and Australia. (08.05.2017)