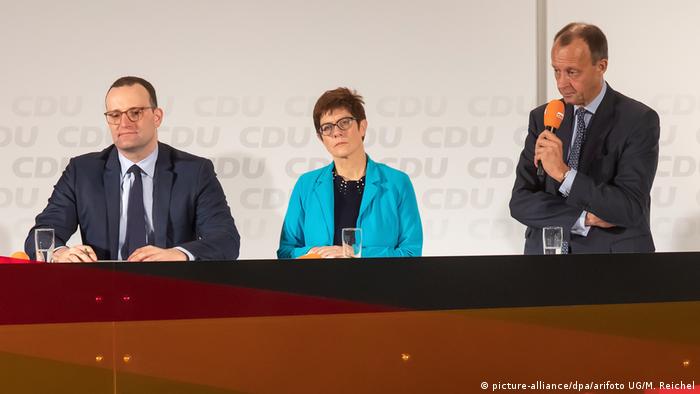 The three leading candidates to take over from Chancellor Angela Merkel as head of the Christian Democratic Union (CDU) presented their cases to a local party meeting of 500 people in Seebach, near Eisenach in Thuringia, on Wednesday night.

It was the third of eight regional meetings for the candidates: Jens Spahn, Friedrich Merz and Annegret Kramp-Karrenbauer.

While the usual topics of education and employment came up, it was the discussion on immigration that sparked controversy.

"If we want to regulate immigration at the European level, then someday we will need a general debate on the fundamental right to asylum," said Merz. "I have long believed that we need to think about it."

Just a few hours earlier, Chancellor Angel Merkel had spoken in the Bundestag in favor of the UN migration and refugee pacts, the first global attempt to set out parameters for managing migration.

Merz acknowledged that the UN pact was a nonbinding treaty but said he was still concerned the German fundamental right to asylum should not create an additional legal right for applicants: "If Germany accedes to this pact, it must be made clear that it does not extend the grounds for asylum before the administrative courts," he said. 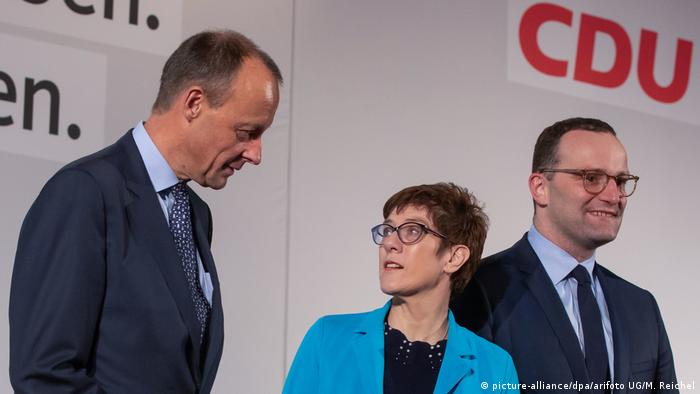 The three hopefuls to become the next CDU party leader are taking part in a series of meetings.

Kramp-Karrenbauer backed Merkel saying: "I believe that this pact brings more advantages than disadvantages for us. It would be worth arguing for. And, of course, to debate it at the CDU party congress."

Spahn said there was a need for international guidelines but raised the concern that a number of countries were not prepared to join the pact.

Austria and some eastern European countries have spoken out against the UN and EU proposals for managing migration. Austria has just lost a case at the European Court of Justice as the Luxembourg court ruled EU states cannot make lower social assistance payments to refugees with temporary residence rights than to their own citizens. Austria is currently working on reforms to make it more difficult for foreigners to obtain state benefits.

Germany is the only country in the world that sets out an individual right to asylum in its constitution, Merz said during the regional CDU conference.

"At some point in the future, we have to hold a major public debate about whether to make a legal reservation in the Basic Law," said Merz. The right to asylum is covered by the so-called "eternity clause" of Germany's Basic Law and is one of the principles that cannot be altered unless a new constitution replaces it.

The populist Alternative for Germany (AfD) has set a political agenda, especially in eastern Germany, against immigration. Recent elections in Bavaria and Hesse saw the party gain at the expense of the CDU and its sister party, the Christian Social Union (CSU).

As they made their pitches, Merz said he would lead the CDU back to election results of "up to 40 percent," as Spahn and Kramp-Karrenbauer sought out familiar faces in the CDU faithful assembled in the hall.

The CDU leadership vote is to be held at a party conference in Hamburg on December 7-8.

Leading Christian Democrats are warning their colleagues not to call Germany's participation in the UN's Global Compact for Migration into question. Jens Spahn and other CDU members have gone rogue on asylum policy. (19.11.2018)