Germany's health minister has called for people without children to pay significantly more into the pension scheme. But others in the government have dismissed the idea as an attempt to punish childless residents. 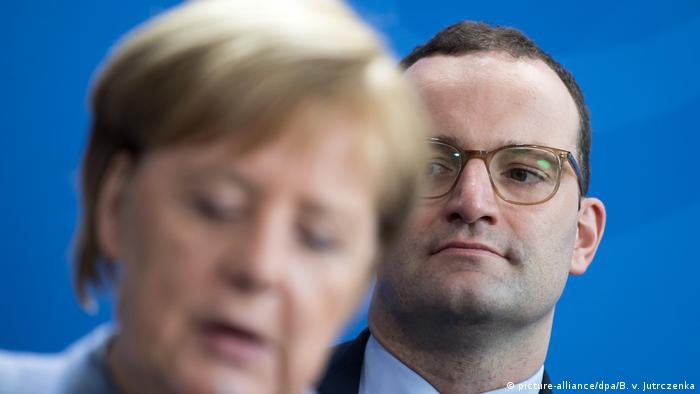 Childless people should be paying much more towards care and pension insurance than those who have started a family, German Health Minister Jens Spahn said Friday.

In a guest commentary for the daily Südwest Presse newspaper, Spahn appealed for a fundamental rethink of the system, describing it as a question of fairness.

"In the pay-as-you-go system, the elderly receive money from young people — even if they are the children of others," he wrote. He added that he spoke as someone who was "childless" and "willing to contribute more financially to the sustainability of the system" at a time when it was in trouble.

Labor Minister Hubertus Heil dismissed the controversial proposal as "more than a weird idea" aimed to "punish people without children, especially since childlessness is in many cases involuntary."

Germany's aging population and the retirement of post-war baby boomers has led to a mounting burden on health and social systems.

There is currently no difference in pension payments, but childless people between the ages of 23 and 64 already pay 0.25 percentage points more towards long-term care insurance than insured individuals with children.

Spahn, who is one of the three frontrunners to replace Chancellor Angela Merkel as leader of the conservative Christian Democratic Union (CDU), said that was how it should be. But he said the amount could "be more."

"Parents raise future contributors and secure the system for the future," the minister wrote.

Read more: Old-age poverty risk in Germany on the rise

'Fair for all generations'

Spahn said the government needed to make the system "fair for all generations" now to avoid a situation where the shrinking number of young people over the next decade "find ways to shirk or evade the financial burden."

He also called for an honest debate about "how we remain a human society, how we maintain our social institutions, if every third person in Germany is over 60 years old — and less than a fifth are younger than 20?"

Labor Minister Heil, who is from the center-left Social Democrats (SPD), said the support for families could come from elsewhere: "If we want to strengthen the financial foundation of pension insurance, we should be thinking about a higher pension insurance contribution for very rich people."

Also on Friday, Germany's Bundestag approved a multi-billion-euro package to tackle staff shortages in the aged care sector, where there are currently some 35,000 vacant positions.