Old-age poverty risk in Germany on the rise | Business | Economy and finance news from a German perspective | DW | 26.06.2017

An increasing number of old people in Germany face the risk of being stuck in poverty in the coming years, says a new study. Single women, low-qualified workers and long-term unemployed are among those starkly affected. 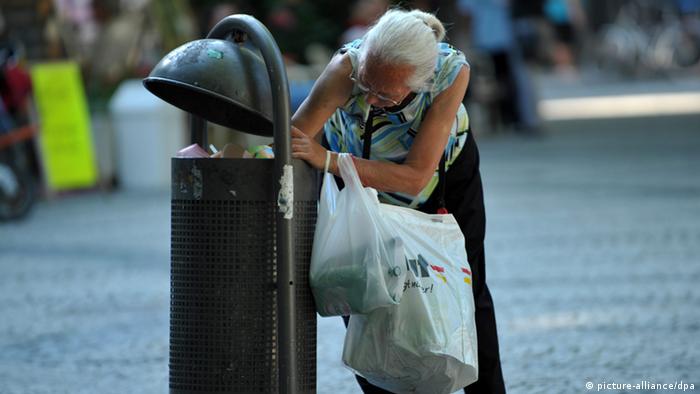 The changes taking place in the German labor market in favor of temporary jobs, contract workers and precarious working conditions in the low-wage sector, among other things, are raising the danger that more and more old people in Germany will find themselves in poverty post retirement, concludes a new study released on Monday by the Germany-based Bertelsmann Foundation.

It predicts old-age poverty in Germany would soar from 16 per cent in 2015 to 20 per cent by 2036, meaning one in every five pensioners in the country could face severe financial hardship.

Pensioners in Germany are considered to be at risk of poverty when their monthly net income amounts to less than 958 euros ($1,072).

Single women, low-qualified workers and long-term unemployed people face the highest risk of ending up in poverty in old age. Among the women, the study estimates the poverty rate to rise from about 16 per cent in 2015 to 28 per cent in 2036.

That means the risk of poverty for these women is four times higher than the national average.

"We need further reforms to retirement," said Aart De Geus, head of the Bertelsmann Foundation, pointing out that there could be serious problems when the babyboomer generation starts to retire. "In order to make our retirement system future-proof, we will have to adapt it to changing conditions in the labor market," he noted in the report.

Besides the changing labor market dynamics, the study authors also blame the continuing decline in pension payments for impoverishing the old. They cite the transforming demographic conditions and pension policies, underlining that the private pension plans recommended by the government do not offer a comprehensive solution to the issue.

A partial economic recovery in European Union member countries has not translated into fewer people living in poverty despite them having full-time jobs, a new study has shown. Germany is no exception. (14.11.2016)

"The current reform debates often go past reality and do not tackle the fundamental causes of old-age poverty," said Christof Schiller, a labor market expert at the foundation. "The discussions surrounding the stabilization of the pension levels are not of much help to the high-risk groups, whose low wages mean many of them already face poor living conditions even during their working years."

The results of the study are in many respects in line with those presented in an old-age security report published by the German federal government last year.

In that document, the government called on the public to make more provision for private pension plans. But the Bertelsmann study concludes that this is by no means sufficient.

The study suggests that reforms to the pension system must focus more on high-risk groups and take into account the changing labor market landscape as well as the situation in the financial markets.

For the study, the German Institute for Economic Research (DIW) and the Center for European Economic Research (ZEW), two Germany-based think tanks, did simulations using a representative set of household data to calculate people's old-age income from various retirement arrangements.