German poverty rising - despite economic growth | Germany | News and in-depth reporting from Berlin and beyond | DW | 02.03.2017

A new report has shown the poverty rate breaking new records in Germany, even as GDP continues to grow. While charities call for better redistribution, some economists say factors like immigration also play a role.

Numbers from a forthcoming government study indicate that more and more Germans are either very rich or very poor. Are the state's income equity programs failing its citizens, or are new solutions needed? (14.12.2016)

German food banks are increasingly overstretched as demand rises. The number of pantries rose sharply after the Hartz IV reductions to unemployment benefit plans were implemented in 2005. (16.01.2017)

Newspaper reports say that the labor ministry deleted potentially controversial parts of a forthcoming report on poverty and wealth in Germany. The news casts doubt on the report's credibility. (15.12.2016)

A host of major German charities have called for a "rigorous change of course" in the government's tax and finance policies to fight growing poverty, in a major new report released Thursday.

The poverty rate in Germany reached the new record level of 15.7 percent in 2015, according to the report, entitled "Human dignity is a human right," by an alliance of organizations called the Paritätische Gesamtverband.

German Gross Domestic Product had also risen at the same time, by 1.7 percent on the previous year, which prompted the organization to demand the government pursue "determined action" in labor market policy, social housing, education, and the extension of social services.

"Growth is what the economy produces, but for years now that hasn't reached the poor population," said Erika Biehn, deputy chairwoman of one of the charities that presented the report in Berlin. "Because they don't have the right education - I had the same experience myself. I was poor, my mother was poor, so I had it harder in school. It's been the same problem for the past 50 years."

The solution to the problem, according to Biehn, has also not changed over the decades: "Smaller school classes, employing more teachers, and making sure that children from poorer social groups are really supported," she told DW.

She said that while growing GDP might help to create new jobs, many of those jobs are so poorly paid that they merely cause further erosion of middle class living standards. "It's also that many jobs are being digitalized, so that people aren't needed anymore," Biehn said. 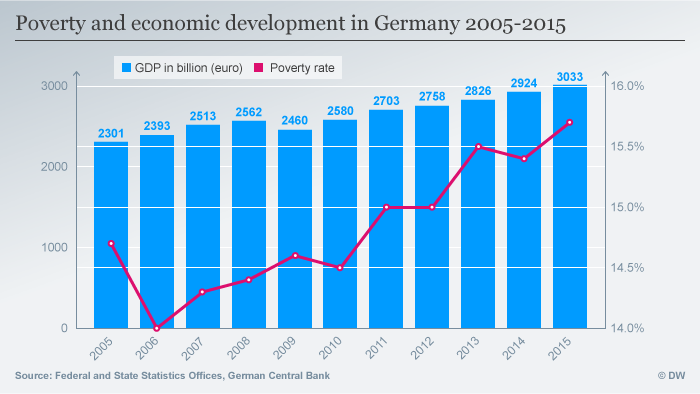 But some economists don't agree with this, and don't believe that poverty is growing. Christoph Schröder, senior researcher at the Cologne Institute for Economic Research (IW), didn't agree with the report's appraisal, not least because the recent rise in poverty was "mainly down to immigration."

"Since 2005, the high point in recent unemployment, we've seen a practical stability in the poverty rate," Schröder told DW. "But if you take out the immigration factor, we hardly have any rise in the income poverty rate at all."

Much depends on how poverty is defined. The Paritätische Gesamtverband,along with Germany's official statistics office, says a poor person is someone who earns 60 percent or less of the country's median income. The IW, however, describes this as too narrow a definition, and argues that people's actual living circumstances need to be taken into account. The median calculation is, according to Schröder, "a purely relative term - simply a convention. If everyone earned twice as much, then the poverty rate would be equally high."

"Of course, if there's a high rate of people with a relatively low income, then there is a social problem that should be taken seriously," he added. "But I wouldn't put that in the same category as poverty. There is always the question: what defines a minimum living standard - is it really only proportional to income?" 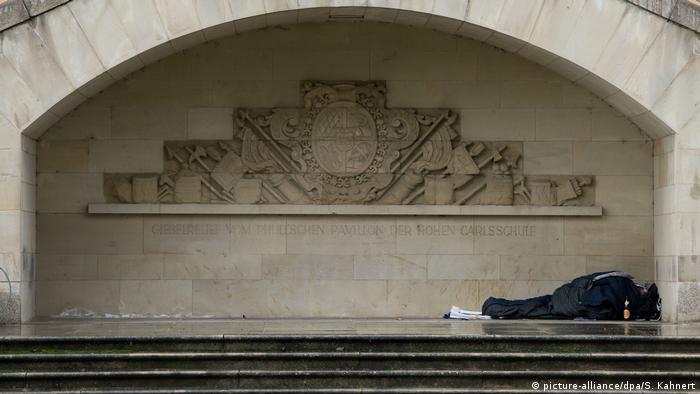 But the Paritätische Gesamtverband takes issue with what its head Ulrich Schneider calls an attempt to "reduce poverty to misery," by focusing only on the lack of basic needs such as food, clothing and an assortment of consumer items that define living standards, such as a TV.

This, according to Schneider, amounts to "an attack on an inclusive society" and Germany's constitutionally guaranteed respect for human dignity - which means participation in society.

"Poverty is when people, because of an insufficient income, can simply no longer take part in society ... and are forced to withdraw, and are de facto marginalized ... into sub- or parallel societies," Schneider wrote in his statement introducing Thursday's report.

Economic institutes like IW also criticize the fact that certain social groups, such as students, are often included in the standard definition of poverty even though their living standards are relatively high. In other words, the poverty rate is artificially inflated.

Read all you need to know about the German elections

Lebanon is in the grip of a massive economic crisis that has prompted banks to impose draconian restrictions on withdrawals. People desperate to get hold of their savings have now taken drastic action. Millions are unable to pay for basic needs.

Ukraine's central bank has been de facto printing money to pay its troops, but the measure is unsustainable. More international support is vital, but how much new cash could be raised domestically?