The German government has announced 13,000 more jobs for hospitals and care homes, but there is still a shortage of qualified medical staff. DW spent a shift with two nurses to learn more about the care sector crisis. 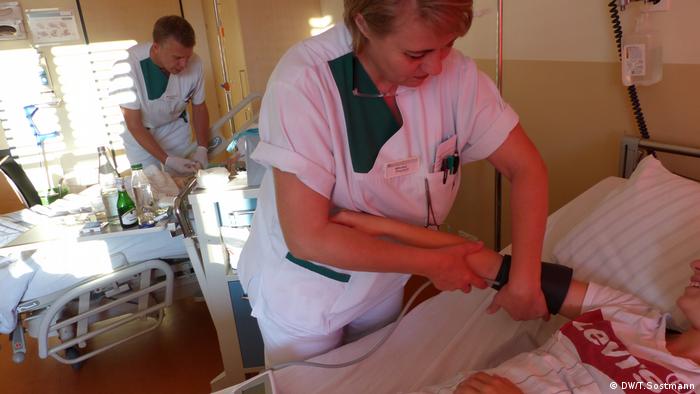 "110/70 — you have normal blood pressure, that's good," says nurse Valentina. She makes a note, inquires how the patient is feeling and then rushes off to see the next person. "We have to check on 23 patients today before the doctor tends to them at eight," Valentina explains. Often, she admits, that leaves little time to chat.

The 48-year-old Oleg Busch, who heads the surgical ward at Helios hospital in the western German city of Siegburg, also works as a nurse. He's been doing so for over 20 years now. Oleg likes his job, even though it can be very stressful at times.

Germany faces a massive lack of medical care personnel, which means many hospitals are overburdened. Nurses complain that they are too short-staffed to properly tend to their patients. Currently, roughly 1 million people work in the country's nursing industry. It is projected that 3 million nurses will be needed by 2060, given Germany's aging population. In late 2015, there were 2.9 million individuals in need of care — by 2030, this figure is expected to rise to 4.1 million. 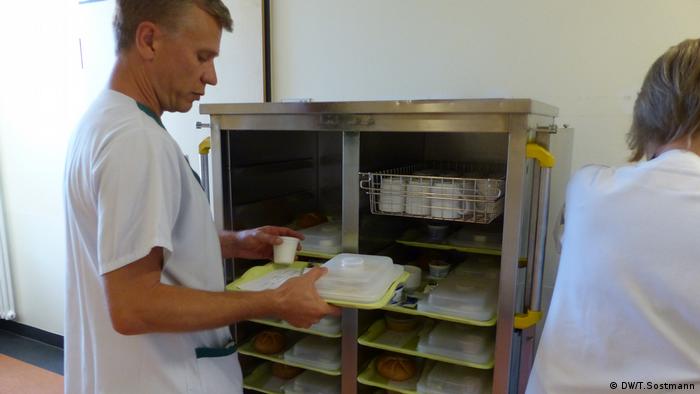 With 23 patients to tend to before the doctors make their rounds, Busch has his work cut out for him

Busch believes Germany is in dire need of additional care personnel, and his hospital is no exception. "Ideally, we should have three certified care-givers working the morning shift, just like today," he says. However, Busch concedes that such ideal staffing conditions are difficult to achieve, as there simply aren't enough nurses.

Patients are always his absolute priority, which can sometimes mean having to put bathroom and meal breaks on hold. Sometimes, there is not even enough time to complete all the patient paperwork, and it has to be postponed.

Christina Körner of the Johanniter Education Center in Bonn says this plan would merely relieve the symptoms rather than address the underlying problem. Körner, who is a trained nurse, is critical of the fact that the workload continues to increase in Germany's health care sector, but staff numbers aren't keeping up. "Their job is getting more and more demanding," she says. "I can say this because I have 20 years experience working in the sector." 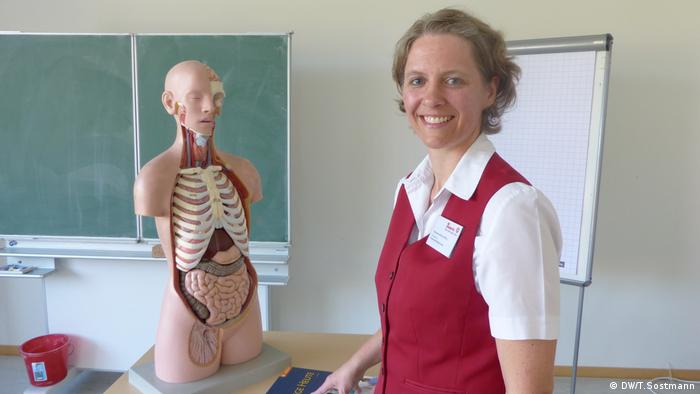 Körner does not believe that hiring foreign care personnel to compensate for staff shortages is a good idea in the long term. People from other cultures need time to integrate into German society she says, stressing that there is not enough staff capacity to help foreign workers settle in.

Nurses fed up with heavy workload

Despite the hard work, Busch says he likes being a nurse. "I enjoy working with people and helping them," he explains, adding that the rewarding work sometimes helps him forget about the inconveniences and little annoyances that come with the job.

Busch believes that nursing is only for people who deeply care about working with others. "Anyone who says they want to be a nurse because the money is good is in the wrong job. Here, the patient is the focus. Anyone who enjoys doing that will always have a future," he says while putting together medical records for the doctor — several patients are set to undergo surgery today.

Körner sees a future for the nursing industry in Germany. After completing vocational training, she studied health and care education. In 2016, she became a member of the executive board of the German Nurses Association. "I believe it's almost inevitable that the caregiver sector will develop and progress," Körner says. "There are so many different education programs on offer, some for people with prior work experience and regular university degrees, too." 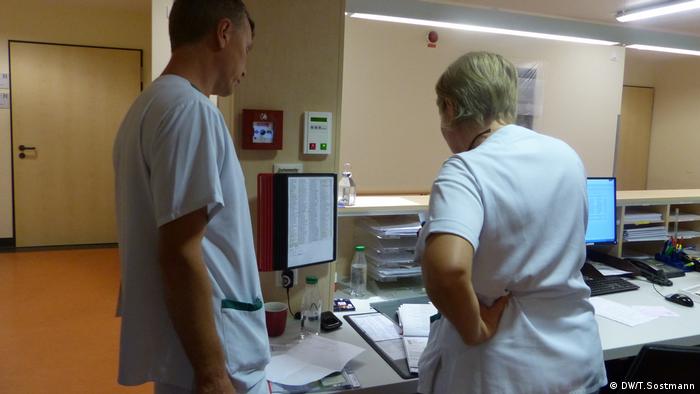 Being a nurse can often require doing a lot of paperwork

Establishing an appropriate framework to make this vocation more attractive is key, believes Körner. "We have grown used to the current situation and keep telling ourselves 'we will manage somehow,'" Körner says. However, she admits that Germany's caregivers are becoming increasingly discontent with the heavy workload. "Maybe now would be a good time for the new government to tackle the issue and initiate a public debate on the matter," she says.

As Busch's shift comes to an end, he is preparing the hand-over with his colleagues. It entails telling the late night staff how the patients are doing. What matters most to him, says Busch, is knowing he has fulfilled all his daily tasks. Alas, often he is forced to work extra hours to get everything done. "The conditions need to be right, things are totally different when we are not short-staffed," he says. As Busch closes the file, he bids farewell to his colleagues. "This is about human lives," he says. "And that requires having reliable and trustworthy caregivers."