New government figures show that tens of thousands of professional care jobs in Germany are unfilled. One opposition politician has called the government's existing plan to tackle the shortfall "a joke." 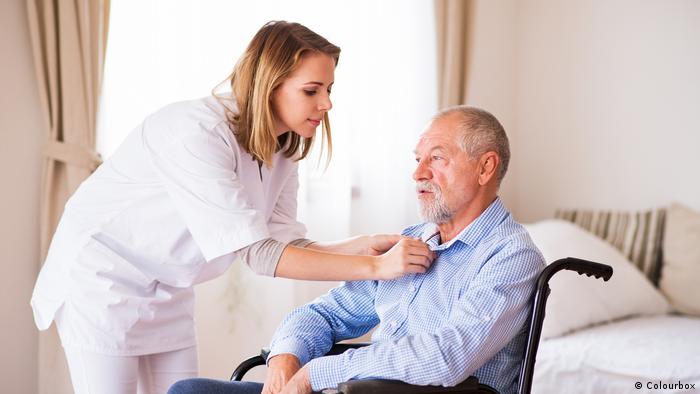 Opposition politicians have said the government's plan to improve Germany's professional care industry is insufficient after it was revealed that some 36,000 jobs are unfilled.

The government's figures published on Wednesday also showed that the number of professional carers without a job was far lower than the total number of vacant positions.

Merkel's conservatives (CDU/CSU) and the center-left Social Democratic Party (SPD) had pledged in their coalition government agreement to improve working conditions in the care industry and finance 8,000 more care jobs.

The SPD's spokeswoman for care policy, Heike Baehrens, said the government's plan was "a realistic first step" to tackle the shortages and would be followed by other initiatives.

But the Green Party's care policy spokeswoman, Kordula Schulz-Asche, told the Berliner Zeitung newspaper the government's plan was "a bad joke" in light of the new vacancy statistics.

Lack of carers - who will look after the elderly?

The Greens' parliamentary chief Katrin Göring-Eckhardt said the care industry was on the brink of a "serious crisis" and called on the government to introduce a "emergency program" to finance 50,000 new jobs.

The Left Party also criticized the government's plan, with care policy spokeswoman Pia Zimmermann blaming the previous CDU/CSU/SPD government for bad working conditions in the industry that had made professional care work "unattractive."

The chair of the German Foundation for the Protection of Patients said hospitals and elderly care homes were primarily responsible for the problem: "It is not acceptable that hospitals and care homes have made savings at the expense of professional carers while at the same time increasing their profits," said Eugen Brysch.

Read more: Should we use robots to care for the elderly?

The director of the German Institute of Applied Nursing Research questioned the government's vacancy figures: "According to our data there are 38,000 unfilled positions in elderly care homes and ambulance and outpatient services alone," Frank Weidner told the epd news agency, adding: "We should assume there are around 50,000 vacancies."

Made in Germany - The Economics of healthcare