Angela Merkel takes her leave as conservative party head | Germany| News and in-depth reporting from Berlin and beyond | DW | 07.12.2018

In her final speech as party chair at the CDU conference in Hamburg, Angela Merkel stressed togetherness and subtly endorsed a potential successor. The race to replace her has gone to a second-round runoff vote.

No matter how divided the Christian Democratic Union (CDU) may be over Chancellor Angela Merkel, it would be little short of churlish not to recognize the worth of her long tenure as party chairwoman. Most party heads don't serve anywhere near the 18 years that Merkel has steered the CDU.

Merkel received a standing ovation when she opened the conference in Hamburg, at which delegates will elect her successor as party head. And she used her keynote address to remind them of how much the party has changed – in her view for the better – during her long reign.

Merkel began her address by drawing attention to the motto of the party conference "Zusammenführen. Und zusammen führen" (Bring together and lead together). It was an implicit appeal for party solidarity despite what many expected to be a neck-and-neck race between the pro-Merkmel centrist Annegret Kramp-Karrenbauer and the conservative Merkel critic Friedrich Merz.

Merkel recalled the dire state of the CDU, which was in the midst of a party financing scandal, when she took over in 2000.

"Our CDU is a different one than in 2000, and that is good," Merkel said, adding that the party couldn't afford to live in the past but needed to look forward to the future. 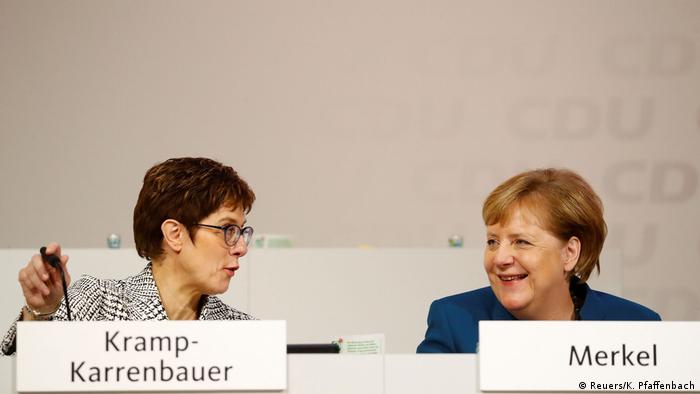 A subtle endorsement for one potential successor

That statement could be read as a sly dig at Merz, who has called for the party to return to past traditions and attitudes.

It is no secret that Merkel favors Kramp-Karrenbauer as her successor, and she didn't forget to mention the CDU's victory in the Saarland regional election of March 2017 under Kramp-Karrenbauer's leadership.

And she stressed conservative victories in two other regional elections as well as in the national vote in 2017 in which she herself was re-elected as chancellor. Her message – despite slumping public support, conservatives can prevail if the party stays together. Under the leadership of a moderate, she might have been tempted to add.

She also did not neglect to defend her most controversial stance within the party, her welcoming stance toward migrants, saying Germany had responded to a "humanitarian catastrophe." But she also acknowledged that it had caused bitter internal fighting.

"How could it have been different?" she asked. "We're a family after all." 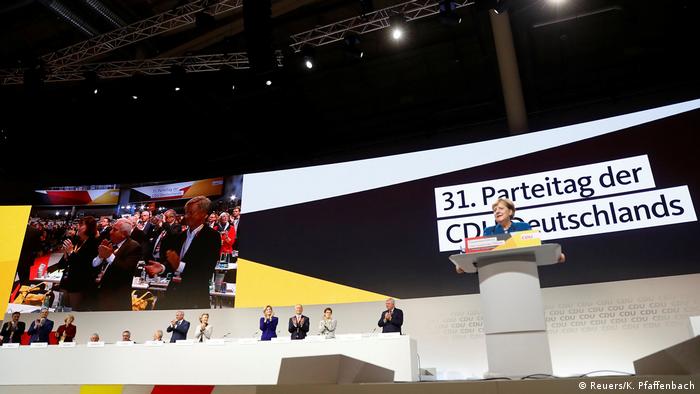 Lengthy but not frenetic applause

She moved on to discuss her decision to step down as party chair, which came after disappointing regional election results in Bavaria and Hesse in 2018. She said the conference gave the party an opportunity to ready itself for "the time after me."

"In this way, we can lay the groundwork for the future," Merkel said. "I wasn't born chancellor or party chair. I always wanted to bear my offices with dignity and to give them up with dignity."

She also sought to enlist a bit of national pathos, citing lines from the German national anthem and naming each one of Germany's 16 federal states. And she thanked her fellow Christian Democrats for allowing her to serve as their leader.

"It was an honor," Merkel said, concluding her speech. "Thank you."

That drew a standing ovation, and many delegates held up orange signs reading "Thanks, boss!" But otherwise this was a classic Merkel speech: cool, calm, collected and somewhat short on specific content. The applause continued for almost 10 minutes but was hardly frenetic or thunderous.

It was a sign that despite her many years at the helm, the centrist, pragmatic Merkel remained something of an anomaly in the traditionalist and traditionally male-dominated Christian Democratic Union.