Germany's largest party has elected Chancellor Merkel's close ally Annegret Kramp-Karrenbauer as its next leader. The party now desperately needs her to shake it up, writes DW Editor-in-Chief Ines Pohl. 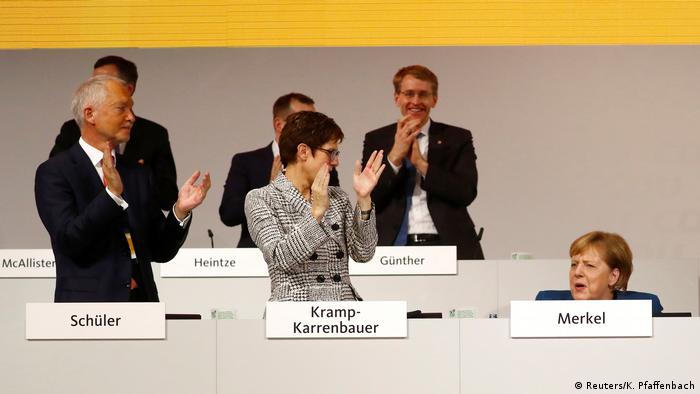 An election for the leading position of a German party usually generates little or no interest abroad. But not this time. In recent days, major newspapers such as The New York Times reported more prominently on the Christian Democratic Union (CDU) party conference than on the funeral of former US President George H. W. Bush.

The world was watching. Across the globe, television stations went into breaking news mode when the next CDU leader was announced. And the reason for the unusual attention has a name: Angela Merkel.

For many people, the German chancellor is the world's most important political figure. A world in which the machismo of Russian President Vladimir Putin, US President Donald Trump, and Turkish President Recep Tayyip Erdogan rages unabated.

Merkel has been regarded by many as the voice of reason; the last bastion of balance in times that are deeply divided and characterized by dangerously rising nationalism.

Within her own country, however, Merkel's splendor faded. In state elections, her party endured one defeat after another, and the voices of critics within the party grew so loud that Merkel had no choice but to free up the party leadership.

When that announcement came at the end of October, the battle to succeed her kicked off. Even though her term in office will not end for another two and a half years, it was clear that she would be unable to continue governing if the party elected one of her vocal opponents to the top position.

The man Merkel drove out of politics eight years ago, Friedrich Merz, lost his bid to exact his long-awaited revenge by a mere 35 votes out of a total of 1001. Long a critic of Merkel, he saw his chance at an eleventh-hour retribution — supported by all those men whom Merkel had slighted, thwarted or politically annihilated in her long career.

After a long, suspenseful day that had begun with Merkel's highly emotional speech, the result was very close. The winner was Annegret Kramp-Karrenbauer.

In the end, by choosing Angela Merkel's favorite, the party conference also voted for the chancellor to serve out her last term in office — provided that its junior coalition partner, the Social Democrats, does not defect.

Domestically, it will be interesting to observe whether Kramp-Karrenbauer will succeed in healing the party soul, unifying the various camps, and giving the jolt that not just the CDU, but also Germany, so desperately need. Such a shake-up is vital so that, in the next election for chancellor, the country will not succumb to the fatigue following a likely 16 years of Merkel at the helm.

At the core lie the questions of whether Kramp-Karrenbauer will succeed in stepping out of the shadow of her mentor and predecessor; whether she will learn how to stand on her own feet while also gaining international experience. All this will be needed to make her a convincing candidate for chancellor.

All these are the questions of the future.

For the time being, the CDU now has not only one woman at the top, but two.