The German government says it supports a call by the French president for reforming and bolstering the European Union. But some say Berlin itself needs to show more initiative.

German political leaders have reacted positively to a raft of suggestions by French President Emmanuel Macron for strengthening the European Union.

In an official statement by Chancellor Angela Merkel's government to Reuters news agency, a spokesperson said: "It's important ahead of the European election (in May) for pro-European forces to present their ideas. The German government supports the lively discussion about the orientation of the European Union." 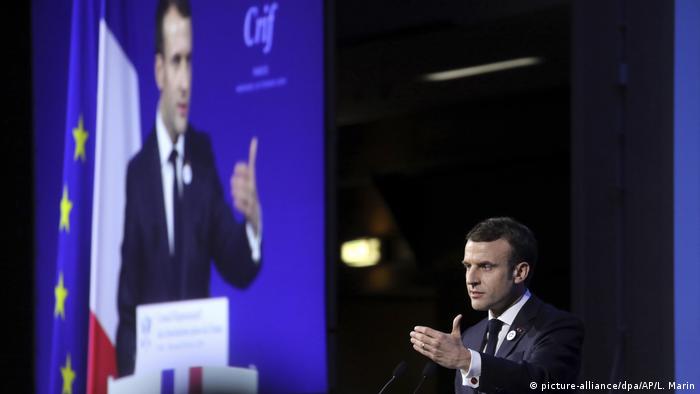 On Tuesday, Macron, who has come under fire in France by yellow-vest protesters and others, presented ideas for a "European renaissance" in an article published in newspapers throughout Europe and online. Among his wide-ranging suggestions were enhanced protection against hate speech, greater control of EU borders and immigration, and a nationally adjusted European minimum wage — ideas that went down well with most German politicians.

The Social Democratic Party's (SPD) lead candidate in the European election, Katharina Barley — who is both a UK and German citizen — tweeted in French: "Dear Emmanuel Macron, thank you for this initiative. We need to come together as Europeans and make Europe strong."

"Macron stresses Europe's commonalities, significance and strength," Beer wrote on Twitter. "Strong partners and friends are crucial for a European renaissance. (This is) an important initiative for necessary reforms to combat scaremongers on the right and left."

Critics: 'Berlin should do more'

Some of those who expressed support for Macron's ideas criticized the German government for failing to take the lead on the EU. While Merkel's government has said it favors a strong EU, in the past it has been hesitant to back Macron's suggestions for greater EU involvement in economic and fiscal issues.

The conservative chairman of the Bundestag's foreign affairs commission, Norbert Röttgen, tweeted: "We need more Europe in the right places rather than less. We need to stand up more for Europe, the source of our freedom, security and prosperity. Macron has shown the way. How about some proposals now from Germany?"

Former German Foreign Minister Sigmar Gabriel observed: "Macron is right. Europe has to go back to being more than a soulless common market. Hopefully this time the German government will finally support his proposals."

And the speaker of the Greens in the European parliament, Sven Giegold, also took Chancellor Angela Merkel's government to task, tweeting, "Above all this is an instance of Germany coming up short and not of France going it alone."

AfD: Macron should worry about France

But not all politicians in Germany sang Macron's praises. The far-right nationalist Alternative for Germany (AfD) doesn't want to see Brussels given any more power.

"It's not nationalists who endanger Europe but the EU's relentless mania for control and bureaucracy," tweeted AfD co-leader Alexander Gauland.

In a statement, Gauland added: "Concerning Macron's demand for a Europe-wide basic level of social security, it's clear who will pay: Germany. We don't need constant suggestions about how to expand the EU, but how to scale it back to its sensible core as an economic union. Then Mr. Macron will finally have time again to solve France's problems."

In a statement to Deutsche Welle, Green party foreign policy expert Omid Nouripour said, "In many places, Macron's proposals aren't fully worked out and don't contribute toward increasing EU unity, for example, when he connects the Schengen Agreement and acceptance of refugees."

Opinion: Emmanuel Macron takes the EU bull by the horns

In a slow European Union election campaign, France's president has taken the initiative by calling for sweeping reforms to the bloc. A fresh burst of energy is just what the EU needs, writes DW's Bernd Riegert. (05.03.2019)

Europe today fears Germany's economic strength rather than its military might, historian Andeas Rödder tells DW. At the same time, Germany is meant to lead the EU: a dilemma for all sides. (20.11.2018)