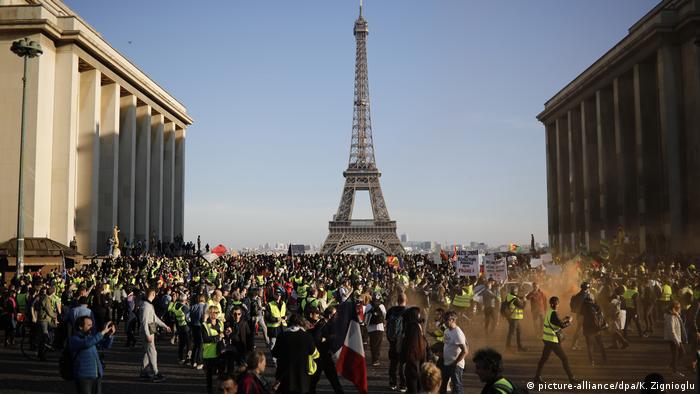 Thousands of people marched on Saturday in Paris and other French cities for a 15th straight weekend of yellow vest protests in which dozens of people were arrested.

Five separate demonstrations in the capital drew 5,800 people, the interior ministry said, while there were around 46,600 protesters nationwide. Some 41,500 people joined protests across the country last week.

The protests — named after the fluorescent jackets French motorists must carry in their vehicles for emergencies — have generally become smaller since December when there was vandalism and looting in Paris.

Protest organizers have sought to keep momentum behind an increasingly splintered movement and bouts of violence that threatened to tarnish its image.

Originally launched in mid-November against rising fuel prices and the cost of living, the yellow vest protests have since expanded to a broader movement against President Emmanuel Macron's economic policies.

Macron has responded to the protests by rolling back the fuel tax hike and holding debates where officials listen to the public.

Police said 28 people were arrested in Paris, where protests were mostly peaceful. As they ended, clashes broke out and police fired tear gas at protesters on the Place du Trocadero across the River Seine from the Eiffel Tower.

Another 18 people were also arrested in the central city of Clermont-Ferrand, where 2,500 participated in protests that led to clashes with police. Weapons including baseball bats and gas pistols were among the items seized, police said.

Politicians in Germany have bowed to French pressure to cut down trees in Berlin. The trees, which blocked a sculpture given to the city by France, are doomed. Is this what it takes for good neighborly relations? (22.02.2019)