With EU polls drawing closer, Germany's SPD has strongly backed Justice Minister Katarina Barley as its top candidate for the European Parliament. Barley is a dual British-German national with a French law degree. 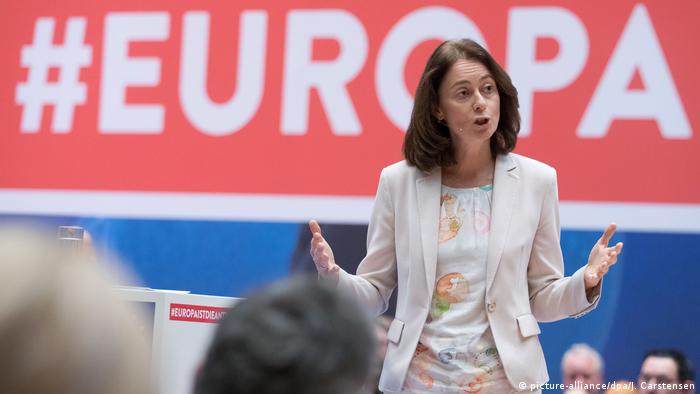 Germany's Justice Minister Katarina Barley secured 99 percent support among delegates of the center-left SPD party in her bid to lead the party list in the upcoming European Parliament vote.

The 50-year-old is a dual British and German national and describes herself as "European to the tips of my toes."

Addressing the delegates on Sunday, Barley called for a pan-European minimum wage and an EU-wide social security system.

"We are at a crossroads," she added, commenting on the rise of populism and the issues surrounding Brexit.

"We want to offer a new union, a new social contract, to the people."

Barley was born in Cologne to a German mother and a British father. At the time, her father worked for the English-language department of Germany's foreign broadcaster DW. Barley studied in Paris and graduated in French law in 1990 and later obtained advanced law degrees in Germany.

She was named Germany's justice minister in March 2018.

For decades, Germany's SPD party dominated the leftist political spectrum in the country and wrestled with CDU/CSU conservatives for the control of the Chancellery. Recently, however, the party suffered severe election losses and is now hovering at around 15 percent support, compared to the conservatives' 30 percent. The polls show that the Green party is already ahead of the SPD, with the populist AFD hot on their heels.

As the SPD's top candidate for the EU election, Barley will represent the bloc of Europe's Social Democratic parties under Frans Timmermans, who was endorsed as the bloc's leading candidate on Saturday.

Timmermans is set to face off against German conservative Manfred Weber at the election in May, with both of them vying to succeed European Commission President Jean-Claude Juncker.

US midterm elections 2018: The European perspective