A new poll has called into question the SPD's ability to govern alongside Chancellor Angela Merkel's conservatives. Nevertheless, SPD voters see a grand coalition deal as the best way forward for their party. 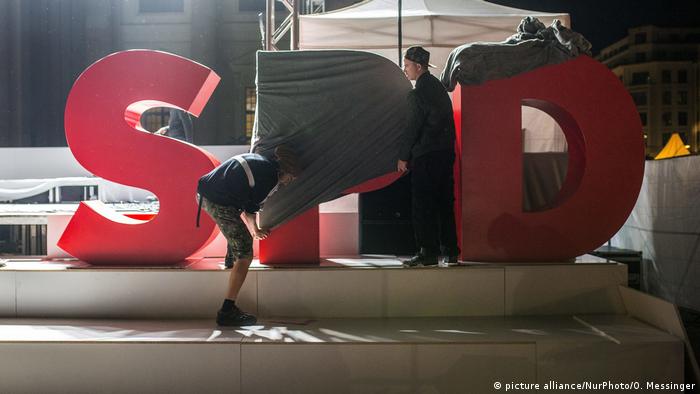 Germany's Social Democrats (SPD) were presented with a mixed bag of results in Thursday's DeutschlandTrend poll.

While a majority of Germans (57 percent) said they believe the center-left party continues to understand the cares and concerns of the country's citizens, most people don't think the SPD remains united or credible.

Worse for the party, however, is that almost 60 percent of voters said they do not think the SPD is fit for government.

The poll, which was commissioned by German broadcaster ARD, comes just days before the party announces the result of the ballot vote on whether party members accept the grand coalition deal the leadership hammered out with Merkel's conservatives last month.

By contrast, three-quarters of voters said they thought that Chancellor Angela Merkel's conservative bloc was fit to govern Germany. This faith in the center-right comes despite its supposedly not understanding the concerns of German citizens, according to 55 percent of those surveyed. 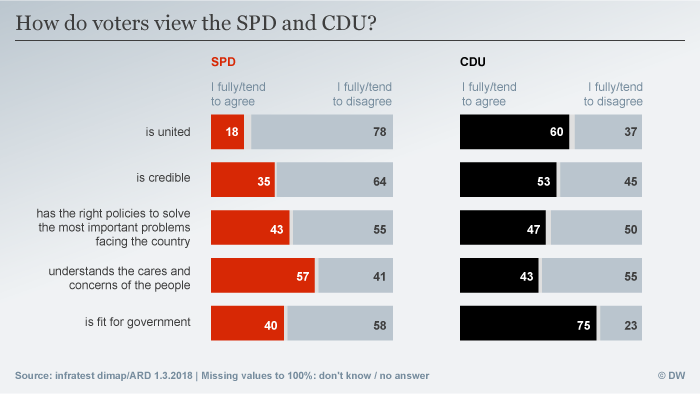 Some good news for the SPD

The DeutschlandTrend poll also recorded a modest hike in support for the SPD, up 2 points to 18 percent.

Two weeks ago, a survey found that support for the SPD had plunged to a record low of 16 percent.

Read more: Opinion: Is this the end of Germany's SPD?

The conservative Christian parties made up of Merkel's Christian Democrats (CDU) and Bavaria's Christian Social Union (CSU) also enjoyed a 1-point increase, bringing it up to 34 percent, while support for the far-right Alternative for Germany (AfD) and Free Democrats remained unchanged at 15 and 9 percent, respectively.The Greens and Left party suffered minor losses. 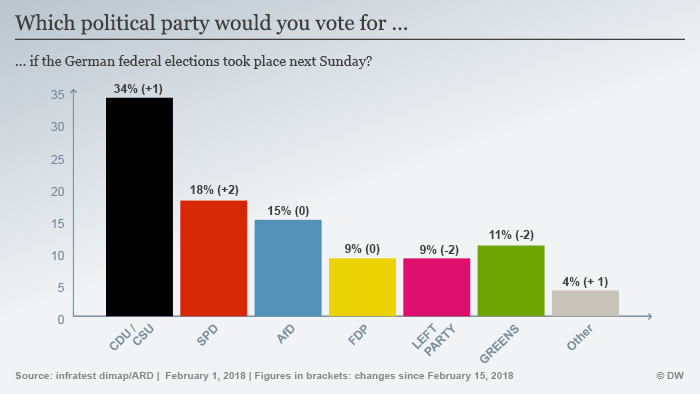 The small rise in support for the CDU/CSU was tied together with the modest hike in popularity for Merkel. 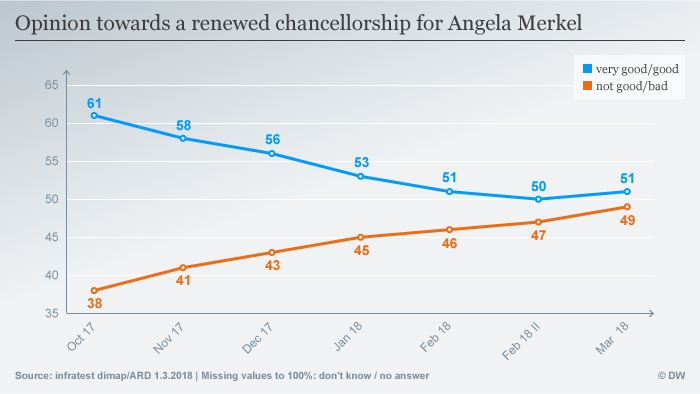 The SPD leadership will also be relieved to see that some two-thirds of members are now in favor of joining a coalition with the CDU and CSU.

Sixty-six percent of SPD voters said they support the creation of another coalition with Merkel's conservatives, up a staggering 15 points from two weeks ago. This increase was likely spurred by the SPD's success in claiming three major portfolios during the final day of coalition negotiations: finance, foreign affairs and labor.

The party will on Sunday morning announce the result of the ballot vote on whether to accept the coalition deal.

Support for another Merkel-led coalition was also high among the conservative voters, with 70 percent backing the new coalition deal. However, a majority of German voters (52 percent) still have a negative view of a new grand coalition. 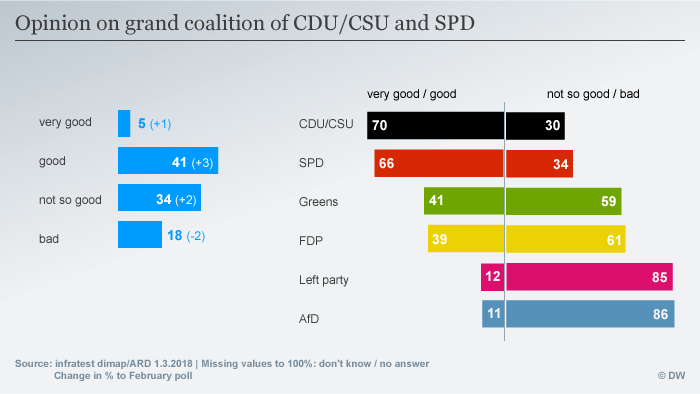 Should SPD members reject the party's coalition deal with the CDU/CSU, Germany faces one of two choices. Either, Merkel forms a minority government or Germany will be forced to hold early elections.

The DeutschlandTrend survey showed that most Germans (52 percent) would still prefer fresh elections, although that lead has narrowed since last month and only remains slightly ahead because of AfD voters. 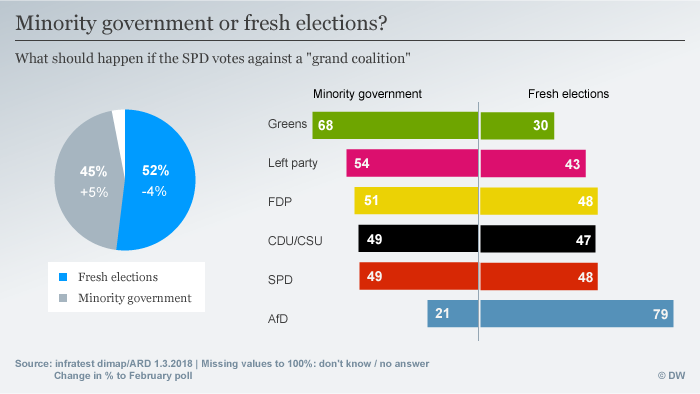 Although the AfD appears destined to become the main opposition party to the grand coalition, it remains isolated on the far-right and is unlikely to see any of its preferred policies come into force under the next government.