Merkel-led coalition: Decisive times as SPD members vote on pact | Germany | News and in-depth reporting from Berlin and beyond | DW | 19.02.2018

More than 450,000 Social Democratic party members will decide whether to enter another grand coalition under Chancellor Angela Merkel. Past referendums have been formalities, but this time the result is far from assured. 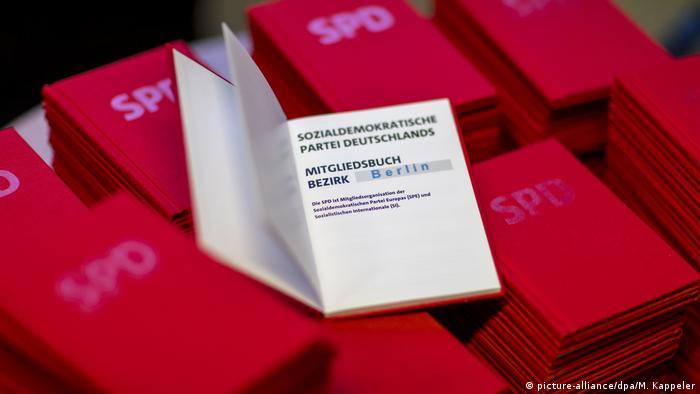 The 463,723 party members of the Social Democrats (SPD) have particularly important pieces of mail in their letterboxes — ballots asking them to decide on the coalition deal the SPD leadership hammered out with Chancellor Merkel's conservatives earlier this month.

The SPD rank-and-file have until March 2 to submit their votes, and the result is expected to be announced soon thereafter.

The vote is an all-or-nothing affair. If the SPD membership gives the thumbs up, Germany finally gets a new government — six months after the national election last September. If the members say no, the result will either be fresh elections or an uneasy attempt by Merkel to lead a minority government — in any case, further political uncertainty.

Merkel's Christian Democratic Union (CDU) will convene for a party conference in Berlin on February 26, where delegates will be asked to approve the coalition. A clear majority for the deal is expected. Yet SPD approval is not a given. In the past, the SPD membership has approved deals with Merkel by wide margins, but this vote is likely to be very tight.

No rubber stamps this time

There have been two grand coalitions between the conservatives and the SPD, but neither was even remotely as problematic as this one.

In 2005, delegates to a special SPD conference approved the first Merkel government by a wide margin. The coalition took power two months after the national election. In 2013, SPD members ratified a second coalition with Merkel, with 76 percent of respondents voting yes.

The SPD leadership can only dream of a result like that in 2018. At a special SPD conference in January, only 60 percent of delegates voted to authorize their leaders to hold coalition talks with the conservatives. 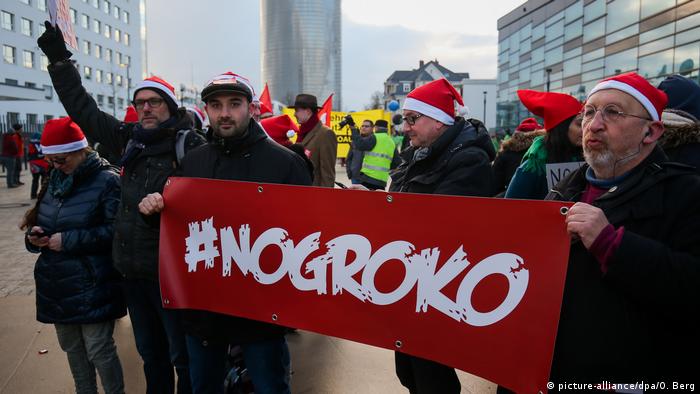 Opposition to the grand coalition, or GroKO, has been fierce and isn't relenting

Former Party Chairman Martin Schulz had to step down after flip-flopping on the grand coalition and trying to claim the post of foreign minister. The newly designated chairwoman Andrea Nahles and acting party leader Olaf Schulz are struggling to assert their authority with the SPD dropping to historic lows of 16 percent in opinion polls.

Meanwhile, the SPD's youth wing, the Jusos, who are led by popular 28-year-old Kevin Kühnert, are continuing to oppose the deal and will be staging events across Germany in the days to come, trying to get members to vote no. SPD enrollment has increased by some 25,000 in recent weeks, and there has been speculation that many new members may have joined specifically in order to oppose the grand coalition.

Pros and contras on the road

On the evening of Monday, February 19, Kühnert faced off with SPD General Secretary Lars Klingbeil in a town hall-style meeting to woo hundreds of SPD party members in the town of Ludwigsfelde near Berlin.

The arguments weren't new. Both men agreed that the Social Democrats had extracted a number of concessions from Merkel and the conservatives in coalition negotiations. Klingbeil argued that they were enough to justify a yes vote, while Kühnert reiterated his pleas for the SPD to nix the deal — even if it meant fresh elections.

The crowd seemed to be roughly evenly split — with perhaps a slight edge for those who favored the coalition. Young people were more apt to be skeptical, while older party members praised what they felt their negotiators had achieved.

The mood was very civil, with the only truly tense moment coming when a young SPD member accused the party leadership of "betraying its ideals." That drew an angry response from Klingbeil. On the whole, it seemed unlikely that either he or Kühnert changed many minds.

Leaders on both sides have said that they would abide by and support the party members vote. The event in Ludwigsfelde is the first in a series of such SPD discussions scheduled in various parts of Germany over the next fourteen days.

Is the SPD vote even constitutional?

Germany's road to its next government has been long, and the deal still isn't done

Yet even as both the conservative and Social Democratic leaderships seek approval of the coalition deal, there has been criticism among some prominent CDU members of the SPD member referendum.

The influential state premier of Rhineland Palatinate, Julia Klöckner, accused SPD leaders of "delegating away" authority by giving the rank-and-file the chance to make the final decision.

"The SPD leadership should lead instead of causing confusion," Klöckner told a group of German newspapers.

Others, including some political scientists, have questioned whether it's constitutional to give SPD members what amounts to a right of veto over the next government. Five complaints have been filed with Germany's Constitutional Court, but the judges have refused to hear them.

So, essentially, the SPD's procedure has been deemed legal. The 450,000-plus rank-and-file now have two weeks to fill out and return their ballots, after which all of Germany will learn whether Merkel will able to form a third grand coalition or not.